As Hanukka reaches its halfway point, here are some great places to eat delicious holiday treats while you still can.

By LOREN MINSKY/ TRAVELJERUSALEM.COM TEAM
Doughnuts
(photo credit: Courtesy)
Advertisement
Even though the festival is already a few days old, it's hard not to continue indulging this Hanukka with mouthwatering doughnuts of every variation in Jerusalem. These are some of the more popular ones, but it really depends on how you like them.

Marzipan BakeryMarzipan offers an array of tempting doughnuts that manage to get the texture and balance of ingredients just right. Those who enjoy the traditional sugar-coated doughnut with red jelly filling will love Marzipan's with its generous well distributed filling – just how you remember it as a kid but with a boutique bakery twist. 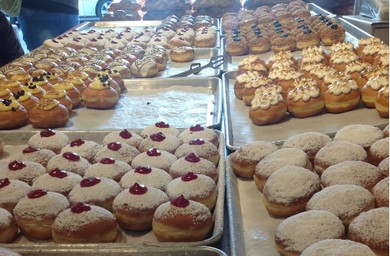 Another popular flavor is the chocolate and coconut, which has a gooey chocolate center that contrasts well with the chocolate and toasted coconut topping. The one with a meringue topping is something different and very satisfying. Marzipan's doughnuts are competitively priced at NIS 5 per doughnut.

Brooklyn BakeshopBrooklyn Bakeshop is the place to head to if you're looking for amazing American-style doughnuts. The bakery moved a few months ago from Geula to the heart of Mea Shearim taking its loyal largely American customer base with it.
The doughnuts are made slowly and deliberately and this comes through in their taste and texture. Available in around 30 delicious flavors, one of the best sellers this year is the Long John doughnut with Bavarian cream on the inside and chocolate on the top.

Phone: (02) 538-0630
Address: 15 Mea Shearim RoadCafé KadoshThe doughnuts from the esteemed European-style bakery Café Kadosh are as fine and indulgent as you'd expect them to be. As ever, owners Izik and Keren Kadosh have used the best of the best full dairy ingredients such as real butter instead of margarine. 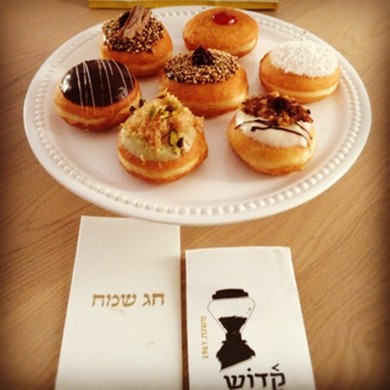 The doughnuts are available in regular jam as well as a whole lot of other gourmet and unique flavors such as nougat, pistachio and dulche de leche. Made on site every two hours these doughnuts are fresh and as hard to resist as it gets. The doughnuts range in price from NIS6 (regular) to NIS 10.Phone: (02) 625-4210
Address: 6 Shlomtsion Hamalka StreetBeit Halechem Shel ChavaThis modest bakery store situated in the outdoor market on Jaffa Street can easily be overlooked, but offers very tasty doughnuts. The best (or worst) part is that they are fried right in front of you so you get to see the vast quantities of sizzling oil that is used. The doughnuts are moderately priced at NIS3 or NIS4 per doughnut and come in several flavors including a very simple one with just a scattering of icing sugar.

Phone: (02) 623-3379
Address: 119 Jaffa RoadRoladinThe doughnuts at Roladin Bakery score high on creativity and appearance and are truly almost too beautiful and designer to eat. The recommended doughnut of the season is the black forest variation - a cream-filled doughnut coated in dark chocolate accompanied by a cherry chaser to squirt into the doughnut for a burst of flavor as you require it. 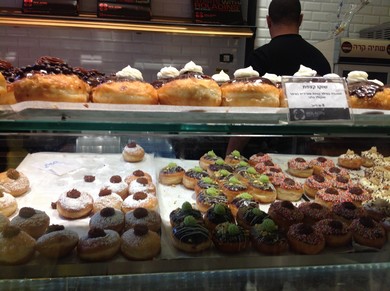 Another special one is the tiramisu flavor with its rich mascarpone cheese filling, white chocolate coating and café latte chaser that brings the doughnut alive. They don’t come cheap, however, at a hefty NIS 8 – NIS 9.50 per doughnut.Phone: (02) 622-2021
Address: 12 Hillel Street

ITravelJerusalem.com is a new online international travel portal offering all the latest information on things to do, places to eat and places to stay in Jerusalem.Follow @JPost_Lifestyle
Advertisement
Subscribe for our daily newsletter