A treasure for diving

Review: Eilat's Aqua Sport club has a lot going for it.

By DOV PREMINGER
JULY 26, 2010 18:03
Aqua Sport boat 311
(photo credit: Aqua Sport)
Advertisement
Eilat's coral beach is packed with establishments offering scuba diving, equipment rental and certification courses. Among these is the Aqua Sport Diving Center, which caters to beginners and pros alike. Established in 1962, it's the oldest dive center in Eilat. It's also the only large operation with its own big stretch of beach, a bar, and beautiful women in bikinis.The place has a great feel to it. "What people always comment on here is the atmosphere," says manager Yuval Goren. "It's fun here." RELATED:
The world's best job
Exotic, but not extreme
Out of the blueFirst ­ to rewind a little ­ if you don't know much about scuba diving, suffice to say that it involves strapping on a mask and an oxygen tank, and descending 10 to 30 meters below the surface to explore the scenery. Scuba diving gives a sense of flying and weightlessness, and the underwater panoramas are gorgeous and inspiring ­ Avatar director James Cameron is an avid scuba diver, and has said many of the movie's stunning environments were derived from his experiences under the surface. 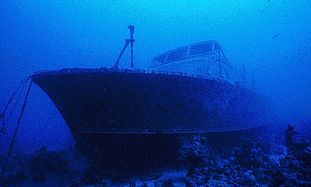 Sunken wreck divingIsrael is one of only a few countries with opportunities for warm-water scuba diving. There are about a dozen dive centers in Eilat. The big three are Aqua Sport, Marina Divers and Manta Dive Center, each of which provides guided dives, boats, instructors, courses, equipment and accommodations.Prices at the big three diving centers are virtually the same. Full dive equipment rental is about NIS 135 per day, plus a small amount for air tank fill. An introductory course, for those who only want to try out diving, is NIS 220, equipment included. A guided boat dive to scenic locales for those already certified comes to NIS 250 including equipment. A full certification course costs NIS 1,150.Aqua Sport also has two locations in the Sinai ­ where the truly world-class diving is ­ and will take you there by boat for a two-dive trip for some NIS 370, lunch included.There's also a 40-room dive hostel for those wishing to stay the night. The rooms are very simple ­ white walls and bunk beds, no soap or cleaning service provided ­ but, at NIS 85 per night if you're diving, they are cheap, and they have great air conditioning.Aqua Sport also has a grill, bar and lounge right on the beach, for some rest and relaxation after your dive.Though Aqua Sport's history dates back to its founding, it is currently run by owners Craig and Dafna Budden, who took a stake in the club in 1992, parlaying it into full ownership in 1996.Craig Budden sets the tone at Aqua Sport. The 52-year-old former commercial diver comes across as friendly, and highly competent. Having a drink with me at the bar, he refused to take a stool lest he deny one of his customers a seating option.Budden will keep anywhere from 15 to 25 scuba instructors on staff, depending on the season. They're all young, friendly and professional ­ and they love their work. 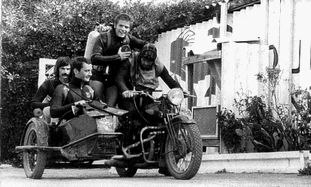 "It's the most fantastic, satisfying, relaxing, job in the world," says Moran Moreno, a dive instructor at the club, giving voice to a sentiment that seems to be shared by the rest of the instructors.According to Ran Franco, a senior instructor, the staff of Aqua Sport is like a family. "All the people working as instructors, ­ we hang out together, we go out together as a group. I know everyone." Besides the friendly atmosphere, part of Aqua Sport's charm is its location.It's the only big diving club that's right on the beach. As manager Yuval Goren describes it, you can "step out of the classroom and into the water." The place is also famous for its parties, which take place about once a month. "The whole diving community in Eilat will come ­ divers, instructors," says Franco. "Eilat is a very small community." For Hanukka, the club fashions a hanukkia out of eight empty scuba tanks, setting aside a giant, ninth oxygen tank for a shamash.The dive center also takes part in various dive competitions and promotions, along with the rest of the community. Earlier in June, there was a four-part competition involving underwater navigation, rescue diving, and "aquathlon wrestling" ­ where scuba divers attached anklets to their feet and tried to steal the opposing wrestlers' anklets underwater ­ in the nearby Manta Divers' pool.According to Budden, Aqua Sport sets the industry standard for diving in Israel. Would-be instructors at the club go through an interview and a few weeks of dive-alongs with senior instructors to make sure they know how to conduct themselves.

Files are maintained on every diver, logged by instructors after each dive, which list their strengths and weaknesses. These files are passed on to the clients' next dive guides, indicating which areas to watch for.Moreno says that kind of preemptive lookout is what's important. "You know who to keep closer to you, and who is a better diver," she says. "If you can read it well [beforehand], even if you got into a risky point, you'll probably get out without trouble." For reservations at Aqua Sport, call (08) 633-4404.The writer was a guest of the club.
Advertisement
Subscribe for our daily newsletter