ANALYSIS: Trump has offered no evidence that he will grovel for forgiveness over the remarks he made about groping and objectifying married women 11 years ago, when he was 59 years old. 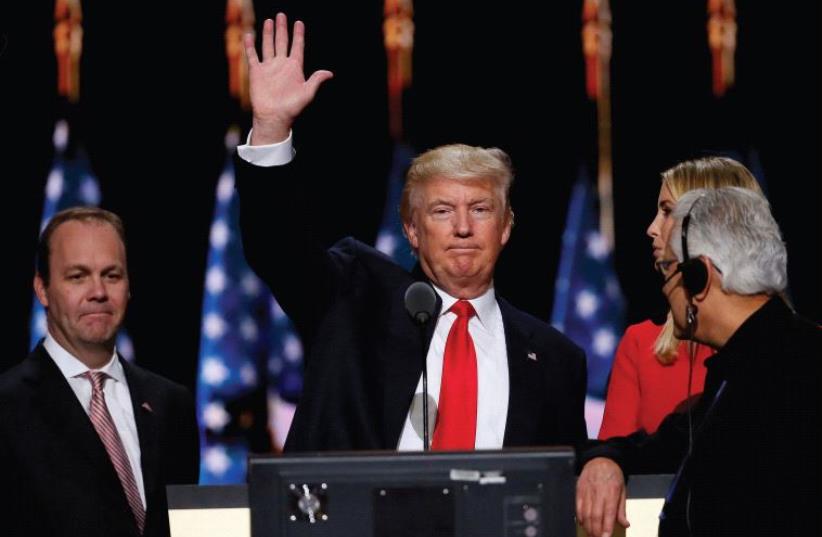 Republican presidential nominee Donald Trump waves during his walk through at the Republican National Convention in Cleveland on July 21
(photo credit: REUTERS)
Advertisement
WASHINGTON – In defending Donald Trump’s comments on sexual aggression, former New York mayor Rudy Giuliani suggested on Sunday morning that he take on a role model in Augustine of Hippo.A sinful youth who purified himself through Christian faith, Augustine cataloged his transformation in Confessions, written in 400 CE as a series of appeals to God. Sinfulness is not a character trait, Giuliani argued on CBS News, but amounts to individual actions that can be left in the past.Trump now faces one last chance to atone – if not to God, than to the American people – for decades’ worth of individual actions that have left untold numbers of women, blacks, disabled, Hispanics, Jews, Muslims and faithful Christians deeply offended along the way. His own personal journey toward atonement is separate and apart from his exceptional request of his fellow countrymen to forgive him for a lifelong record of transgressions on his road to the presidency.Some pundits are skeptical that Trump is conceptually capable of undergoing an Augustine moment just one month before the November 8 election. “It seems to me that Donald Trump may speak to his essential nature,” said conservative columnist Peggy Noonan of The Wall Street Journal.

That is the question currently gripping America’s public square: Not whether Trump the man is worthy of forgiveness, but whether Trump the public figure can ever be resuscitated and entrusted with the national interest.“From the fullness of the heart, the mouth speaks,” Tim Kaine, the Democratic candidate for vice president, said this week of Trump, quoting the Gospel of Matthew.The Republican nominee for president did not go to church on Sunday. He went to St. Louis to debate his rival, Hillary Rodham Clinton, for the second time. And that venue will serve as his stage for public atonement as the world watches, and as Jews worldwide prepare for Kol Nidre on the holiest night of the year, when the community reflects on the process of repentance, on moral obligation and on the religious requirement to correct misdeeds.“As Jews, we understand what it means to repent for sins and ask God for forgiveness,” said Ron Klein, chairman of Jews for Progress and a former congressman from Boca Raton, Florida. “Human nature is to give people the benefit of the doubt in terms of their capacity to heal and move forward. But there are limits, and someone who repeatedly makes transgressions or sins and is unwilling to say I’m sorry for a whole series of attacks – that is not what most people feel is the religious interpretation of building a better life.”Trump has offered no evidence that he will grovel for forgiveness over the remarks he made about groping and objectifying married women 11 years ago, when he was 59 years old, and his third wife was home, pregnant with his fifth child. The 2005 recording reinforced months of derogatory statements Trump has made about women throughout his unpredictable campaign for president.Apologizing in videotaped remarks on Friday night, Trump – the man who in the past year has picked a fight with the pope – called the tape a “distraction” from a discussion on policy dilemmas facing the country. He then pivoted to attack Clinton for her husband’s transgressions.Shmuley Boteach, an Orthodox rabbi who has said that Trump would be a better president for Israel while expressing reservations about his candidacy, wrote on Twitter that the Republican candidate’s comments on women run contrary to Jewish values. They were “obviously deplorable, and contravene all Jewish and moral values about treating women with equal dignity and respect,” Boteach wrote.The Republican Jewish Coalition declined repeated requests for comment on Trump’s remarks.“We pray for his family and look forward to the opportunity he has to show what is in his heart,” Mike Pence, Trump’s vice presidential running mate, who self-describes as “Christian first,” said over the weekend.Trump, a Presbyterian, speaks infrequently about his religion. But he has repeatedly said that he lives his life unapologetically. In a June conversation with Cal Thomas, a popular Christian columnist, he suggested that apologies to his God were no exception.“Hopefully I won’t have to be asking for much forgiveness,” Trump said.