“Today, we’re facing a presidential candidate who has no conception of religious liberty – or civil liberty for that matter.” 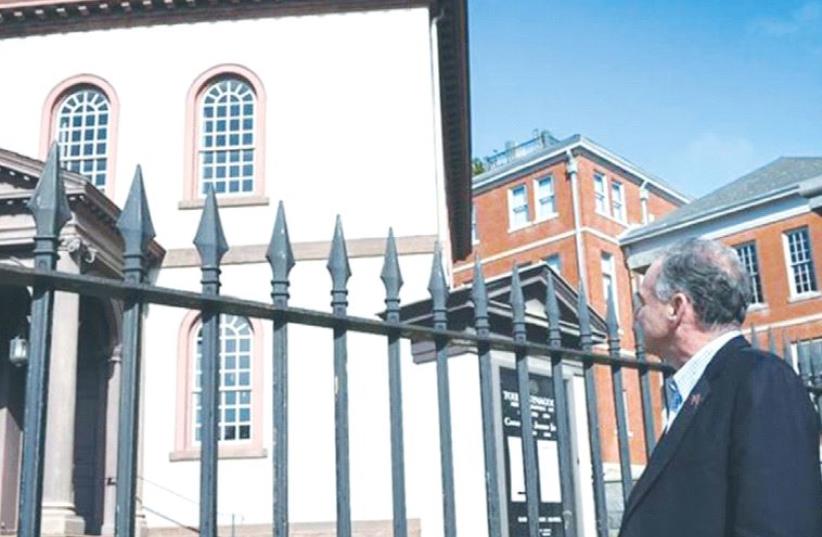 DEMOCRATIC VICE PRESIDENTIAL candidate Tim Kaine pauses outside the Touro Synagogue in Rhode Island last week.
(photo credit: FACEBOOK)
Advertisement
WASHINGTON – Democratic vice presidential nominee Tim Kaine visited a synagogue last week made famous by the nation’s first president, George Washington, who reflected there on the importance of religious freedom 226 years ago.At Touro Synagogue in Rhode Island, Kaine reflected on the ongoing struggle to maintain such freedoms amid debate within the US presidential campaign over the rights and dignity of Muslim-American citizens.“We stumbled on the Touro Synagogue,” reads a post on Kaine’s Facebook page. “Today, we’re facing a presidential candidate who has no conception of religious liberty – or civil liberty for that matter.”His attack on Donald Trump, the Republican nominee, comes just days after the GOP candidate renewed his call for an “ideology test” for new immigrants to the United States. Trump did not specify what the test would include, but he said the new screening effort would attempt to weed out immigrant and refugee applicants with sympathies toward “radical Islam” and who express “hostility” toward the US and its “principles.”Trump also did not specify what he interprets those principles to be.“Millions of Americans – not just Jews, but Muslims, LGBT Americans, those with disabilities – worry about their place in society and what Donald Trump’s divisive words mean for them,” Kaine wrote. “It’s wrong, and frankly, it’s un-American. We don’t need a president who will further divide us – we need one who will bring us together. And that’s exactly what Hillary Clinton will do.”The post quotes Washington’s own statement on religious freedom from Touro Synagogue in August of 1790, in what’s known as his letter to the Jews of Newport: “For happily the Government of the United States gives to bigotry no sanction, to persecution no assistance, requires only that they who live under its protection should demean [likely meaning at the time – conduct] themselves as good citizens, in giving it on all occasions their effectual support.”