Democrats would declare that Palestinians "should be free to govern themselves in their own viable state, in peace and in dignity." 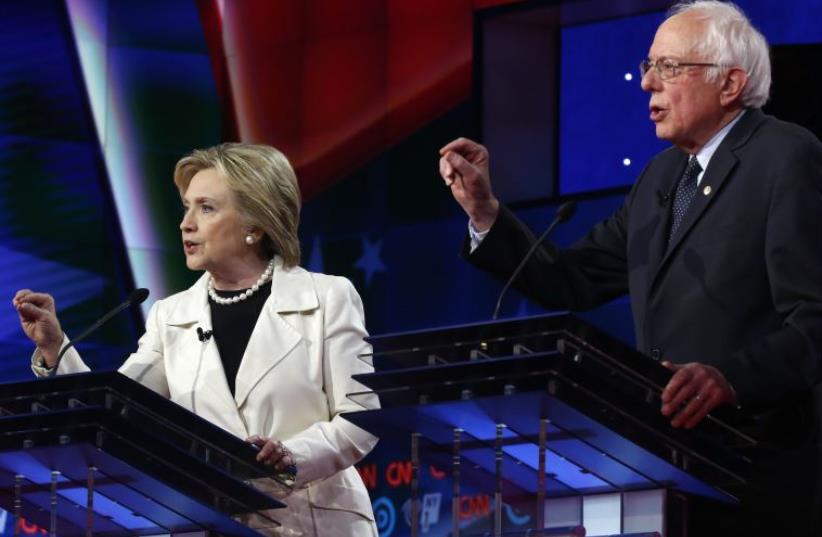 DATE IMPORTED: April 15, 2016 Democratic U.S. presidential candidate Hillary Clinton (L) listens to Senator Bernie Sanders speak during a Democratic debate hosted by CNN and New York One at the Brooklyn Navy Yard in New York April 14, 2016.
(photo credit: REUTERS)
Advertisement
WASHINGTON – The Democratic Party plans to declare in its platform opposition to the Boycott, Divestment and Sanctions Movement, a top priority for the party’s presumptive presidential nominee, Hillary Clinton, The Jerusalem Post has learned.In a detailed briefing on the platform's language exclusive to the Post, the Democrats are said to declare that the Palestinians “should be free to govern themselves in their own viable state, in peace and in dignity.”The party will also recommit itself to maintaining Israel’s qualitative military edge in the region and “oppose any effort to delegitimize Israel, including at the United Nations or through the Boycott, Divestment and Sanctions Movement.” Both of these commitments are new to the Democratic Party platform.Utilizing similar language from its 2008 and 2012 platforms, the party once again recognizes Jerusalem as Israel’s capital, and states that while the city should remain undivided, its final status should be left to direct negotiations between Israel and the Palestinians.In 2012, a line in the policy platform recognizing Jerusalem as the capital of Israel was dropped, but a day later it was reinstated. The reintroduction of the line was equally controversial, and its clumsy handling resulted in a confusing vote and booing on the convention floor.The language in this year’s version was agreed upon by platform committee members at a meeting in St. Louis over the weekend. Their draft will be presented to the full platform committee in Orlando at the beginning of next month.The new language on respecting Palestinian dignity reflects longstanding Democratic and Israeli attitudes toward a two-state solution – an outcome once again endorsed by the platform committee.Delivering a hallmark speech at Bar-Ilan University in 2009, Prime Minister Benjamin Netanyahu said that in his vision of peace, “there are two free peoples living side by side in this small land, with good neighborly relations and mutual respect, each with its flag, anthem and government, with neither one threatening its neighbor’s security and existence.” The platform reflects this language, according to one senior party member familiar with the negotiations.But reference to BDS is brand new, and reflects Clinton’s concern with the festering movement – an “alarming” political movement, Clinton said in April, “to malign and isolate the Jewish people.”Furthermore, the language states that “a strong and secure Israel is vital to the United States, because we share overarching strategic interests and the common values.” In its section on the Middle East, the platform members – who voted 8-5 in favor of the language – also endorse more inclusive governance in Iraq and Syria. Those on the committee appointed by Sen. Bernie Sanders of Vermont have been lobbying for reference to Israel’s “occupation” and its “settlement activity” in the West Bank.Neither term ultimately made it onto the platform, although future negotiations are possible in Orlando and in Philadelphia, where the convention will be held July 25-28.