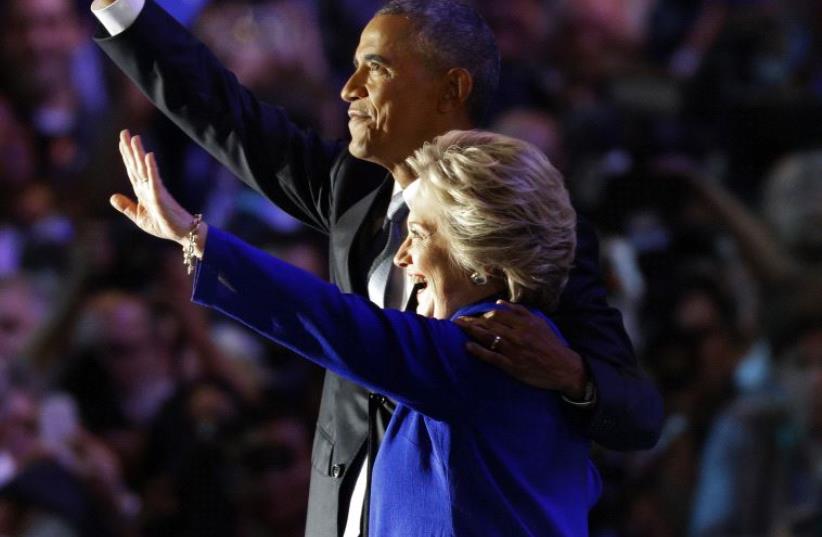 US President Barack Obama and Hillary Clinton
(photo credit: REUTERS)
Advertisement
PHILADELPHIA -- The 2016 presidential election is not about Democrat or Republican, liberal or conservative policies, but about the "American experiment of self-government"– democracy itself, US President Barack Obama told the Democratic National Convention on Wednesday night.
The speech outlined a "big choice" before the American people come November– an atypical election between liberal democratic ideals and a dangerous, illiberal demagogue.
"It’s not just a choice between parties or policies; the usual debates between left and right," Obama said. "This is a more fundamental choice– about who we are as a people."
"Anyone who threatens our values, whether fascists or communists or jihadists or homegrown demagogues, will always fail in the end," he said. "That's America." "What we heard in Cleveland last week wasn’t particularly Republican – and it sure wasn’t conservative. What we heard was a deeply pessimistic vision of a country where we turn against each other, and turn away from the rest of the world," he said. "Our power doesn’t come from some self-declared savior promising that he alone can restore order," he added. "We don’t look to be ruled." Obama said the choice between Democratic presidential nominee Hillary Clinton and Republican nominee Donald Trump becomes particularly clear when considering national security matters.Trump "cozies up to Putin, praises Saddam Hussein, and tells the NATO allies that stood by our side after 9/11 that they have to pay up if they want our protection," Obama said. "Well, America’s promises do not come with a price tag. We meet our commitments. And that’s one reason why almost every country on Earth sees America as stronger and more respected today than they did eight years ago." The president has said that no candidate has ever been more qualified than Clinton to run for the Oval Office. Earlier on Wednesday night, Obama's vice president, Joe Biden, said that Trump is the least prepared candidate ever– of any major political party."I’m asking you to join me– to reject cynicism, reject fear, to summon what’s best in us," Obama concluded, "to elect Hillary Clinton as the next President of the United States, and show the world we still believe in the promise of this great nation."