By REUTERS
Egypt funeral 311
(photo credit: REUTERS)
Advertisement
CAIRO - Soldiers beat demonstrators with batons in Cairo's Tahrir Square on Saturday in a second day of clashes that have killed ten people and wounded more than 300, marring the first free election most Egyptians can remember.Protesters fled into side streets to escape the troops in riot gear, who grabbed people and battered them repeatedly even after they had been beaten to the ground, a Reuters journalist said. Shots were fired in the air.RELATED:
Egypt votes in 2nd round, Islamist win forecasted
Egyptian elections: The military’s window of opportunity?Soldiers pulled down protester tents and set them on fire, local television footage showed.In footage filmed by Reuters one soldier in a line of charging troops drew a pistol and fired a shot at retreating protesters.The violence highlights tensions in Egypt 10 months after a popular revolt toppled President Hosni Mubarak. 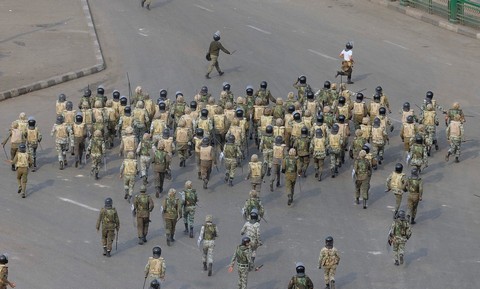 The army generals who replaced him have angered some Egyptians by seeming reluctant to give up power. Others back the military as a force for badly needed stability during a difficult transition to democracy.The army assault on Saturday followed skirmishes between protesters and troops. A fire destroyed archives in a building next to Tahrir, including historic documents dating back over two centuries. 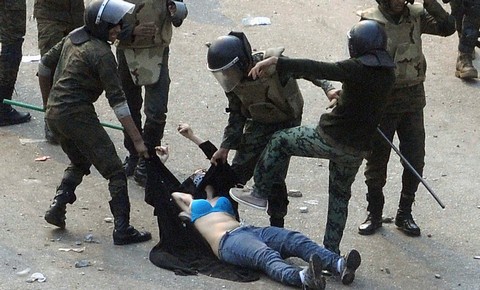 An official blamed petrol bombs for starting the blaze, the state news agency MENA reported.An army official said in a statement troops targeted thugs not protesters after shots were fired at soldiers and petrol bombs set the archive building ablaze, MENA reported.The bloodshed follows unrest in which 42 people were killed in the week before Nov. 28, the start of a phased parliamentary poll that is empowering Islamist parties repressed during the 30-year Mubarak era, when elections were routinely rigged.Voting in the second round of a drawn-out election process seen as part of a promised transition from army to civilian rule by July passed off peacefully on Wednesday and Thursday.Friday's clashes pitted thousands of demonstrators against soldiers and plainclothes men who were seen at one point hurling rocks from the roof of a parliament building.Army vehicles and soldiers were deployed at roads leading into Tahrir Square, the hub of the anti-Mubarak uprising.Egyptian PM says protesters "attacking the revolution"The army-appointed prime minister, Kamal al-Ganzouri, blamed the violence on protesters he accused of attacking the cabinet and parliament buildings that security forces had to defend."I address all political forces and groups, saying Egypt is in your hands. What is happening in the streets today is not a revolution, rather it is an attack on the revolution," he said."I still say we will not confront any peaceful protests with any kind of violence even by words," the prime minister said on state television in his first public comments on the unrest. He echoed an army statement saying no live fire was used. 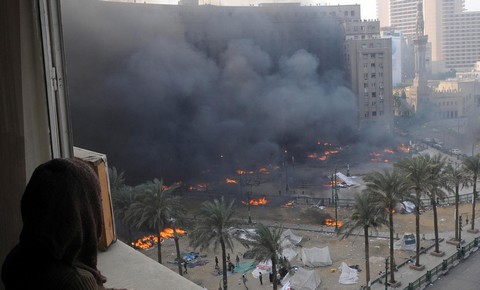 State television put the death toll at ten and said 313 were wounded. Ganzouri, 78, earlier said 125 of the wounded were in hospital. Thirty security guards outside parliament had been hurt and 18 people had gunshot wounds.Officials have in the past blamed third parties or thugs for shooting during protests in which people were hit by gunfire.Those in Tahrir Square and some others are infuriated by the army's perceived reluctance to quit power. Criticism has been focused on Field Marshal Mohamed Hussein Tantawi, head of the army council and who was Mubarak's defence minister."This is happening because Tantawi is dirty and he is ruling the country the same way Hosni ruled it," said a taxi driver near the square.But other Egyptians, desperate for order, voiced frustration about the unrest that has battered the economy."We can't work, we can't live, and because of what? Because of some thugs who have taken control of the square and destroyed our lives. Those are no revolutionaries," said Mohamed Abdel Halim, a 21-year-old who runs a store near Tahrir.
Advertisement
Subscribe for our daily newsletter