Sights and Insights: Where happy explorers go to dig

Dr. Wayne Stiles explains why even though he has been to Tel Beit Shean a number of times, he always looks forward to returning.

By WAYNE STILES
Beit Shean 311
(photo credit: Wayne Stiles )
Advertisement
Wayne Stiles is an author who has never recovered from his travels in Israel—and loves to write about them from his desk in Texas.With pen in hand in 1896, George Adam Smith wrote of Tel Beit Shean: “There are few sites which promise richer spoil beneath their rubbish to the first happy explorer with permission to excavate."A century later, the happy explorers proved Smith correct. From 1989 to 1996, archaeologists partially excavated the ruins below Tel Beit Shean. As a result, whenever I walk among the finds, I feel like I’m stepping back in time. Beit Shean offers the largest, and some of the best-preserved ruins in all of Israel. 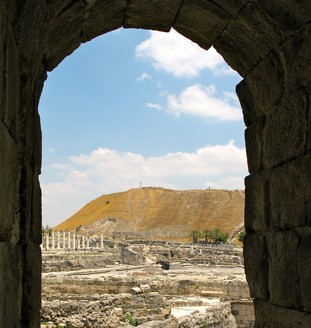 Photo Wayne StilesAs with most ancient sites in the Holy Land, geography explains the reasons for Beit Shean’s significance. For thousands of years, Beit Shean stood as Canaan’s front door to all westbound traffic from the Jordan Valley to the strategic Jezreel Valley and the Mediterranean Sea. Its surroundings are fertile with abundant water. Perhaps its strategic position gave Beit Shean its name, “House of Security.”But the excellent location proved to be a double-edged sword. Every nation wanted control of Beit Shean. And whoever held it always seemed to contend with those who would wrench it from their grasp. Egypt dominated the land of Canaan just prior to the Exodus (1446 B.C.), and Beit Shean served as the primary city of the region. In ancient Israel, Joshua allotted the city to the tribe of Manasseh (Joshua 17:11). But Manasseh failed to drive out the Canaanites who lived there, and half of Manasseh settled across the Jordan Valley in what is modern Jordan (Judges 1:27). During the reign of King Saul, the Philistines controlled Beit Shean. In fact, after Saul’s tragic death on nearby Mount Gilboa, the Philistines fastened the decapitated bodies of Saul and his sons to the wall of Beit Shean in the open square (1 Samuel 31:10-12; 2 Samuel 21:12). The city remained a thorn in the side of Israel until the time of David and Solomon (Judges 2:3; 1 Kings 4:12). After Alexander the Great swept across the Middle East, Beit Shean was renamed Scythopolis (“City of the Scythians”) and became a prosperous Greek city. Once Rome gained control of Israel in the first century BC, Scythopolis became one of the cities of the Decapolis, the only one of the “ten cities” west side of the Jordan River. During the Byzantine era, Scythopolis served as a major center for Christianity. 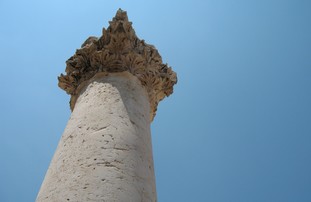 Photo: Wayne StilesAn earthquake in AD 749 toppled many of the city’s great structures and put the death blow to its prosperity. At the base of the tell today, columns still lay on their sides where they fell. The most impressive ruins discovered in Beit Shean come from the Roman and Byzantine times. Archeologists have discovered, among many finds, an amphitheater where gladiators fought, a public bathhouse—the largest discovered in Israel—and a theater that could seat between 6,500 and 7000 people. The colonnade along the original Byzantine street is nothing short of spectacular. The Roman-Byzantine ruins lay in the shadow of the ancient tell itself, the original site of Beit Shean. Tel Beit Shean appears as a huge hill, bulging eighty meters high (260 feet) from the eastern end of the Harod Valley, with over a dozen layers of occupation beneath its topsoil. The steep climb to the top of the tell offers an impressive panorama of the Roman-Byzantine city, as well as the Jordan Valley to the east, and the Harod Valley and Mount Gilboa to the west. Walking among the ruins of Beit Shean is simply stunning. It allows any visitor to be, in George Adam Smith’s words, a “happy explorer.” As many times as I’ve been there, I always look forward to returning.What to Do There: Enter the National Park and explore the Roman-Byzantine ruins on your way to the tell itself. If you choose to climb the stairs to the top of the tell, you will be rewarded with a magnificent view as well as the opportunity to see archaeological ruins most visitors never see. How to Get There: From Tiberias, take Route 90 south for 39 km and follow the signs.Video is courtesy of Insight for Living.Read Wayne’s blog at www.waynestiles.com