Constitutional proposal that would shield military from parliamentary oversight sparked protests that have killed over 40.

By JPOST.COM STAFF, REUTERS
NOVEMBER 27, 2011 15:31
Muhammad Tantawi
(photo credit: REUTERS)
Advertisement
Head of Egypt's Supreme Council of Armed Forces (SCAF) Field Marshall Mohamed Hussein Tantwai said that the military would not back down from the role it sees for itself in the country's new constitution, Egyptian state-owned newspaper Al-Ahram reported Sunday.The constitutional proposal, which would shield Egypt’s powerful military from parliamentary oversight, sparked protests in Cairo and Alexandria that have been ongoing for over a week and led to the resignation of the country's caretaker government.RELATED:
'Egyptian PM asks protesters for 2 months'
New prime minister exposes divisions in Egypt“The position of the armed forces will remain as it is," Tantawi told reporters in Cairo. "It will not change in any new constitution."Protesters gathered again in Cairo's Tahrir Square on Sunday to try to evict the generals who replaced Hosni Mubarak, in a trial of strength that has muddied the run-up to Egypt's first vote since a popular revolt deposed the former leader.

Click for special JPost coverageThe SCAF leader also addressed parliamentary elections slated to begin Monday, calling on Egyptians to head to the polls "without any worries.""The elections will begin tomorrow as planned," he said.Egypt's military, Tantawi added, "will cooperate with the Interior Ministry to secure the whole process," Al-Ahram reported.The parliamentary election is the first step on the ruling military council's timetable towards a transfer to civilian rule, now promised for July.But the demonstrators want the council to step aside now in favor of a civilian interim administration and reject its choice of 78-year-old Kamal Ganzouri to form the next cabinet.Other Egyptians yearn for stability after a week of bloodshed that has killed 42 people and wounded over 2,000, preferring for now to let the generals run a nation whose political turmoil has thrust the economy deeper into crisis.Earlier, Al-Ahram quoted Tantawi as saying: "We are at a crossroads. There are only two routes, the success of elections leading Egypt towards safety or facing dangerous hurdles that we in the armed forces, as part of the Egyptian people, will not allow." 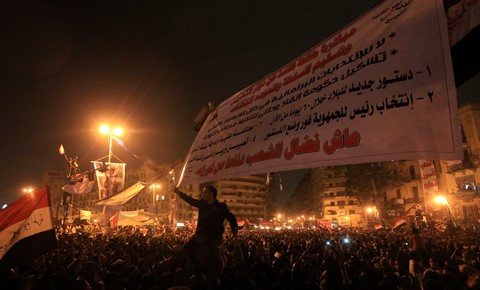 Protests in CairoBasam Sharaf, among protesters outside parliament, said the objection to Ganzouri was not his age, but the policies he pursued as prime minister under Mubarak from 1996 to 1999."Two-thirds of the ministers that Ganzouri appointed in his day are now in Tora prison," he said, referring to Mubarak-era officials accused of corruption and other offenses who were put on trial after an uprising swept Mubarak from power in February. 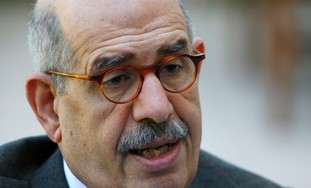 Egyptian presidential candidate Mohamed ElBaradei (Reuters)Some protesters favor Mohamed ElBaradei, former head of the UN nuclear watchdog, who has offered to drop his campaign for the presidency and to lead a government of national unity."We are trying to create a government that represents the revolution and the people's demands," said protester Hiba Hani. "We have no faith in Ganzouri or anyone brought in with him."ElBaradei is respected among pro-democracy campaigners and has a high international profile, but many Egyptians view him as out of touch because he spent much of his career abroad.There was no sign that the generals would change course, although the latest unrest has already forced them accelerate plans to hand over to civilian rule.Islamist parties banned under Mubarak have been campaigning hard to secure a strong foothold in mainstream politics.Muslim Brotherhood leader Mohamed Badie said what was important was the composition and powers of Ganzouri's cabinet, Egypt's fourth this year."We have suffered from three cabinets that had no powers and the end-result was failure that has been suffered by the Egyptian people," he said late on Saturday.Badie suggested conspiratorial hands were at work in the unrest. "There are powers from inside and outside Egypt that don't want stability for Egypt or development, and this is something that is being pushed and paid for," he declared.The vote due to start on Monday is billed as Egypt's first free and fair election in decades, but a confusing array of candidates and parties and fears of bullying, bribery and violence at polling stations offer voters a daunting challenge.
Advertisement
Subscribe for our daily newsletter