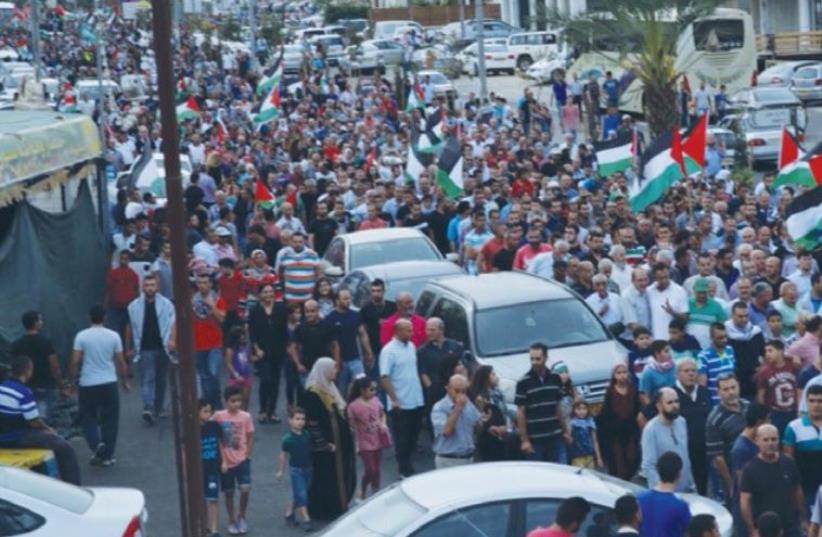 DEMONSTRATORS GATHER in Sakhnin, October 13, 2015
(photo credit: JOINT ARAB LIST)
Advertisement
Thousands of Israeli Arabs protested in the Western Galilee city of Sakhnin on Tuesday in support of the Palestinian “struggle” and held a general strike throughout the country.The strike and protest, organized by the Arab Higher Monitoring Committee, shut businesses and schools.“Our struggle, that of the Israeli Arab public, is a popular political parliamentary and legal one, but not a violent one,” Joint List MK and Ta’al chairman Ahmad Tibi said at the protest, adding that Prime Minister Benjamin Netanyahu’s government was “playing with fire when it comes to al-Aksa.”Tibi ruled out resorting to violence, saying “that is how it was [nonviolent] and how it will be.”He accused Netanyahu and his government’s ministers of incitement and oppression of the Palestinians, both of which are “motivating the Palestinians who are struggling against the occupation.”Joint List MK and Balad chairman Jamal Zahalka, who also participated in the demonstration, said, “We demand the immediate cessation of entry of the crazy right wing to al-Aksa Mosque and the removal of all restrictions to the entry of Arabs and Muslims.“We warn against attacking Arab women and men in Jewish cities, and condemn the silence of the police over the abuse against Arab citizens,” he said, adding that they also object to Netanyahu’s intention to outlaw the Northern Branch of the Islamic Movement.Joint List and Hadash party chairman Ayman Odeh said after the demonstration that the Arab public “proved once again that Israeli Arabs know how to choose the most appropriate tool for the struggle.“The cause is just – ending the occupation and establishing a Palestinian state within the 1967 borders,” he said.He praised the sector’s effort in upholding the strike and for the large turnout at the demonstration. “The Arab minority is under a governmental onslaught of incitement and hatred,” he said.The Arab Higher Monitoring Committee, an organization that coordinates Arab political action, is made up of Arab MKs, municipal leaders and other community figures.Joint List MK Yousef Jabareen (Hadash) told The Jerusalem Post that the Arab sector strike was very successful, reflecting the community’s “protest against the cruelty of the security forces and the incitement against our community in addition to the provocative settler activity at al-Aksa that started the current events.”Marwa Atamna, an Arab journalist based in Nazareth who writes for the local Hadith Al-Nas newspaper, told the Post the situation is not good and that the violence is hurting both sides.Meanwhile, Raed Salah, the head of the Northern Branch of the Islamic Movement, said he was willing to the pay the price of going to jail or death for the struggle.“I hope his wish is realized soon,” Yisrael Beytenu chairman Avigdor Liberman responded on Twitter.Odeh also called on Attorney-General Yehuda Weinstein to indict Netanyahu for inciting racial hatred and defamation for his speech to the Knesset on Monday in which he said Joint List MKs were inciting to violence and that “behind them there is a trail of Islamic State flags.”In a letter to Weinstein, Odeh wrote that “instead of spreading lies, the prime minister should have backed the Knesset members from the Joint List who strongly condemn the Islamic State terrorist organization and who, on every platform, oppose the killing of innocent people and bloodshed.”In his speech, Netanyahu called on Israeli Arabs to choose between incitement or coexistence and peace.“You cannot... enjoy all the rights and at the same time undermine the state. I ask you to choose the right path,” he said.The prime minister called out specific Joint List MKs he said had justified murder.MK Haneen Zoabi “justifies acts of terrorism everywhere. She said, with great concern, to a Hamas newspaper two days ago that ‘actions by individuals are not enough, ‘you need a full intifada.’ It’s unbelievable.An MK in Israel is calling for mass terrorism against Israeli citizens. There is nothing more justified than a criminal investigation against her,” Netanyahu said.

Lahav Harkov and Reuters contributed to this report.
Advertisement
Subscribe for our daily newsletter