Bennett: We will annex Ma’aleh Adumim first and then all of Area C

“Citizens of Israel have paid in no end of victims, and no end of denunciations for this messianic policy of a Palestinian state,” said Bennett. 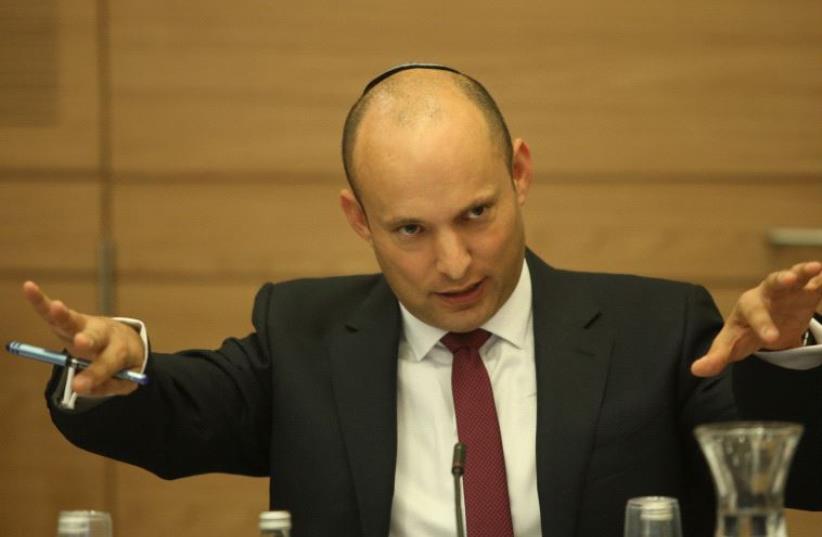 Naftali Bennett
(photo credit: MARC ISRAEL SELLEM)
Advertisement
Bayit Yehudi chairman Naftali Bennett said on Monday that his party will advance a law to annex Ma’aleh Adumim by the end of this month as part of a strategy to annex all of Area C in the West Bank.Bennett was speaking at a Bayit Yehudi faction meeting in Ma’aleh Adumim alongside the settlement’s mayor Benny Kashriel and said he expected all members of the government to support the law.“After 50 years of being here the time has come to end military rule,” Bennett said. “Therefore by the end of the month... we will bring to the government a bill for the imposition of Israeli law in Ma’aleh Adumim together with all the coalition parties.”“Citizens of Israel have paid in no end of victims, tens of thousands of missiles and no end of denunciations for this messianic policy of a Palestinian state,” he said. “The conclusion is to stop marching toward the foolish path of a Palestinian state and to impose Israeli law on Ma’aleh Adumim, the Jordan Valley, Ofra, Ariel and all of Area C as soon as possible. This is how we win.”The Bayit Yehudi leader said that there was “a small window of opportunity” to begin annexing Area C, in reference to what is expected to be the favorable policy of President-elect Donald Trump toward Israel.Bennett stated that all coalition parties back the Ma’aleh Adumim annexation law, but also called on “all members of the government” to support it as well.“There is no such thing as a nationalist government without this law,” he said. “This is the last opportunity before the international community imposes a terrorist state abutting Route 6. It’s either sovereignty or Palestine – there’s no other option.”The bill has been cosigned by two MKs from all the coalition parties apart from United Torah Judaism.Sources within the haredi (ultra-Orthodox) party said no decision has yet been made on whether or not to support the legislation. The two Likud MKs who have signed the bill are coalition chairman David Bitan and Yoav Kisch, head of the Land of Israel Knesset Caucus.One notable dissenter from efforts to annex Ma’aleh Adumim and other parts of Area C is regional cooperation minister Tzachi Hanegbi (Likud).Speaking to The Jerusalem Post on Monday, Hanegbi said Ma’aleh Adumim was “an inseparable part of Israel” and that he was not in principle opposed to annexing Ma’aleh Adumim and other parts of Area C.He said however, that the current timing is wrong and that annexation measures now would harm Israel’s interests.“Today we have the chance to make strategic agreements and understandings with the incoming Trump administration which could be very beneficial to us,” Hanegbi said. “Unilateral annexation would show blatant defiance toward the new president,” he said, adding that the opportunity to come to “strategic understandings with the US on the Palestinian issue” could be lost.If the coalition decides to support the bill, Hanegbi said he would adhere to coalition discipline and vote in favor of it.Speaking more broadly, the minister said he believed that Prime Minister Benjamin Netanyahu still supports a two-state solution in principle, adding that he “support[s] the prime minister’s strategy” on the issue.