China steps to the plate and offers a Chinese vision to peace between Israelis and Palestinians. 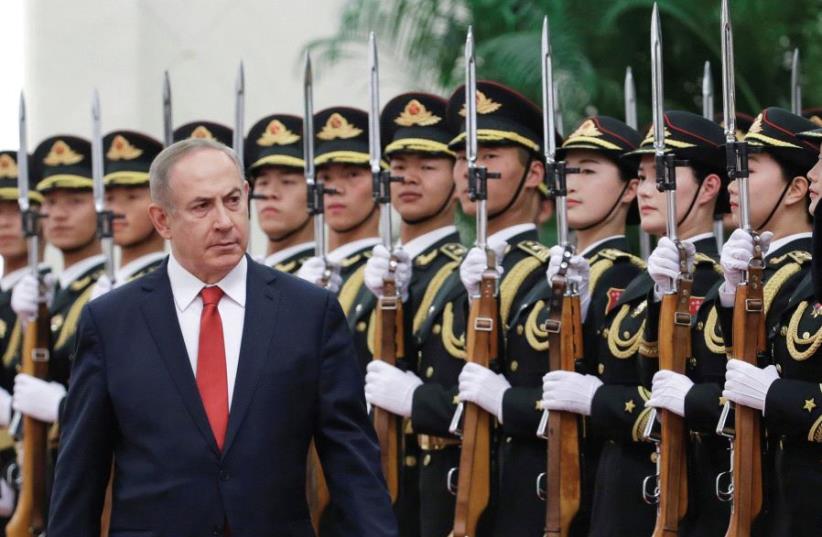 PRIME MINISTER Benjamin Netanyahu inspects an honor guard in Beijing
(photo credit: REUTERS)
Advertisement
China’s expressed interest in getting more actively involved in trying to solve the Israeli-Palestinian issue stems from a concern that any explosion in the Middle East could jeopardize its oil and gas supply from the region, Israel’s former ambassador to China Matan Vilna’i said on Tuesday.Vilna’i’s comments came a day after China’s UN Ambassador Liu Jieyi said at a press conference in New York that the international community should get behind a new four-point peace proposal put forward by Chinese President Xi Jinping.Vilna’i pointed out that “60% of Chinese energy comes from Saudi Arabia, the United Arab Emirates and Iran, and they are very sensitive to what is happening here.”The Chinese sensitivity to the region is further enhanced by the country’s mega infrastructure plan, called the One Belt One Road initiative, that runs through parts of the Middle East and which China hopes will revive the ancient Silk Road.The four-point Middle East peace proposal, as outlined by Liu, calls for a two-state solution based on the 1967 lines, with east Jerusalem as the capital of a future Palestinian state.The second point calls for upholding “the concept of common, comprehensive, cooperative and sustainable security.”Explaining this, Liu said China calls for the “earnest implementation of UN Security Council Resolution 2334” – the anti-settlement resolution adopted in the waning days of US president Barack Obama’s term – and for an immediate stop to all settlement activities.He said China also calls for “immediate measures to prevent violence against civilians,” as well as for an “early resumption of peace talks.”The third point in the plan is a call for the international community to “put forward peace-promoting measures.”One such measure is China’s plan to convene by the end of the year a seminar of Israeli and Palestinian “peace activists” to discuss possible ideas to settle the conflict. This, according to Israeli sources, is meant to be more of a Track II academic gathering, rather than a full-blown peace conference.And the fourth point in the proposal, Liu said, is to “take an integrated approach and promote peace through development.” The Chinese ambassador said that “while promoting political negotiations, attention should be given toward development and cooperation between Palestine and Israel.”Beijing, he said, views both Israel and Palestine “as important partners in its Belt and Road initiative. China stands ready to carry out mutually beneficial cooperation in the spirit of development for peace.”The ambassador said China has proposed launching a “China, Palestinian, Israeli tripartite dialogue mechanism in order to coordinate the implementation of major assistance programs in Palestine.”The Foreign Ministry responded to the proposals on Tuesday by saying that “the way to peace goes through a return to negotiations without preconditions by the Palestinians.”But Vilna’i, Israel’s ambassador to China from 2012 to 2016, said that Israel should welcome any actor who believes they can break the Israeli-Palestinian logjam, though he acknowledged that there was nothing new in the proposals.He said that anything that might be able to build greater trust between Israel and the Palestinians should be seen as positive.Galia Lavi, a research assistant and the coordinator of the China-Israel program at the Institute for National Security Studies, said the most interesting aspect of the proposal is the trilateral mechanism to deal with Chinese investments and projects in the region.She said, for instance, that a Chinese plan to build a solar field in Gaza has gone nowhere because Israel has not granted its approval, and that this new mechanism could move projects such as those forward.She said the Chinese have no real interest in getting actively involved in the peace negotiations or mediating between Israel and the Palestinians, and that they know that a peace agreement will not be signed tomorrow.But the proposal, she said, does show signs of Chinese movement on the economic, rather than diplomatic, part of the Israeli-Palestinian issue, and is something that fits in well with the One Belt One Road initiative.Asked if the Chinese might link development of bilateral ties with Israel to movement on the diplomatic track with the Palestinians, as the European Union has done, Lavi said that the economic relationship between the two countries is “very important to China,” and that Beijing will not let that be affected by diplomatic issues.But, she said, the question is whether Israel may need to worry that sometime down the road China might try to leverage its economic influence in the country into diplomatic influence as well.“Israel has to think how it can make sure that its economic ties with China don’t give them leverage over our policy makers,” she said. “It must think about what assets we can sell, and how much investment to accept here. When China has too much leverage because of money, it might want to use it – I’m not sure that it will – but Israel has to prepare for that and make sure that the cards are still in our hands.” •