"We are in an emergency situation...There is an intifada of incitement," says Yisrael Katz. 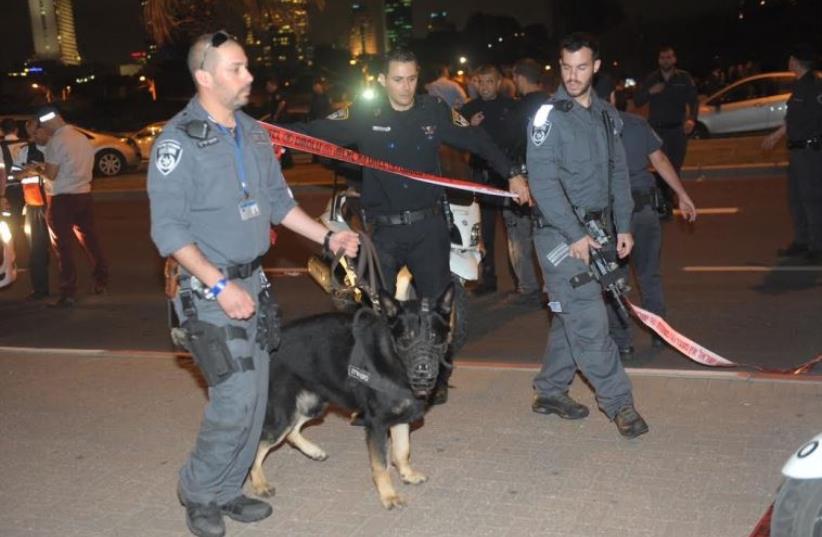 Scene of stabbing spree in Jaffa that left one dead and at least 10 others wounded in Jaffa, March 8, 2016
(photo credit: AVSHALOM SHOSHANI)
Advertisement
Intelligence Minister Yisrael Katz, who is a member of the security cabinet, on Tuesday night labeled the current wave of violence a "war." "We are in the midst of a war against ISIS-style Muslim extremist terror," Katz told Channel 2. "We are in an emergency situation. There are murderers here who are motivated by hatred and we cannot allow Jews to continue to get harmed. There is an intifada of incitement. We must restore deterrence, so I must ask all the higher than thou who scold us to understand our current reality."The Likud minister said he would file his bill calling for the expulsion of terrorists' family members Wednesday.An American citizen was killed and at least 13 other people were wounded in a string of three separate terror attacks that rocked Israel on Tuesday. The American and 10 others fell victims to a Palestinian terrorist who went on a stabbing rampage in Jaffa and southern Tel Aviv on Tuesday evening. Mere hours earlier, two Border Police officers were wounded by an Arab gunman in near Damascus Gate in Jerusalem's Old City. Shortly beforehand, one Israeli was moderately wounded in a suspected terror stabbing in Petah Tikva.All three attackers were killed. In the face of the string of terror attacks, Interior Minister Arye Deri urged Israeli citizens to stand defiant.While visiting a hospitalized victim from the Petah Tikva stabbing, Deri praised the wounded man for acting heroically during the attack."We must go on with our lives," he said from Rabin Medical Center-Beilinson Campus in Petah Tikva. "I trust in the police, the IDF and the Shin Bet (Israel Security Agency) and in the meantime we must all cope with this, and I have no doubt that we will succeed as we have in the past days of terror attacks."In light of the attacks, Zionist Union MK Tzipi Livni implored the state to "think outside of the box in order to bypass the impasse" in combating the current wave of violence."It must be understood that if we continue in the same manner, the wave of terrorism will not disappear and the conflict will continue to sweep into Israel," said the former justice minister.Livni noted visiting US Vice President Joe Biden's arrival on Tuesday, saying his trip could serve as an opportunity to "lower the flames" of tensions between Israel and the Palestinians. A Channel 1 poll revealed Tuesday night found that 73 percent of Israelis are unsatisfied with Prime Minister Benjamin Netanyahu's handling of the security situation, 23% are satisfied, and the rest did not answer or said they did not know.  Meanwhile, Hamas welcomed the attacks, saying they proved that the current wave of Palestinian violence has not desisted and that attempts to thwart it have not succeeded.