Victim evacuated to hospital in moderate to serious condition. 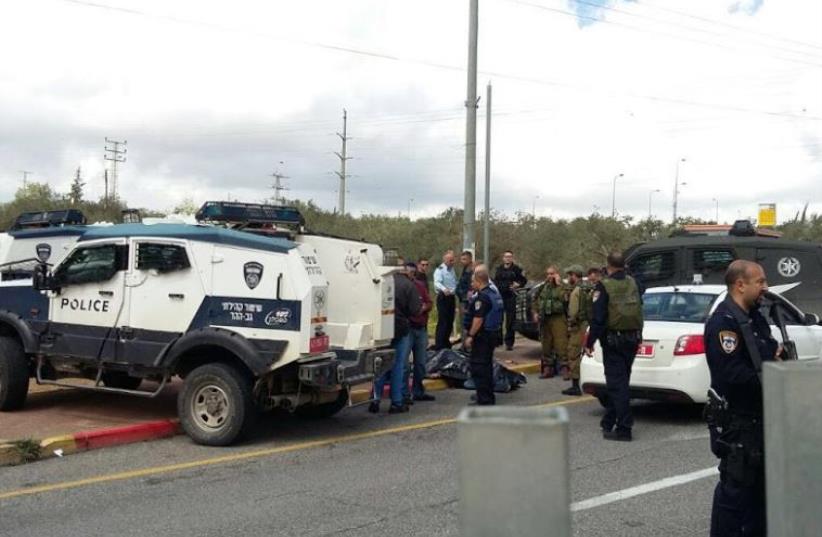 Scene of stabbing attack in Ariel
(photo credit: IFAT ARIELI)
Advertisement
A soldier was stabbed on Thursday morning just as she walked off a bus that had stopped by the Ariel junction in Samaria.Two young Palestinian assailants had run toward her from the direction of the nearby gas station with knives in their hands, according to a spokeswoman for the Samaria Regional Council.Soldiers guarding the bus stop shot and killed the two terrorists: Ali al-Kar Thawabta, 20, and Ali Taqatke, 19, from Beit Fajar village near Bethlehem.Thawabta had two family members who committed terrorist attacks. One, Jihad Tawathbe, is currently imprisoned, and the other one, Isam Tahwatbe, was killed after carrying out a stabbing attack in Gush Etzion in November 2015.MDA paramedics treated the wounded soldier at the scene and evacuated her to Rabin Medical Center – Beilinson Campus in Petah Tikva in moderate to serious condition.She was recovering from emergency surgery.The city of Ariel, with a population of 18,400, is the third largest settlement in the West Bank. Ariel Mayor Ariel Shaviro called on the government “to put an end to the absurd situation in which Israeli citizens are no longer safe.”Maayan Groisman contributed to this report.