“The hostility must end, and we want people to live in peace with everyone, whether [Mizrahi] or Ashkenazi,” Abbas remarks, adding, “We will one day visit the houses of leaders in Israel." 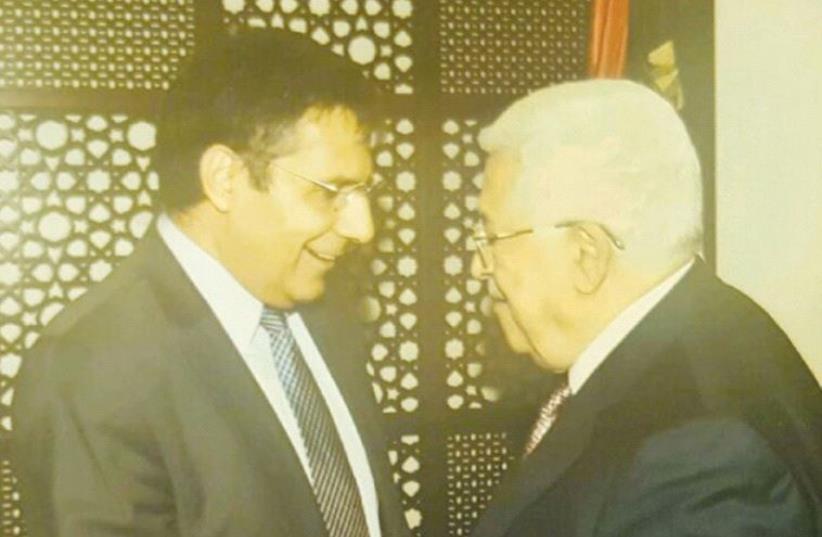 ZIONIST UNION MK Yossi Yonah (left) and PA President Mahmoud Abbas shake hands at the Mukata presidential compound in Ramallah
(photo credit: Courtesy)
It’s dusk on Tuesday evening and a delegation of some 50 Israeli Jews of Iraqi descent are making a short but unordinary trip on a white coach bus to Ramallah to visit Palestinian Authority President Mahmoud Abbas.As the bus crosses the northern Beit El checkpoint, approaching the de facto Palestinian capital, PA police cars and motorcycles turn their sirens on and escort the delegation, whose members hail mainly from Or Yehuda, a city near Tel Aviv, to the Mukata, the PA presidential compound.On the bus ride over, Tamar Tzaliach, a retired businesswoman from Jerusalem who loves Prime Minister Benjamin Netanyahu, says she is not sure if Abbas is ready to make the compromises necessary for peace.“I am skeptical; it is possible that he wants to make peace, but he needs to overcome the pressures around him and take a courageous step,” says Tzaliach, whose family comes from Baghdad and Basra.Zehava Bracha, who operates a website dedicated to preserving Iraqi Arabic among Israeli Jews, says she has not come to make a political statement.“I am not political, but I believe in peace between both peoples, and that starts with a conversation,” Bracha remarks. “I came to start that conversation.”As the visitors descend the bus in the Mukata’s parking lot, the PA presidential guard forces welcome and direct them to a medium-sized room, where a number of Abbas’s top advisers are awaiting their arrival.Among the advisers is Muhammad Madani, the chairman of the Palestinian Committee for Interaction with Israeli Society, a Palestinian government body.Since early 2013, Madani has frequently traveled around Israel, meeting with Israelis from all walks of life, but Defense Minister Avigdor Liberman withdrew Madani’s VIP entry permit in April, making it impossible for Madani to meet Israelis on the other side of the Green Line.Liberman said that Madani had attempted “to establish a political party” and wanted “to undermine Israel’s political stability,” all claims that the latter vehemently denies.Madani, together with Zionist Union MK Yossi Yonah, organized Tuesday’s meeting, which comes at a time when there is little discussion of the peace process between the two sides.Yonah, whose family comes from Nehardea, an ancient Iraqi city, says he met Abbas approximately two months ago and agreed to help arrange for a delegation of Israeli Jews of Iraqi descent to come to Ramallah.After everyone is seated, Abbas emerges from the doorway and individually shakes each of his guests’ hands.One guest on the far side of the room recites a verse of the Koran that mentions both Jacob and Ishmael, and Abbas yells in jubilation, “God is great.”Yonah then takes the floor and delivers remarks in Arabic, while Taleb al-Sana, a former Arab-Israeli member of Knesset, translates into Hebrew.“Our culture has deep roots and is part and parcel of the region. We also believe that it is still possible to achieve a peace agreement that serves both of our interests,” Yonah says, adding that he “calls on Abbas and Netanyahu to renew talks without preconditions.”Following Yonah’s comments, Abbas says that he welcomes his guests as “brothers and sisters,” not cousins as some refer to the relationship between Jews and Arabs.“When I greet you, I don’t feel that I’m talking to visitors, rather to my family. Perhaps what brings us together is the civilization, culture and language that we share,” Abbas says, in an apparent reference to their shared Arab background.Abbas, too, says that he thinks peace is still possible.“The hostility must end, and we want people to live in peace with everyone, whether [Mizrahi] or Ashkenazi,” Abbas remarks, adding, “We will one day visit the houses of leaders in Israel.”Moreover, Abbas states that he wants to reconvene a tripartite anti-incitement committee: “We have to end incitement on both sides and change the mentality,” Abbas says, warning that “incitement can lead violence.”The meeting then transitions from politics to a culture exchange. Yaakov Karkukly, one of the guests, who studied Shari’a (Islamic law) in Baghdad, recites prophetic sayings of the Prophet Muhammad. Sabri Ashour, another guest, plays traditional Arabic music, singing songs as everyone claps in unison.Abbas likes the songs so much that he motions to Ashour to play an extra song.Following the meeting, Abbas foots the bill for an especially prepared traditional Arabic meal at a local Ramallah restaurant, as security forces stand on guard outside.There, Sana tells the delegation that he hopes their visit was beneficial. “We hope that you will now share your experience with everyone you know,” the former MK said, adding, “We can’t just talk about peace, we have to work for it.” Madani makes a brief statement as well: “We want to transform the situation of extremism and settlements into peace.  We all have the power to end this bitter reality and the killing. We can do this together.” On the way home, after PA police cars escort the bus to the Beit El checkpoint, Tzaliach, who expressed skepticism about Abbas before meeting him, says she has had a total change of heart.“I did not expect to meet such a great man with a big heart; I was totally surprised. I believe that he genuinely wants peace,” Tzaliach says.Tzemach Yakar, a retired journalist and actor, says he is less optimistic.“The meeting is a nice thing, but I don’t think it will change the political situation,” Yakar says. “The only way to peace is real, bold decisions to make compromises and concessions.“We need him [Abbas] to make moves like Sadat.”