Israelis and Palestinians back conflicting narratives in alleged Duma firebombing

Initial police investigations reportedly indicate that the incident was not nationalistically motivated; no injuries. 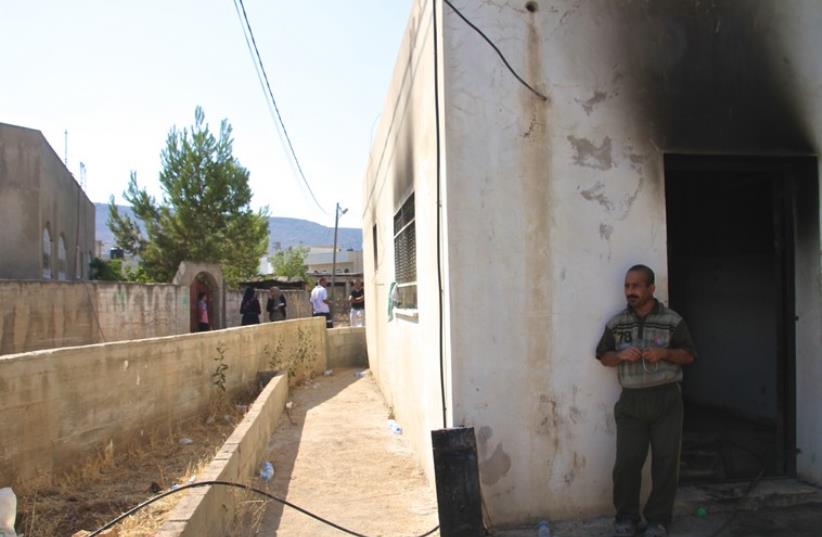 The Dawabsha family home in Duma, July 2015
(photo credit: TOVAH LAZAROFF)
Advertisement
A fire broke out overnight after Molotov cocktails were allegedly thrown at the home of a Palestinian family in Duma, next door to a home that Jewish extremists targeted last year, Wafa, the official Palestinian Authority’s news agency, reported Wednesday.Shortly after the fire erupted in the village 25 km. southeast of Nablus, PA Civil Defense units rushed to the scene and got it under control. No injuries were reported.An Israel Police representative told The Jerusalem Post that an initial investigation indicated that the incident did not appear to be a nationalistically motivated, but rather the result of a local village conflict. The representative later added that a deeper investigation confirmed the results of the initial investigation.However, Muhammad Dawabsha, the homeowner, accused Jewish extremists of throwing firebombs through a window onto the second floor of his home, causing a fire.He said he heard strange sounds near his house at 3 a.m., and moments later burning objects were tossed into his home.Ghassan Daghlas, a PA official in charge of monitoring settlement activity in the northern West Bank, also accused Jewish extremists of carrying out the firebombing.“Settlers are the primary suspects in this incident, especially considering the objects used are highly flammable” and “are not available in the Palestinian market,” he said.PA government spokesman Yousef Mahmoud also said extremist Jews were responsible for the firebombing.“Evidence points to terrorist settlers having carried out the crime,” he said.On July 31, 2015, two homes were torched in Duma – one, a one-story house, in which its inhabitants Ali, Saad and Riham Dawabsha were killed, and the other, a two-story home, belonging to cousins with the same last name that was empty at the time.