President Rivlin: I do not object to Israeli negotiations with Hamas

Israel and world must cooperate in effort to rehabilitate Gaza, president says. 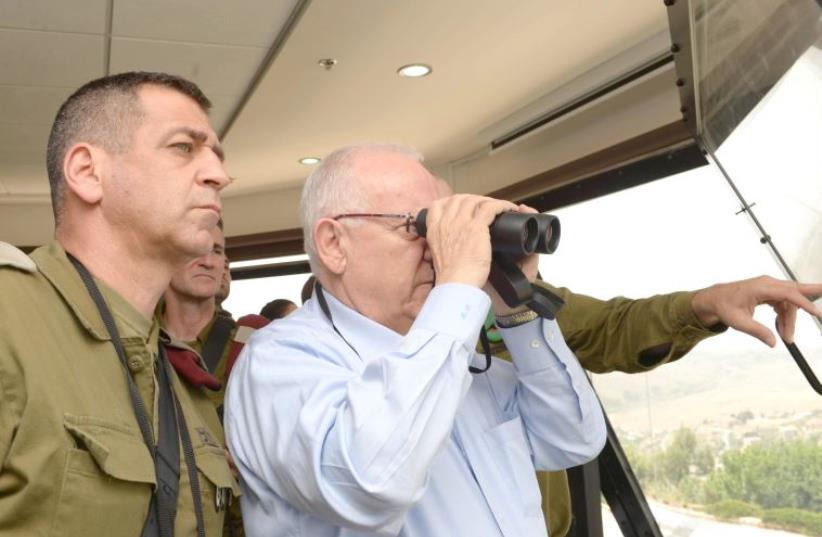 President Reuven Rivlin and OC Northern Command Maj.-Gen. Aviv Kochavi on tour of northern border
(photo credit: Mark Neiman/GPO)
Advertisement
A day after a rocket was fired from Gaza on Israel, President Reuven Rivlin said on Wednesday that he does not object to Israel negotiating with Hamas. He said that Israel and the Palestinians have a joint interest in rehabilitating the coastal territory for the benefit of its residents.  "I do not recoil at the idea of negotiating with any willing party," Rivlin said in comments he made while on a military tour of the northern border.Rivlin related to reports that the Islamic Jihad organization carried out Tuesday's attack on Gan Yavne. "Hamas is very worried from the organization that challenged its authority," Rivlin said.
After firing rockets at Israel, explosions in Gaza from IDF strike
Hamas wants to maintain order in Gaza, not for Israel's benefit, he added.   Rivlin echoed Defense Minister Moshe Ya'alon's earlier sentiment that all attacks originating in Gaza towards citizens in the South would be met with a severe Israeli response.   "It is very bad to act with aggression against the State of Israel," he said. The president also spoke about about the stalled international effort to rehabilitate the Gaza  Strip following last summer's war.  "We and the world are not succeeding in Gaza's rehabilitation. There must be an international effort with Israeli oversight in order to end the hostility directed at us." he said.  Following the rocket fire on Israel, the IAF responded early Wednesday morning by attacking four targets in southern Gaza.  In response to the Israeli retaliation, Ismail Haniyeh, Hamas’ deputy political bureau chief in Gaza, said Wednesday that, "Israel's theory of deterrence does not affect Gaza. Gaza, however, can deter Israel, as was shown when one million Israelis panicked and took to shelters over one stray rocket."