Many citizens blame Hamas for the suicide wave, claiming that the movement is disconnected from the reality in Gaza. 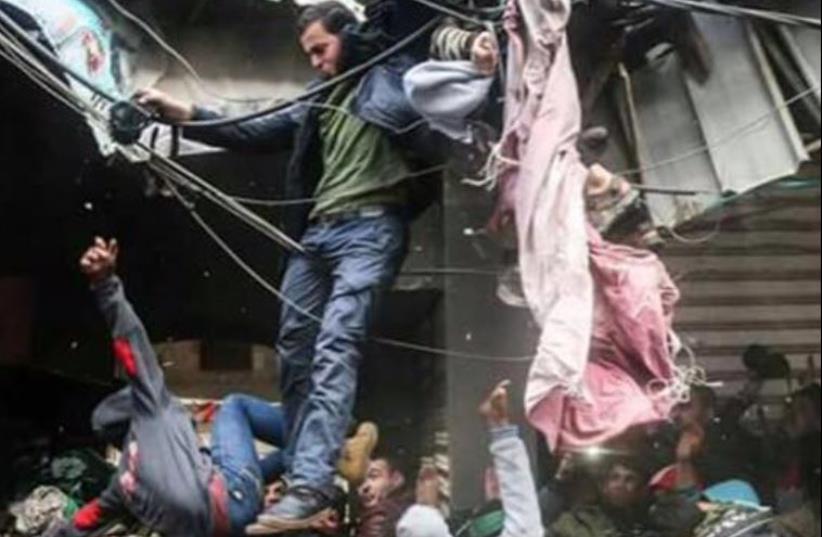 Palestinians in Gaza during a roof collapse
(photo credit: Courtesy)
A rash of suicides has hit the Gaza Strip in February, with six people reportedly taking their lives since the beginning of the month, a significant rise compared to suicide rates last year.The wave is not characterized by a certain age group or gender committing suicide, as it has included both men and women, teenagers and adults. The most common suicide methods among Gazans are hanging and jumping from tall buildings, while one person from the southern town of Khan Yunis, which has witnessed four suicides this month, set himself on fire. Before igniting himself, the 32-year-old man, Azmi Yunis Barim, wrote on his Facebook page: "I have lived all my life and now I want to put an end to my life and reach my safe haven." Palestinian psychologists explain that the phenomenon derives from the growing distress Gazans suffer in light of the siege, the electricity shortage and growing unemployment rates. Since they have faced this gloomy reality for ten years now, Gazans see only two solutions for their distress: either to leave Gaza searching for employment opportunities abroad or, forced to stay in Gaza since the Rafah border crossing with Egypt is closed, many of them lose hope for a better future and consider suicide as their refuge.Many of the victims in the recent suicide wave were parents, who believed they could no longer provide their children with their basic needs. There are also many failed suicide attempts: according to Palestinian media there are more than 30 suicide attempts per month.The Euro-Mediterranean Human Rights Monitor found that about 55% of Gazans suffer from mental diseases, while more than half of the children in Gaza need mental support.Many citizens accuse Hamas of the suicide wave, claiming that the movement is disconnected from the reality in Gaza. Gazans' frustration with Hamas increased this week, after the movement's leadership decided to buy 36 new cars for senior public servants.