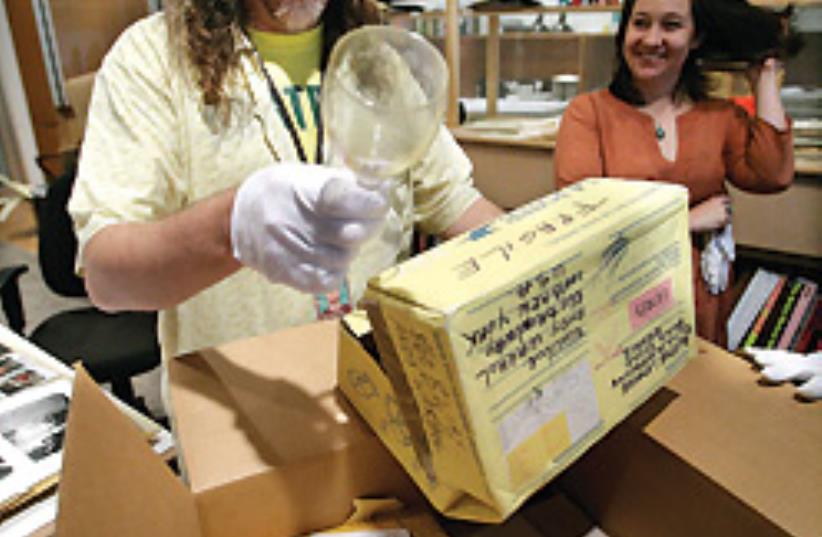 Matt Wrbican (left) discovers a wine glass while opening a time capsule dated June '86. Cataloguer Liz Scott (right) found orange nutbread in a different collection.
(photo credit: AP)
A cardboard lid is lifted and four archivists peer inside. A postal box from Paris. Who sent it? A piece of crusty wedding cake. Whose? Another box: $17,000 in cash. Yet another: An autographed picture of a naked Jacqueline Kennedy Onassis.

Matt Wrbican (left) discovers...
Matt Wrbican (left) discovers a wine glass while opening a time capsule dated June '86. Cataloguer Liz Scott (right) found orange nutbread in a different collection.
Photo: AP
These are some of the many items workers have uncovered as they sift through 610 cardboard boxes, filing cabinets and even a shipping container filled with what would be considered junk by most people but has a whole different meaning since it was collected by pop artist Andy Warhol.
The archivists, hired with $600,000 from the Andy Warhol Foundation and several other smaller grants, have six years to comb through everything from taxi cab receipts to fan mail, meticulously cataloguing, photographing and, when possible, researching the often bizarre items before entering them into a database.
"He really didn't like organization and there would be several boxes going at a time," says Matt Wrbican, who is overseeing the cumbersome project.
Now the spouses of 19 heads of state and representatives of the European Union coming to Pittsburgh in September for the Group of 20 global economic summit may also get a peek at the papers, stamps, photos, gifts and nicknacks that made up Warhol's life.
"I would like to give them a Warhol experience," says Thomas Sokolowski, director of The Andy Warhol Museum, who will host the spouses for lunch during the September 24-25 summit.
The idea, he says, is to give them white smocks and gloves, just as the archivists wear, and a box to sift through.
The White House hasn't decided whether to go for it, he says, and if it does, any boxes would be vetted in advance to ensure nothing crops up that is offensive - such as porn - or truly disgusting - like the oozing, decades-old soup cans Warhol often dumped inside.
Warhol was never one to throw things away, Wrbican says. In fact, when he died in 1987 at 58, his four-story Manhattan townhouse was packed with stuff: shopping bags filled with antiques, clothes, books and other artifacts from his daily expeditions, boxes, piles of furniture and even a drawer of gems worth $1 million.
"The only rooms that looked like a normal house were the bathroom and the kitchen," says Wrbican, who has been going through the artist's things since 1991.
However, there was no rhyme or reason to the collecting until about 1973. That's when a Warhol associate suggested the artist carry a box around to dump things inside. Each "time capsule" was filled, taped shut, dated and sent to a New Jersey storage facility.
In the 18 months since the project began, the archivists have opened 177 boxes - each with an average of 400 items, some with as many as 1,200. Today, Wrbican said, just one of the boxes is insured for the amount of money the time capsule collection was appraised at a few years after Warhol's death.
In September, the archivists will begin blogging about the "Object of the Week." What could appear: Wrbican's favorite, a mummified human foot belonging to an ancient Egyptian; a Ramones' 45 record signed by the punk rock band's lead singer Joey Ramone, found by cataloger Marie Elia; or the orange nutbread cataloger Liz Scott discovered - sent to Warhol by one of his Pittsburgh-area cousins with a note telling him to enjoy it with a cup of coffee.
"So he just threw it in a box," Scott laughs, twisting her face to describe the tangy smell that wafted out of the box.
So, you're wondering, whose wedding cake was it? Caroline Kennedy's - married in 1986 to Edwin Schlossberg. And where is it? The trash.
And how did Warhol come to possess a naked poster of Jackie O signed, "For Andy, with enduring affection, Jackie Montauk"? As it happens, says Wrbican - who along with other researchers authenticated the signature through handwriting comparisons - Onassis was a frequent visitor to Warhol's Montauk, NY, beachfront estate.
So, after her second husband, Aristotle Socrates Onassis, got a paparazzo to take pictures of her skinny-dipping and it landed in the hands of Larry Flynt, who turned it into a poster for his porn magazine, Hustler, Jackie O sent a copy - likely as a joke - to Warhol, Wrbican said.
"I really doubted it was her signature at first," he says. "But it really matches her writing."
Subscribe for our daily newsletter