Prime Minister Netanyahu: We will beat the odds by strengthening science 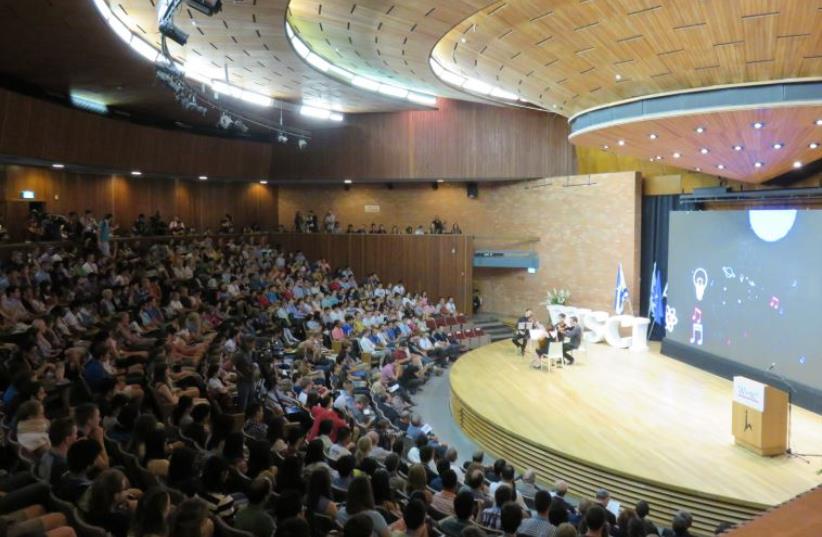 Students in Hebrew University's Wise Auditorium
(photo credit: JUDY SIEGEL-ITZKOVICH)
Advertisement
Some 400 talented young science students from 70 countries lauded Israeli and its achievements on Sunday.The students came everywhere from Ecuador to China, including some from Muslim countries, and were hosted by the Foreign Ministry. The students were enthralled by Hebrew University of Jerusalem’s Givat Ram campus and by 15 Nobel Prize and Wolf Prize laureates from both Israel and abroad who explained how they had become scientists and what they had discovered. The conference organizers hope that the participants will act as “scientific ambassadors of goodwill” for Israel when they return home.Among the initiators of the World Science Conference Israel (WSCI) was Prof.Roger Kornberg, the Stanford University biochemist and expert in structural biology who received the Nobel Prize in Chemistry in 2006 for his studies of the process by which genetic information from DNA is copied to RNA.He is a frequent visitor to Israel with his closest collaborator and Israeli-born wife, Prof.Yahli Lorch, a Hebrew University graduate, Stanford geneticist and daughter of the late historian and Knesset clerk Netanel Lorch.Prime Minister Benjamin Netanyahu met the Nobel Prize winners later in the day, and said the Jewish penchant for inquiry, for inquisitive minds, has been its key to survival, and is also its key to the future. The only way a small people like the Jews and a small state like Israel can “keep on beating the odds” is to “make our capabilities – scientific, economic, culture – more powerful, more successful.”This is something Israel is currently doing in the field of cyber-security, which Netanyahu said will be a “growth engine for at least 50 years.”“I mention cyber because it’s an example of leveraging culture, leveraging science, into technology, into economic power which also gives you political power, alliances,” Netanyahu said.“No nation can live without alliances. Superpowers need alliances. Well, a small country like Israel needs alliances.”“No one makes peace with the weak,” Netanyahu said. “No one. And so we have to be powerful for peace and for our future and for the prosperity of our people and for modernity to beat medievalism.I view the core of that power, the engine that is represented in this room right now, that’s the core of our power: the power of the mind. That’s what we need and that’s what you represent and that’s what we admire.”The event, which is taking place at the campus’s Wise Auditorium, continues until Thursday. Most of the participants are making their first visit to Israel and are not Jewish. The young scientists gave the laureates standing ovations after each spoke.Several dozen foreign journalists and TV crews accompanied the groups of young scientists although the event attracted comparatively little coverage in the national media. TV interviewer and food and science buff Gil Hovav served as MC on the opening day.Science, Technology and Space Minister Danny Danon, who just been named ambassador to the US by Prime Minister Benjamin Netanyahu, said the government was committed to increasing the representation of women among local scientists and to giving the universities “a lot more money to hire more women” on their academic staffs.Foreign Ministry director- general Dore Gold told the packed auditorium that Israeli scientists have always had to emphasize the quality of their research to compete with the quantity of research carried out abroad.“Aside from Iran and ISIS [Islamic State], some nations in this region are drawing together. I don’t know how this will come about, but Israelis with scientific backgrounds are making contributions to their Arab neighbors,” said Peri. “I won’t go into details. If we can draw together because of the mutual threat and build on it, we may be able to create new reality. Science will emerge as a key component for building peace in a new Middle East, and it may not be far away,” he said.The audience was entranced by the modesty of the three Israeli Nobel laureates as they described their humble family backgrounds and their individual realizations that they were “on to something” despite often facing skepticism from colleagues.Those three Israeli laureates were Prof. Ada Yonath, a Weizmann Institute crystallographer (joint 2009 Chemistry Nobel laureate); Prof. Robert (Yisrael) Aumann (mathematician who conducted work on game theory and was the 2005 Economics laureate); and Prof. Aaron Ciechanover, a physician and biologist who shared the 2004 Nobel in Chemistry for work on ubiquitin-mediated protein degradation with his Technion mentor Prof. Avram Hershko and US colleague Prof. Irwin Rose.

A Jerusalem Post science page feature on the WSCI will be published Sunday, August 30.
Advertisement
Subscribe for our daily newsletter