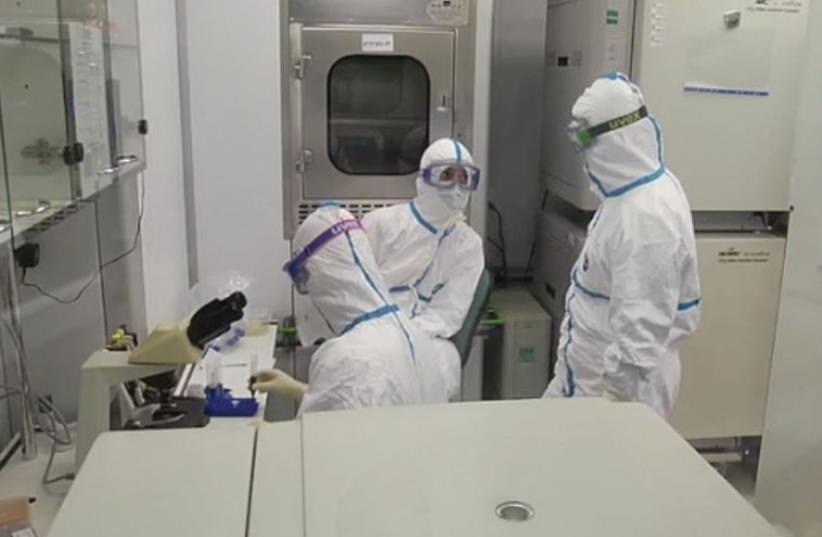 Dr. Ibrahim Kassis and his team, lab technicians work on refinement of stem cells, an intrathecal injection is performed
(photo credit: HADASSAH UNIVERSITY MEDICAL CENTER)
Advertisement
Native-born Israelis are at higher risk than immigrants of contracting the blood cancer known as Hodgkin’s lymphoma, apparently due to lifestyle and environment differences experienced from a young age. Israeli women have the highest rate of the disease in the world, while their male counterparts have the second highest.The findings were published by Dr. Hagai Levine of Hebrew University’s Hadassah School of Public Health on Friday in the journal, Leukemia and Lymphoma.The study, which assessed the possible impact of immigration status and origin on the development of the blood cancer in Israelis, was conducted in collaboration with professor Jeremy Kark and Dr. Merav Leiba from Sheba Medical Center and included data from the Global Cancer Observatory From 1960 through 2005, a sharp rise was seen in the incidence of lymphoma among Israeli-born Jews of both sexes, with similar rates in the Jewish and non-Jewish populations.Hodgkin’s lymphoma is a common malignancy in early adulthood, accounting for approximately 30% of all cancers of the lymph system, or lymphomas. In reviewing the records of 2.3 million Jewish adolescent males and females for up to 45 years, birth in Israel was associated with a much higher risk of Hodgkin’s lymphoma, particularly of the nodular sclerotic type.Higher risks were found among native-born subjects compared to European, Asian and North African immigrants.Higher risks were also found for women, younger or taller people and those with higher body-mass index (BMI).The findings suggest exposure to some unidentified elements in the local environment increase the risk of nodular sclerosis lymphoma. They also indicate possible causes of Hodgkin’s lymphoma that are rapidly acquired. These may occur when changed lifestyles interact with susceptible genes, for example, by some unknown exposure during preconception, pregnancy or in early life. These suggested conclusions should aid in directing research efforts, according to the study.Despite evidence for environmental causes, very few risk factors have been positively identified. Studies of immigrant populations help investigators compare the relative importance of genetics versus environment in the development of disease.As a society with a widely varied, multi-ethnic immigrant population for which extensive population data are available, Israel provides a unique setting for large-scale, population-based studies over several decades.Records of Jewish subjects aged 16 to 19 with no history of a cancer diagnosis at the time of exam were studied.Nationwide data collected from 1967 to 2011 on 2,285,009 adolescents were linked to Israel’s Cancer Registry to obtain the incidence of Hodgkin’s lymphoma until 2012.In the equivalent of 47 million years of records studied, 2,093 Hodgkin’s lymphoma cases were detected. Among the 2.3 million men and women whose histories were reviewed, an association was found between being born in Israel and subsequent occurrence of the disease. This association was independent of paternal country of origin, year of birth, gender, socio-demographic characteristics, BMI and height.Surprisingly, it took only one generation for elevated risk to appear. So, for example, the low incidence of Hodgkin’s lymphoma for immigrants from Western Asia no longer held for Israeli-born individuals of Asian origin.Among immigrants, there was no difference in disease rates when measured by age at migration.This suggests that immigration from a low-risk to a high-risk location – especially to a locale with a modern lifestyle and environment – is associated with an increase in rates of Hodgkin’s lymphoma.The increase was seen within short periods of time, making genetic drift an unlikely explanation.However, the Israeli lifestyle and environment, whether independently or through gene-environment interaction, may pose exceptional risks for Hodgkin’s lymphoma.This was suggested by a high and increasing incidence in Israel, even among Israeli- born subjects of European origin compared to European- born immigrants.“While we still need further studies to identify the specific causes of the high rates of Hodgkin’s lymphoma among native Israelis,” said Levine, “our findings direct us to search for possible environmental causes in Israel and the neighboring countries.These causes could be not only environmental exposures, but also diet, climate, social environment and stress that may be related to chronic regional conflict.”There is increasing evidence for developmental origins of health and disease, with different possible mechanisms, including epigenetic changes or endocrine disruption, he said. “There is also increasing evidence on the role of prenatal stress in offspring development, including cancer development, especially for hematological malignancies.These data suggest that risk of Hodgkin’s lymphoma (the nodular sclerosis subtype) is possibly increased due to preconception, prenatal or early life exposures to a changing lifestyle and environment and its interaction with susceptibility genes,” he concluded.