Tech Talk: They're gonna put me in the movies

Cydersoft will be launching a new stage of fund raising in the near future. 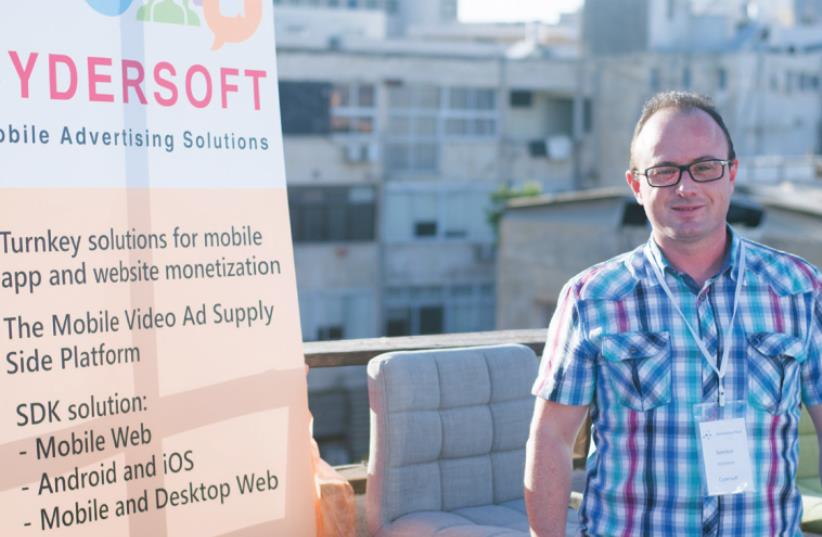 CEO OF CYDERSOFT, Semion Rotshtein: All you need to get started and begin making money is to get users to go into the video’s URL where they’ll see a link
(photo credit: PAUL JACOBSON)
Advertisement
It’s not easy to make money from a video clip uploaded to YouTube or Facebook. It needs to attract at least a million views before it starts generating any serious money. This is usually achieved only after a professional company has been hired for that purpose.Fortunately, the process of monetizing video content – or in other words, making money from traffic surrounding your video – has just gotten easier.Under the leadership of founder and CEO Semion Rotshtein, Cydersoft specializes in developing cutting-edge solutions for the mobile advertising industry.Through its flagship product – VideMob – the company creates over 100 million videos each day. Cydersoft currently employs 20 individuals in four branches around the world and is growing fast.Cydersoft’s most recent development is an app called Alfa Share, which helps people make money from their video by sharing it on social networks.“All you need to get started and begin making money is to get users to go into the video’s URL where they’ll see a link,” Rotshtein said. “The most interesting innovation we’ve created is the ability to spread the video to sites such as YouTube and Vimeo and to enable users to advertise in cloud computing locations, such as a DropBox.”Anyone who clicks on a link will first see a short personalized ad, and the payment will be made according to CPM model of payment per 1,000 views.Cydersoft says that a charge is incurred from the first viewer and grows with each 1,000 views and that most ads end up costing around $2.00.“We built a control panel for our users that generates reports and tracks earnings,” added Rotshtein. “Direct distribution through social media channels is the future content distribution. This already exists today, but no one is able to make any money the way it’s currently being done. All the profits go to the large companies even though most of the content is being created by individuals.We believe that if people can finally profit from their creations, then this will encourage people to create even more quality videos and will convince people to become more involved in where their content is going.”Cydersoft will be launching a new stage of fund raising in the near future.The app is available for both Android and iOS.Car hacking Connected Cars – cars that are connected to the Internet – are expected to be increasingly popular. Estimates show that in the near future, hundreds of millions of cars will be outfitted with this technology built-in to the vehicle, which is intended to make driving easier and more enjoyable. As this technology becomes more common in cars, so too will cyber attacks on cars become more commonplace. In fact, there has already been a “cyber recall” of 1.4 million vehicles.Argus Cyber Security is an Israeli company that has created an innovative Intrusion Prevention System (IPS), a government tested solution that protects vehicles’ critical components from being hacked and generates reports and alerts for remote monitoring. The US Department of Transportation has given its go ahead for these protective devices, which will be installed in cars on brakes, steering and engines. None of these items will require that any changes be made in the design of the car and neither has their addition to production lines led to an increase in manufacturing costs.Automobile manufacturers that use the Argus Cyber Dashboard can receive updates and alerts on cyber threats and can respond in real time to attacks.Argus offers flexible protection solutions that can cope with future cyber threats and protect vehicles for as long as they remain on the road. These solutions are based on Deep Packet Inspection (DPI) and Big Data, which are patent-protected.Argus, which recently completed a second round of financing of $26 million, supplies OEM car manufacturers and their largest Tier 1 suppliers, with its state of the art technology. Argus was founded in 2013 by graduates of the famous IDF Unit 8200 and has a development center in Tel Aviv, with additional offices in Silicon Valley, Michigan, Stuttgart and Tokyo.

C Nature C Nature, an Israeli app that can help people identify animals and plants, has been chosen to represent Israel at Global EdTech, an international educational technology competition that will take place in November. A graduate of the MindCET incubator, C Nature beat out eight other Israeli startups and will compete against more than 300 startups from around the world, including New York, London, Barcelona, Pune, and Bogota.C Nature, which has the broadest based archive of digital photographs of animals and plants in the market, enables users to identify images based on the wisdom of crowds. The identification of the objects is done through a dynamic interface of questions and answers and a mapping of the various animal and plant species in real time, in conjunction with automatic consultation with app users. The app is expected to launch in Israel in the coming weeks.If you run a young startup, have developed an interesting app or have a question, please feel free to contact info@ social-wisdom.com.