By JPOST.COM STAFF, REUTERS
MARCH 11, 2012 14:32
Rockets fired from Gaza smoke 390
(photo credit: REUTERS)
Advertisement
The Iron Dome missile defense system intercepted a total of eight rockets Sunday morning that were fired from Gaza towards the city of Ashdod and the surrounding areas.The latest rocket launches come amid an escalation in violence along the Gaza border after the IAF foiled a major terror attack, killing the secretary general of the Popular Resistance Committees, Zuhair Qaisi.
Video provided by Avichai VatkinOne Grad-type rocket was intercepted at around 11:00 a.m., two more were intercepted shortly after 10:00 a.m, while a further two rockets were intercepted at around 7:00 a.m.A further two rockets were fired from Gaza and they exploded in southern Israel. One of the rockets exploded south of Ashkelon and the other in the Eshkol Regional Council. Those rockets landed in open territories and caused no casualties or damages. Police said that a total of 14 rockets were fired at southern Israel on Sunday morning, with five being intercepted and six landing in open territories, bringing the total over the weekend to at least 130. No injuries or damage were reported in the Sunday attacks. The IDF continued to target terrorists in the Gaza Strip Sunday morning after Palestinians continued to fire rockets at towns in southern Israel. Medical sources in Gaza reported that the latest IAF strike killed two Palestinians, one a 12-year-old boy. The medics said the boy was killed by an air strike in the northern Gaza Strip, while the other Palestinian was killed in a separate strike in Gaza City.Palestinian medical sources claim that the death toll in the Gaza Strip now stands at 17 people, Ma'an reported. The IDF Spokesperson's Office said that IAF aircraft bombed underground launchers of rockets that have a range of over 40 kilometers.On Saturday overnight, the IDF attacked a group of terrorists preparing to launch a projectile at Israeli territory, killing on 24-year-old male and injuring three others.The IDF Home Front Command along with the heads of a number of local authorities in the South decided on Saturday night to cancel school in all towns and cities located between 7 km. and 40 km. of the Gaza Strip.Due to the decision, approximately 200,000 children will stay home on Sunday. The ban applies to Ashkelon, Ashdod, Beersheba, Netivot, Sderot, Kiryat Malachi, Gedera, Rahat, Yavne, Lakiya and the Gan Yavne Regional Council. 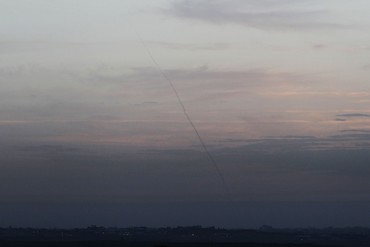 smoke trail from rocket seen near Ashkelon (Reuters)Schools in the western Negev that are within 7 km. of the Gaza Strip will hold class as usual, as they have the necessary reinforcement to protect against rockets, the Home Front Command said.The violence started on Friday afternoon when Israel Air Force craft bombed a car in Gaza, killing Qaisi and another top terrorist in the organization who was recently released in the Gilad Schalit prisoner exchange.The IDF said it decided to bomb Qaisi’s car due to intelligence that he was plotting a large terrorist attack along the border with Egypt, similar to the one the PRC carried out last August that killed eight Israelis. The IDF decided on Friday to close Route 12 – which runs along the border with Egypt – due to fears that the planned attack might still take place.While most of the rockets fired from Gaza were shortrange Kassams, some were long-range Grad-model Katyushas that succeeded in hitting 40 km. from the Gaza Strip. The short-range rockets were mostly fired by the PRC and the long-range rockets by Islamic Jihad. 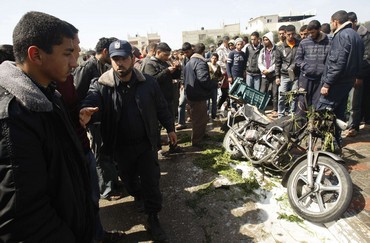 motorcycle hit by IDF in Gaza (Reuters)The flareup in Gaza is the worst since October. The escalating violence drew appeals for a cease-fire from the European Union, the West Bankbased Palestinian Authority and Egypt. IDF sources said that Israel was in constant touch with Egypt.In the Gaza Strip, thousands attended funerals for the dead gunmen on Saturday, listening to speeches calling for revenge. 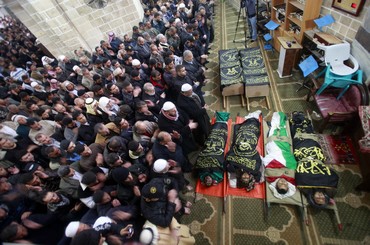 Palestinian worshipers near bodies of dead Islamic Jihad members (Reuters)Gaza officials said Israeli troops opened fire on mourners at a burial for an Islamic Jihad gunman attended by hundreds at a cemetery near the Israeli frontier fence, wounding four. The IDF did not have an immediate comment on the incident.Yaakov Katz, Ben Hartman and Yaakov Lappin contributed to this report.
Advertisement
Subscribe for our daily newsletter