The school director said that it was good there was student opposition to the memorial event because it "is the basis of discussion." 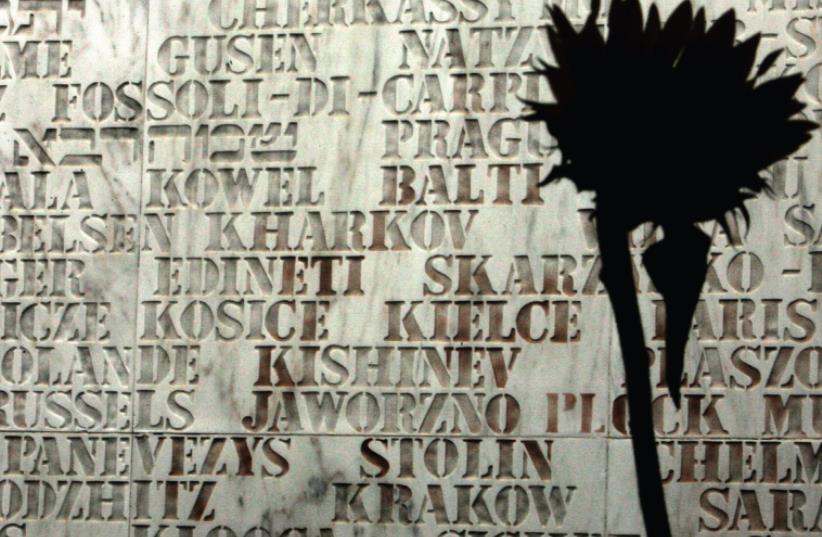 Holacaust rememberance wall
(photo credit: REUTERS)
Advertisement
Muslim students of Arab and Turkish origin protested participation in an International Holocaust Remembrance Day event in Germany, while their high school’s administration showed understanding for their criticism of Israel.“Some Muslims students said they would not participate in the event,” said Florian Beer, a teacher at the school in the city of Gelsenkirchen in North Rhine-Westphalia state, Der Westen newspaper reported on Thursday.The Holocaust remembrance event was part of a global commemoration in which participants take selfie photographs along with a sign saying “I Remember“ or “We Remember.“ A blackboard at the school was defaced with the sentence: “F*** Israel, free Palestine.” The school was not able to identify the perpetrator.Dr. Efraim Zuroff, the head of the Jerusalem office of the Simon Wiesenthal Center, told The Jerusalem Post on Friday, “Muslims students are greatest in need of Holocaust education, so it would be unfortunate if they were excused from those activities.”Zuroff, who is Wiesenthal’s chief Nazi-hunter, added, “Given that Holocaust consciousness is a central idea of civic identity in the Federal Republic, it is doubly important for families that come from countries with deep antisemitic traditions and no knowledge of the Holocaust and the destruction of European Jewry.”The Weiterbildungskolleg Emscher-Lippe school, where the protest unfolded, has 500 students, 40% of whom have a migrant background.School director Günter Jahn told Der Westen it was good that there was student opposition to the remembrance event. “It is important that there is criticism. That is the basis for a discussion.” He added that in certain communities, criticism of Israel is demanded.The school is located in the northern part of the Ruhr region and Gelsenkirchen’s population in 2015 was roughly 260,000.Some of the students allowed themselves to be photographed with the remembrance signs but declined to permit the photographs to be displayed on the Internet. A number of students, according to Der Westen, asked, “Why always the Jews?” The students added there are, after all, other problems in world.Beer said the school likes to be provocative because there are always events at the school that leave an “aftertaste of antisemitism.” He added that representatives from the World Jewish Congress have been invited to come speak at the school.The number of antisemitic attacks reported in Germany doubled from 2015 to 2016, according to a report the Diaspora Affairs Ministry released last Sunday. The actual number of attacks is believed to be higher because of the lack of standards to identify contemporary antisemitism in the Federal Republic.In January, a German court reaffirmed a legal decision from the city of Wuppertal stating the torching of a synagogue by three Muslims was not motivated by antisemitism. The court wrote the men only sought via the arson “to clearly draw attention to the blazing conflict between Israel and Palestinians” during Operation Protective Edge in 2014. The original synagogue in Wuppertal was burned by Germans in 1938.Volker Beck, a German Green Party deputy in the Bundestag, said on Thursday that the memorial day for the victims of National Socialism must not just be about remembering, it must lead to action.Beck, who has led the parliamentary fight to blunt the mushrooming modern Jew-hatred in Germany, said “antisemitism frequently appears clothed as anti-Zionism.” He cited three German academic institutions that stoked anti-Israel propaganda that delegitimizes the Jewish democratic state. “Whoever boycotts Israelis or Israeli institutions, because they are Jews, acts in an antisemitic way,” said Beck, who appears to be the only Bundestag deputy to connect the remembrance of the Holocaust with efforts to combat contemporary antisemitism targeting the Jewish state.The University of Hamburg appointed the academic Farid Esack, a leader of the South African anti-Israel Boycott, Divestment and Sanctions movement, to serve as a guest lecturer on Islamic theology. Esack praised Leila Khaled, a convicted terrorist and member of the Popular Front for the Liberation of Palestine, at a BDS fund-raiser in 2015.“This is a man who expressed antisemitic statements, and who is sympathetic to Holocaust denial,” the Israeli Embassy in Berlin told the Post. “A person with such views has no place as an educator in a university, especially not in Germany, for both professional and moral and probably also legal reasons.”Post email queries to the University of Hamburg’s president Dr. Dieter Lenzen were not returned.The Max Planck Institute hosted the American pro-Hezbollah activist Norman Finkelstein on Monday. He delivered a lecture sympathetic to the US- and EU-designated terrorist organization Hamas to more than 30 students. The head of the Max Planck Institute, Dr. Martin Stratmann, declined to respond to Post requests for an interview about the alleged spread of new forms of antisemitism at the Planck Institute branch in the city of Halle.