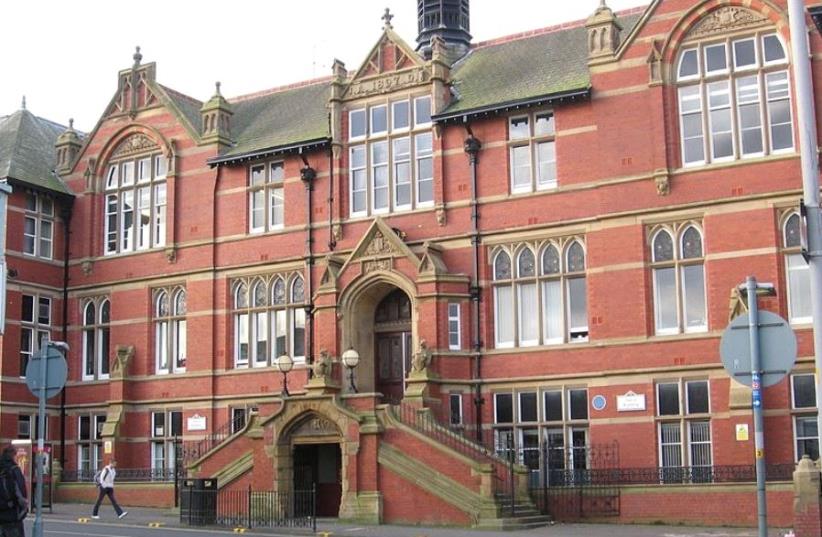 University of Central Lancashire
(photo credit: Wikimedia Commons)
Advertisement
The University of Central Lancashire has canceled an Israel Apartheid Week event that contravened the recently UK-adopted International Holocaust Remembrance Alliance’s definition of antisemitism.The Union of Jewish Students of the United Kingdom and Ireland’s campaigns officer sees a heightened awareness of the issue among UK universities.The session was scheduled to take place next week under the title “Debunking Misconceptions on Palestine.” Anti-Israel activist Ben White and pro-Palestinian academics were due to speak at the event in Preston.A statement issued by a university representative said: “We believe the proposed talk contravenes the new definition and furthermore breaches university protocols for such events, where we require assurances of a balanced view or a panel of speakers representing all interests.“In this instance our procedures determined that the proposed event would not be lawful and therefore it will not proceed as planned,” the statement continued.UJS Campaigns Officer Liron Velleman told The Jerusalem Post on Wednesday that while he does not expect to see many other British universities following suit by canceling events scheduled for the annual anti-Israel event, he does expect the subject to handled with more sensitivity.“Following the move by Jo Johnson MP [the minister for universities and science] to encourage Universities UK to use the IHRA definition of antisemitism, universities will have a heightened awareness of ensuring events during Israel Apartheid Week will not violate values, expectations and laws but also that free speech and robust debate must remain a part of university life,” Velleman said in a written exchange with the Post.Last week, Johnson sent a letter to the head of Universities UK, an organization representing universities across the country, drawing their attention to the definition of antisemitism.“It is reassuring that under that definition, the minister includes the aggression and intimidation that Jewish students have previously experienced during Israeli Apartheid Week as incidents for which universities must take due responsibility,” UJS stated.The Simon Wiesenthal Center hailed the University of Central Lancashire’s cancellation of the session. “This precedent may prove a turning point in the struggle to curb the demonization of the Jewish state at universities,” said Rabbi Abraham Cooper, the Wiesenthal Center’s associate dean. “It provides a legal and moral context for universities in the UK to reject extremism designed to intimidate and isolate Jewish students on campus at a time when there has been a spike in anti-Jewish hate crimes in the UK,” Cooper added.UJS in collaboration with the Board of Deputies of British Jews has launched a #BridgesNotBoycotts campaign to promote dialogue, coexistence and peace on campus, in response “to the smears of so-called Israel Apartheid Weeks,” the board said.UJS said in its own statement, “As a students’ union with a proud tradition of activism, protest and campaigning, we are committed to fighting for free, fair and forthright debate and discussion on our campuses. There is no suggestion that Israel should be exempt from severe or rigorous criticism; indeed, plenty of Jewish students have plenty of their own to offer. Rather, there is a recognition that there is no place for prejudice or incitement against one nation within advocating for the rights of another national group.”The #BridgesNotBoycotts initiative strives to spread a positive and constructive message about Israel and the peace process via participating students at universities around the United Kingdom.The campaign offers students two resource cards: one that highlights organizations which provide positive and effective strategies in place of “divisive and destructive” Boycott, Divestment and Sanctions campaigns; the second, produced in conjunction with We Believe in Israel, educates about the key anniversaries Israel is marking in 2017.Board of Deputies Vice President Marie Van der Zyl said: “This campaign will empower students on campus. Instead of further entrenching division and conflict, we are proposing ways in which students can support peaceful coexistence between Israelis and Palestinians, building rather than destroying bridges between them as BDS seeks to do.”A UJS representative said, “This year, Jewish students, together with many allies around the country, will be calling on their fellow students to build bridges not boycotts. This campaign will see stalls on campus providing resources on ‘Pathways to Peace,’ to counter the toxic narrative of anti-Israel extremists.”A representative of We Believe in Israel said, “It is time to stamp out the misinformation campaign that some people are putting out about the anniversaries being marked this year. Our resource explains the nuances of 1967 and why the [1917] Balfour Declaration is a cause for celebration for the UK and Israel.”