By SAM GREENBERG
SEPTEMBER 25, 2011 10:34
Yale Political Union votes against PA UN bid 311
(photo credit: Sam Greenberg)
Advertisement
The Yale Political Union voted against the Palestinian move for unilateral statehood last week, in a debate that marked success for civil dialogue and for Israel supporters on campus. The debate, which drew over 200 students this past Thursday, was hosted by the Yale Political Union, Yale’s undergraduate debate society and main forum for political discussions on campus. Robert Wexler, former Florida congressman and current President of the S. Daniel Abraham Center for Middle East Peace, gave the keynote address, affirming the resolution which stated “America should oppose unilateral Palestinian statehood.” Wexler was brought to campus to speak by the Yale Friends of Israel.RELATED:
Opinion: Can universities study anti-Semitism honestly?
Yale University launches new program on anti-Semitism
WJC president: Palestinian UN bid will cause terrorism“The students engaged with a sense of purpose and enthusiasm,” Wexler said. “Most of all, the dialogue was thoughtful and reflected a sincere interest to learn the perspective of others.”The debate got passionate at times, and included speeches from pro-Israel and pro-Palestinian activists on campus, but a tone of civility and respect remained throughout the event.Wexler, a Democrat who is considered one of US President Barack Obama’s closest adviser’s on the Middle East, was not shy to agree with some criticisms of Israel that students brought up, including criticisms of Israel’s settlement expansion. Wexler was also passionate in his rebuttals of those who sought to vilify Israel and its actions in the Palestinian territories. Wexler quoted from Obama’s recent speech at the United Nations, and stressed that the US must veto the Palestinian statehood bid since peace can only come through direct negotiations. At the end of the two-hour debate, the resolution against Palestinian statehood passed by a vote of 75 – 44. 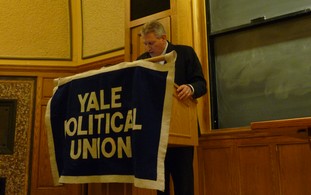 “The event was striking for both its passion and its civility,” said Rabbi James Ponet, Yale’s Jewish Chaplain and the head of the Joseph Slifka Center for Jewish Life at Yale. Ponet said that during the past three decades at Yale, he has enjoyed watching generations of students discuss how to secure Israel’s future as the Jewish homeland. Yale Friends of Israel co-president Steven Morales said he was pleased with the outcome of the debate. He said he was especially happy to see a change of tone on campus from 2008, when the YPU invited John Mearsheimer to speak and passed a resolution calling on America to end its special relationship with Israel. “It’s very encouraging to see that Jewish students and all other Israel supporter at Yale can walk with their heads held high, and never have to feel ashamed about their love for Israel,” Morales said. He said Yale Friends of Israel considers itself an umbrella group for all Israel-related activities on campus, and tries to educate campus about Israeli politics and culture. While the group does not hold any particular political views, it tries to build support for Israel and to foster productive dialogue about the conflict. Yale Political Union Speaker Yishai Schwartz said he thought the debate reflected Yale’s general approach to discussing the Israeli-Palestinian conflict.  “I feel blessed to be surrounded by fellow students who are committed to actually engaging with each other even when we strongly disagree,” he said. “It is inspiring to see this calm disagreement on the floor of a debate hall, rather than chanted slogans and ‘apartheid walls.’”Indeed, the climate of Israel discourse on Yale’s campus is strikingly different from that at some other liberal universities. While there is certainly disagreement among students in regard to Israel, the campus does not have an “Israel Apartheid Week,” nor do students report being harassed because of their political views. Will Jordan, a member of the Yale Political Union and past president of the Independent Party, said he found the debate to be extremely interesting.“Congressman Wexler was really convincing, and I think it showed in the final vote. I’m glad that peace won,” he said. The Yale Political Union, which was founded in 1934, hosts weekly debates on a wide variety of issues and counts many prominent politicians as its alumni.