The Weekly Schmooze: Count the Omar

By LAHAV HARKOV
APRIL 4, 2013 15:03
weekly schmooze 311
(photo credit: Courtesy)
Advertisement
Today is nine days, which is one week and two days of the omer. It's easy to forget to count the omer – the 49 days from Passover until Shavuot – but fans of "The Wire" have a fun reminder. A new Tumblr called "Counting the Omar" features pictures of the legendary drug-dealing character Omar Little, quotes from "The Wire" and the updated daily omer count. 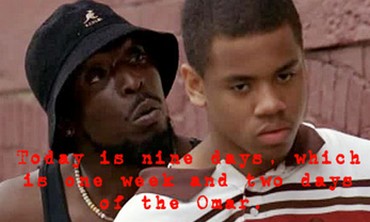 Our neighbors in the south seem to be unable to take a joke. Egyptian "Jon Stewart" Bassem Youssef was arrested for insulting Islam and Egyptian President Mohamed Morsi. Then, the real Jon Stewart – who is friends with Youssef and featured him on "The Daily Show" – spoke out against the arrest, and the US Embassy in Cairo tweeted the clip. The embassy then removed the tweet, following objections from the Egyptian authorities. Meanwhile, the Stewart clip has gone viral. Check it out:

Paul Rudd visited Conan O'Brien this week, in his full Anchorman look – long hair, major sideburns and a bushy mustache – to discuss the sequel to the popular 2004 film. Rudd said he was going to show an exclusive clip from the new movie, which is still being filmed, and then, hilariously pulled a prank he's done several times on Conan's show, replacing the clip with one from Mac and Me, a 1980s film that's a cross between a copy of E.T. and a very long ad for McDonald's.This week's New York features celebrities stories of childhood in New York and, unsurprisingly, quite a few of those famous names are Jewish. There are politicians (like Jacob Lew) journalists (Barbara Walters) and musicians (Regina Spektor), but some of the best are by comedians, like Mel Brooks, Larry David and Joan Rivers.

If you have any news to share with The Weekly Schmooze, write to: weeklyschmooze@gmail.com
Advertisement
Subscribe for our daily newsletter