This week: US election map makes an online comeback, but some outlets portray race as foregone conclusion.

By NIV ELIS
SEPTEMBER 18, 2012 18:16
USelections2012
(photo credit: Supplied)
Advertisement
With the US presidential election in full swing, a well-worn election image is coming back into the national consciousness via the Internet: the state-by-state US election map.Based on the electoral college system the US uses to pick a president, the map paints the states expected to vote for the Democrat blue, those who will choose the Republican red, and the ones that are too close to call - the ever-important swing states - a neutral yellow, tallying the total number of electoral votes each candidate is expected to receive.As the November 6 election draws closer, more and more commentary fills the airwaves and Internet highways using the latest polling numbers, analyses of the groups that comprise the swing states’ populations and basic arithmetic to lay out how each candidate can reach the magic number of 270 electoral votes to win the election.While television outlets such as CNN had the monopoly on election maps and their analysis just a decade ago, today it seems that every news outlet online has their own map, and they don’t always look the same. That may be a good thing; recall the drama that unfolded on election night in 2000, when CNN famously called Florida for Al Gore and then reconsidered (it ultimately went to George W. Bush after several recounts and a Supreme Court decision, tipping the election in the process).Perhaps reflecting the caution of a lesson learned the hard way, or perhaps hoping to capture the drama of a toss-up election, remains peppered with swing states, painting Nevada, Colorado, New Hampshire, Wisconsin, Iowa, Ohio, Florida, North Carolina and Virginia yellow. Like many of the online maps, it allows users to make their own predictions, flipping states in one direction or another to draw out a path to electoral victory or ruin for their candidate of choice. 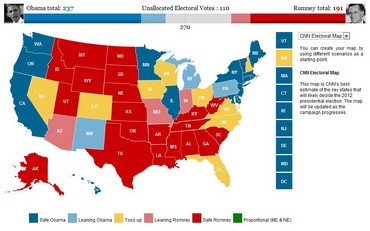 Politico, the inside-the-beltway publication that focuses on the nitty gritty of the campaign, takes a somewhat different approach. It cites 10 swing states (the nine mentioned above plus Michigan), but paints them blue or red depending on the polls, even if those polls are within the margin of error or very, very close. Note Iowa, depicted in blue for US President Barack Obama despite the poll giving him only a 0.2% lead. On election day, however, that’s all he’ll need to capture those electoral votes. On one hand, Politico gives a stronger impression of where the race is headed - in this case toward an Obama reelection - than CNN’s nail-biter of a map. On the other hand, it is more likely to change over the course of the election as polls change. 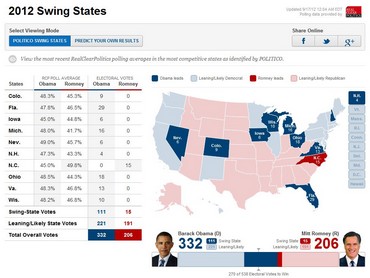 Fox News, ever-concerned about living up to its motto of “fair and balanced,” actually offers three maps in one: a guarded map based on RealClearPolitics polls (the same source Politico uses, it should be noted), one based on the analysis of Republican strategist Karl Rove, and a third from Democratic strategist Joe Trippi. The latter believes that - were the election held today - Obama would already have the election in the bag, while the others leave several paths to victory for Mitt Romney. 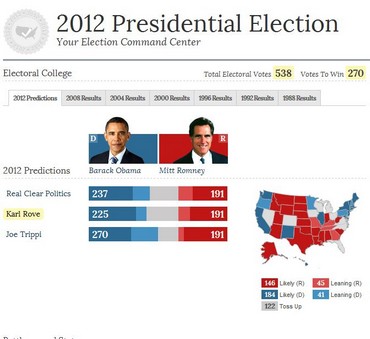 The liberal Huffington Post leaves no such room for error: by its calculations, the only true toss-up is Iowa (remember the close margin in the Politico map?), but the rest lean heavily enough to show the race for Obama with 326 votes to Romney’s 206.Perhaps the most important map, however, is the one on the “Five Thirty Eight” blog (named for the total number of votes in the electoral college), run by poll guru Nate Silver. Whereas CNN burned itself and the reputation of pollsters in 2000, in the 2008 race, Nate Silver and his blog redeemed polling by digging deep into the statistical biases and implications of each new data set, picking out long-term trends and weeding out the good polls from the bad. He accurately predicted how 49 of the 50 states would vote in 2008, tacked the popular vote within a percentage point and got all the senate races right, making such an impression that the New York Times picked him up for their election website.Like Politico, Silver has no compunction about painting the whole map in blue and red (albeit in varying shades). He takes it a step further, however. Not only does he predict that Obama will win the election, but he assigns him a 74.7% chance of doing so. Of course, the data and predictions change over time, so he also tracks his predictions over time to show the trend: 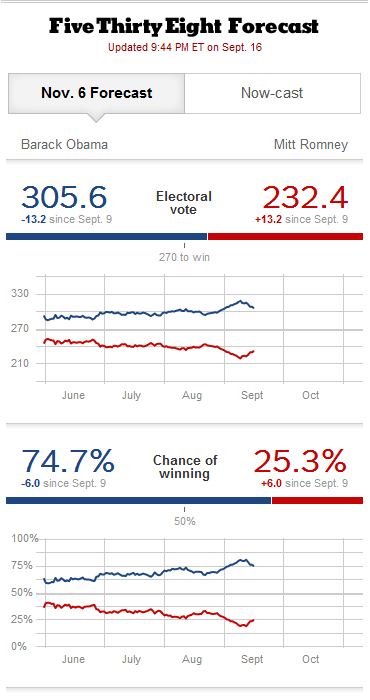 New York Times poll trackerMost of these polls and predictions, obviously, spell very bad news for Romney. The only election map handing him the keys to the White House used such a far-fetched premise -- that any state in which Obama was polling under 50% could swing toward Romney, even if Obama was leading by, say, 49 to 42 -- that Comedy Central decided to featured it. 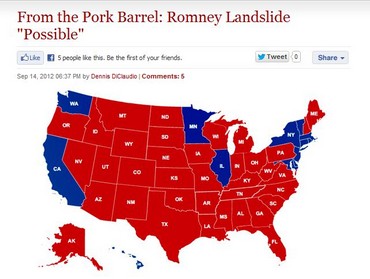 “I personally discovered that if every voter in every state that has an "e" in its name casts a write-in vote for former Hollywood Squares center square Paul Lynde, we might just be seeing out first dead gay president in November,” the fake news website wrote.But despite all the data, polls and maps that favor Obama as the probable winner, Romney and his supporters would be mistaken to think that the race is a foregone conclusion (Nate Silver still leaves Romney a 1 in 4 chance of taking back the momentum based on the close polls). With seven weeks until election day, two presidential and a vice-presidential debates scheduled, violence unfolding in the middle east, two more monthly jobs reports in the making, promised stimulus from the federal reserve and an entire sea of political blunders at the candidates’ disposal, there is never certainty of what will be on voters’ minds as they walk into the ballot booths in November.#USelections2012 offers weekly insight into the US presidential election through a social media lens, tracking candidates as they try to reach 270 electoral votes in 140 characters or less.The writer is a Breaking News editor and blogger at The Jerusalem Post. Read his blog ‘The Bottom Line’ here.
Advertisement
Subscribe for our daily newsletter