Called the "StemRad 360 Gamma" belt, it shields the body from the effects of gamma radiation. 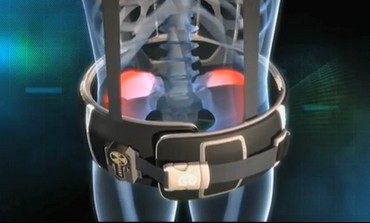 It doesn't look like cutting edge technology, but this belt could be a life saver for first responders to a nuclear accident.Called the "StemRad 360 Gamma" belt, it shields the body from the effects of gamma radiation."It may look simplistic on the outside but the structure inside is three dimensional and very unique. The idea here was to create a product that on the one hand protects but on the other hand is not over burdened weight." Oren Milstein is co-founder of Stemrad, the company behind the belt. He won't give much away about its key technology, but says it's partially comprised of lead and has been designed to protect the pelvic area, where most of the the body's renewable bone marrow is concentrated.Milstein says protecting that bone marrow can be crucial to ensuring survival after radiation exposure."Conceptually, it's agreeable that the bone marrow is the most radiation sensitive tissue and that bone marrow is able to regenerate itself. So kind of like adding one plus one, we know that if we perform partial shielding on bone marrow, we get an increased survivability of the individual."The belt hasn't yet been tested in real radiation situations - like the recent disaster at Japan's Fukushima Daiichi nuclear plant - but simulations using mannequins have demonstrated its effectiveness in absorbing radiation."When I was first told about it, I was at first skeptical."Nobel laureates Roger D. Kornberg and Michael Levitt were quickly persuaded of the belt's capabilities and now serve on Stemrad's scientific advisory board."I think to make a full body suite with this level of protection would weigh something like 200 kilos so it wouldn't work for most people. This I think weighs 15 Kilos or something like that so you can certainly be free and move with it and so on."But the belt doesn't offer full protection from radiation or allow an unlimited stay in an irradiated area - and at least one expert has said the device leaves critical organs like the liver and thyroid exposed.But Milstein says the belt can protect the wearer from a dose of up to a 1,000 rads, a level of poisoning that can cause serious illness, even death.Orders have already come from Japan, Israel and Russia. And Stemrad hopes to gain even more exposure in the coming year.