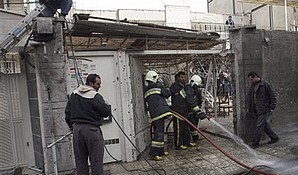 IRIB did not give a source for the allegation."As a result of the bomb planted by Zionist and American agents two cars and a motorcycle were severely damaged and the windows in the surrounding residential units were shattered," the report said.The professor was "martyred this morning in a terrorist act by anti-revolutionary and arrogant powers' elements," the broadcaster said.According to state-run Press TV, Mohammadi had just left his house on his way to work when the explosion went off.The blast shattered the windows of his home in northern Teheran's Qeytariyeh neighborhood and left the pavement outside smeared with blood and strewn with debris. The semiofficial ISNA news agency quoted Teheran prosecutor Abbas Jafari Dolatabadi as confirming the killing and saying no one has been arrested.Neither report said whether the 50-year-old Mohammadi was connected to Iran's nuclear program, which the West suspects is aimed at developing a nuclear weapons capability.Iran denies having any intention to produce weapons and insists its nuclear work only has peaceful aims, such as energy production.A government news Web site, Borna, described Mohammadi as a senior nuclear scientist but gave no other details.The Web site of Iran's state television had earlier declared the bombing a "terrorist act by counter revolutionaries and elements of arrogance," a reference to the United States. Security forces are investigating, the report said.The United States and its allies in Europe have been pushing Iran to halt its uranium enrichment program, a technology that can be used to make fuel for power plants but which also offers a possible pathway to weapons development.US Secretary of State Hillary Rodham Clinton said Monday that the Obama administration had concluded that the best way to pressure Iran to come clean on its nuclear ambitions is to impose sanctions aimed at the country's ruling elite."It is clear that there is a relatively small group of decision makersinside Iran," Clinton told reporters traveling with her on the firstleg of a nine-day trip across the Pacific. "They are in both politicaland commercial relationships, and if we can create a sanctions trackthat targets those who actually make the decisions, we think that is asmarter way to do sanctions. But all that is yet to be decided upon."
Subscribe for our daily newsletter