A hot summer ahead for the Knesset

The Knesset’s summer session begins Monday under the shadow of Prime Minister Benjamin Netanyahu’s legal troubles and with a host of other fiery topics on the agenda. 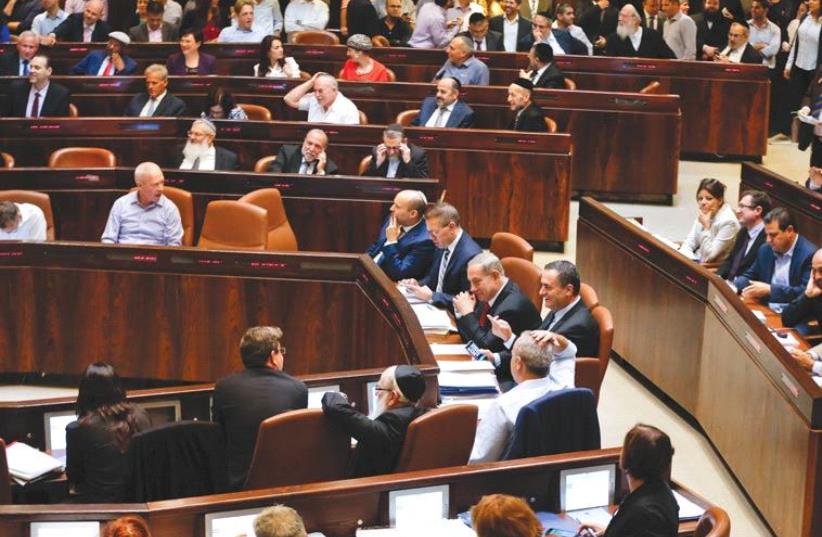 Live Knesset Israel
(photo credit: REUTERS)
Advertisement
Whether it’s because of the climbing temperatures or the fact that it’s only about three months long, the Knesset summer session, beginning Monday, is generally considered a slow time of year. This year, however, lawmakers won’t be getting in some lazy summer days, with plenty of subjects on the docket that will undoubtedly lead to heated debates and maybe even political upheavals.Here are just a few of the hot topics, in no particular order: Settlements. During the Knesset winter session, the threat of Bayit Yehudi leaving the coalition and Likud back-benchers rebelling was constantly present. Politics were all about settlement issues, whether it was the eventual evacuation of Amona, how newly elected President Donald Trump would treat them, or the Ma’aleh Adumim annexation bill. None of those issues has been resolved, and there are even more on the way.Though Trump allowed for an Amona II to be built, his position on other construction is murky, and anyway ground has yet to be broken, and Amona residents’ protest letters have begun pouring in to the press and politicians.The Ma’aleh Adumim bill was proposed two sessions ago, and while its sponsors, Land of Israel Caucus chairmen MKs Yoav Kisch (Likud) and Bezalel Smotrich (Bayit Yehudi), have said many times that this time it’s really going up for a vote, it hasn’t happened yet.On top of all that, sometime this month the Higher Planning Council for Judea and Samaria is supposed to meet to approve building plans in the West Bank, and Agriculture Minister Uri Ariel told The Jerusalem Post last month that the meeting is a test of whether Prime Minister Benjamin Netanyahu is enforcing a de facto settlement freeze or not. If Netanyahu doesn’t lift more restrictions on construction, he might find himself with another coalition crisis over settlements on his hands.Shabbat. Last month’s High Court of Justice ruling allowing Tel Aviv supermarkets to remain open on Saturdays did not make Shas and UTJ lawmakers happy, to say the least. So their solution is to pass a law circumventing the court’s ruling and prohibit stores from staying open on Shabbat – even in the nonstop city of Tel Aviv.This week, reports came out that Netanyahu supports the haredi parties’ bill, but Finance Minister Moshe Kahlon, who has positioned himself as the courts’ defender in the cabinet, said he won’t allow it to happen.Who will win in the war of wills between Kahlon and Shas and UTJ? That remains to be seen. And don’t forget that Netanyahu has yet to enact the Western Wall compromise, by which the egalitarian section on the southern end of the Kotel will be greatly expanded. The cabinet approved it, but no progress has been made, because of haredi opposition; and if nothing changes, the agreement will probably remain on ice.High Court. The haredi MKs aren’t the only ones who want to circumvent the courts. Bayit Yehudi MK Moti Yogev submitted a bill in February that would allow the Knesset to do so whenever the Supreme Court cancels a law passed by the legislature. The controversial proposal fits with his party’s, and much of the Right’s, concern about judicial overreach, but some in the Likud and all the MKs left of it tend to think this kind of legislation harms checks and balances. The bill should come up in the Knesset in the coming months.Israeli Arabs. There are a few things on the agenda for the coming months about which Israeli Arabs, or at least their representatives in the Knesset, will make a lot of noise. These matters may not threaten the coalition, but chances are that the Joint List MKs will make headlines with their reactions to them.One example is the “muezzin bill,” also proposed by Yogev, which would limit the volume and time at which the Muslim call to prayer can be chanted via outdoor loudspeaker. The public campaign against the bill has thus far included creative methods such as a “Muezzin Idol” singing contest.The opponents of the bill are not only Arab lawmakers; MK Yehudah Glick (Likud) has also come out against it, calling for dialogue and compromise instead. Coalition chairman David Bitan (Likud) has threatened to “bury the bill in the committees,” so we will soon find out if it is dead or not.The following are more political than legislative, but will likely shake up the Knesset in the next few months.

Labor and Histadrut elections. It’s a fool’s game to predict who will win the Labor Party election in July. It could be someone familiar who will keep the party stable, like opposition leader Isaac Herzog or former defense minister MK Amir Peretz; it could be someone brash who wants to shake things up, like MK Erel Margalit; it could be a relative unknown who isn’t even a lawmaker.Whoever wins will likely take the opportunity to attack Netanyahu as much as possible, in order to assert himself (or herself, since there is one woman, Dina Dayan, on the ballot).Before that, at the end of this month, there is the Histadrut labor federation election. If MK Shelly Yacimovich wins her bid to head the labor union, she’ll be replaced in Zionist Union’s faction by Saed Salah, who is Druse.Netanyahu’s legal troubles. This could be the biggest upheaval of all. With investigations overshadowing everything the prime minister does, there are quite a few politicians waiting with bated breath to see if he will be indicted or not. If he is, all bets are off. Netanyahu won’t have to resign, but he will certainly face pressure. And there is a very long line of ministers and MKs, each of whom thinks that he or she will be the one to take his place.The Knesset summer session hasn’t even started yet, and Netanyahu is surely feeling the heat.