The Military Censor works in an outdated mode, even if some secrets are legitimate, expert says. 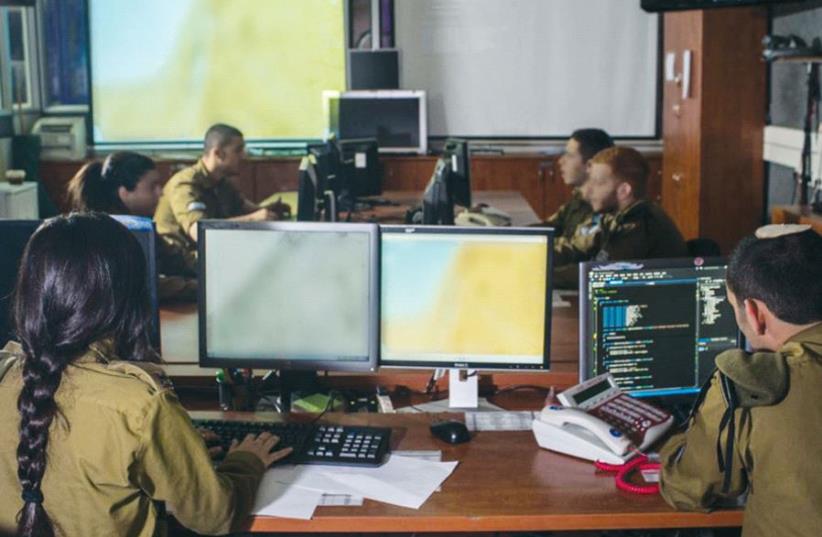 IDF computing school
(photo credit: IDF SPOKESMAN’S UNIT)
Advertisement
The Israeli military censor banned the publication of 271 articles in 2017 and partially or fully redacted another 2,087 news stories that had been submitted for review.
There were a total of 11,035 news articles submitted for review, a decrease from the previous year, in which 13,396 articles were reviewed by the Military Censor and 2,190 were partially redacted.  A total of 247 articles were fully banned for publication in 2016.
The figures were released by the Military Censor following a freedom of information request jointly filed by the Movement for Freedom of Information and the +972 Magazine.
In addition to the news articles, out of 83 books submitted to the military censor, 53 were partially redacted or edited, and only 31 were approved without any changes. The numbers marked an decrease from 2016, when out of 77 books submitted, 36 of them were redacted or completely banned from being published.
The censor derives its authority from laws passed before the state was even established, set by the British Mandate, in which any journalist working in Israeli newspapers and other media outlets must submit articles and all other items related to Israel’s security and foreign relations to the IDF Censor before they are published. More recently, this has included social media postings by journalists.
“The number of stories submitted and handled by the censor is considerably affected by the number of security related events in a given year, as well as the media landscape,” the Military Censor said in a statement.
“The Supreme Court ruled that the censor would prohibit publication only if, in his opinion, there is a near certainty that the publication would cause substantial harm to the security of the state and that is the grounds for the disqualification by which the censor operates,” the statement continued, adding that “intervention in publications is minimal in relation to the security discourse conducted in various media outlets.”
Tehilla Shwartz Altshuler, head of the Media Reform Program at the Israel Democracy Institute told The Jerusalem Post that while there are “obviously” secrets that must be kept away from the public eye, the role of the Military Censor is outdated.
“The British legislation was never cancelled and if you look at it, if someone breaches the censor, a printing machine can be confiscated,” she said.
While the legislation governing the Military Censor may be outdated, the Military Censor has also been monitoring social media sites like Facebook and Twitter.
“At the beginning we thought that in the digital age the censor wouldn’t be able censor but we were wrong, they learned to use social media. We shouldn’t think that because of the social media age we can post everything,” Altshuler said.
Altshuler pointed to the 2017 incident where two Jordanians were shot and killed by an Israeli embassy security guard in Amman. While foreign press reported on the incident in real time, Israeli press were limited by the Military Censor to publishing - and posting on social media sites like Twitter - only after Israeli embassy staff had returned to Israel.
“Don’t underestimate [the Military Censor]. They are effective,” Altshuler said.
Altshuler told the Post that instead of the Military Censor, she recommended that an advisory committee under the Prime Minister’s Office be established for journalists and authors to approach if they have potentially sensitive material in their articles.
“There are secrets that must be kept, it’s a matter of life and death and we want to make sure secrets are kept well and away from the reach of the public, but the way it’s done in Israel is wider than any other democratic country,” she said.