Some in south Tel Aviv see soldiers’ volunteer efforts with immigrants as an affront to the area’s working class Jewish residents. 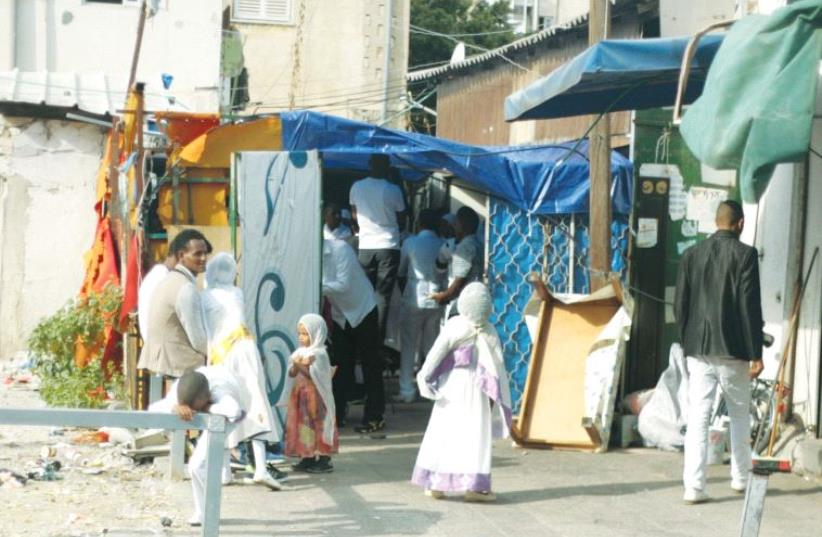 AFRICAN MIGRANTS attend a wedding in Tel Aviv’s Neveh Sha’anan neighborhood
(photo credit: ELIYAHU KAMISHER)
Advertisement
The Bialik-Rogozin School in south Tel Aviv, which serves children from working class and migrant families, is typically quiet during the summer; janitors scrub the floors as a few scattered children shout down the hallways. Yet the school was thrust into the national spotlight when a report on Sunday quoted Defense Minister Avigdor Liberman as calling for a halt to IDF volunteer activities with children of asylum-seekers.According to the report in Yediot Aharonot, Liberman last week told IDF Chief of Staff Lt.-Gen. Gadi Eisenkot to halt any volunteering with migrant children saying, “Charity should begin at home.”Liberman contended that soldiers’ efforts should focus on disadvantaged Israeli citizens. “If soldiers have free time, they should help Holocaust survivors or the needy,” he reportedly said.Bialik-Rogozin, a school of around 1,300 students from 1st to 12th grade, is a symbol of south Tel Aviv’s diversity.Children of asylum-seekers from Eritrea, Darfur and elsewhere in Sudan study alongside children of Filipino foreign workers, Israeli Arabs and Jewish Israelis from working class families. The school has informally hosted numerous IDF volunteers and was the subject of the 2010 Academy Award winning documentary Strangers No More.Members of the General Staff Reconnaissance Unit (Sayeret Matkal) also volunteered last year in the school and hosted a “fun day” with students, according to the report.According to school principal Eli Nechama, IDF volunteers have tutored students who were preparing to take Israeli “psychometric” college entrance exams and provided support for integrating into society.“Many of these kids have Israeli ID cards, they don’t see themselves as different from anyone else, they study according to the Israeli-Jewish curriculum, they go to Poland to visit Auschwitz, and they want to join the army,” Nechama told The Jerusalem Post. “They can’t understand why they should pay a price for who their parents are.”Nevertheless, some in south Tel Aviv see soldiers’ volunteer efforts with immigrants as an affront to the area’s working class Jewish residents.“I felt betrayed,” said May Golan, a south Tel Aviv resident and founder of Hebrew City, an organization that seeks to remove asylum-seekers from Israel. “How the IDF could be involved in such a political subject...it’s like taking salt and rubbing it in our wounds,” she said.Liberman’s statements highlight a long-simmering conflict between south Tel Aviv’s citizens and its immigrant population. In the mid-2000s Israel experienced an influx of around 50,000 African asylum-seekers who concentrated in south Tel Aviv in neighborhoods long plagued by crime and poverty. The exact number of children of asylum-seekers is unclear.Some Jewish residents say they feel neglected by the government and are upset at what they perceive as a disproportionate focus by nongovernmental organizations on immigrants.“It hurts me that the IDF was promoting what it thinks are humanitarian rights on the backs of the Jews who are suffering,” Golan said.In her opinion, IDF volunteers working with migrant children are “cooperating with a left-radical organization and stamping their approval that the illegal infiltrators can stay.”But those who work with the area’s immigrant children say they need special attention.“They are not like any other people,” stated Nechama. “Many have PTSD, they don’t have health insurance, and their parents are not available.”The main NGO working with children of asylum-seekers in south Tel Aviv is Elifelet – Citizens for Refugee Children. Like the Bialik-Rogozin School, Elifelet has hosted numerous IDF volunteers.Yael Gvirtz, founder of Elifelet, called Liberman’s orders a “completely political move. It was sad that it was done on the back of helpless refugee children.”According to Gvirtz, IDF volunteers help counter fear of Israelis in uniform among immigrant youth. “They are raised with great fear of adults and of Israelis in uniform. When they see that the Israeli soldiers are playing with them it changes their reality,” she said.Knesset members also weighed in on the issue.Likud MK Amir Ohana applauded Liberman’s decision and railed against soldiers volunteering with immigrant children as “outrageous” and “spitting in the faces of the residents of south Tel Aviv who are groaning under the burden of illegal infiltration.”Zionist Union MK Nachman Shai disagreed. “Refugee children deserve support and help, and future IDF soldiers and officers will become morally and ethically richer from working together with them,” he said. “The values of the IDF and the State of Israel are fully consistent with this volunteer activity, and rejection implies a moral failure.”While Liberman and MKs debate whether soldiers should volunteer in Israel’s migrant communities, children of asylum-seekers in south Tel Aviv are continuing their summer as normal; some are playing soccer in the street and others are munching on lemon popsicles as they wait for school to start in the fall.