Bezalel students take NY, one step at a time

A collection of over 60 extravagant shoe designs are featured in a special exhibit in Manhattan. 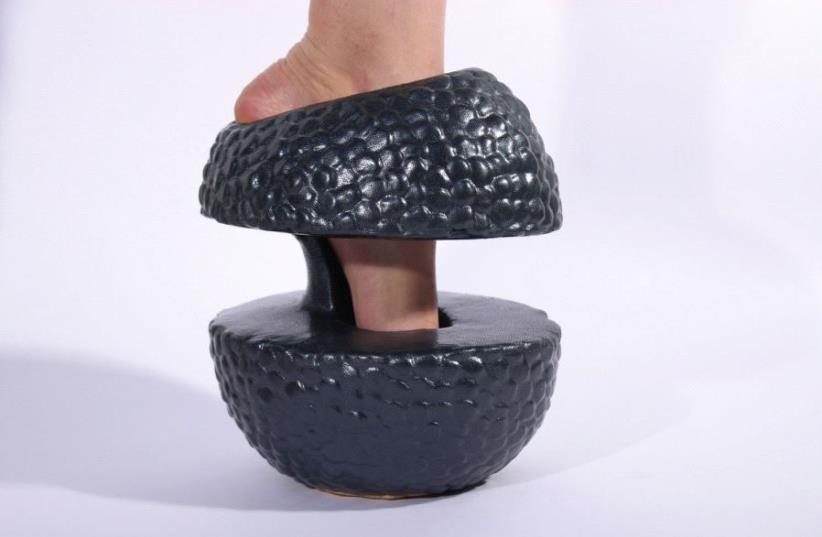 NOA RUBIN, ‘A Tribute to Alexander McQueen’
(photo credit: NOY BIRI)
NEW YORK – For some women they are just accessories, for others true objects of worship. The extravagant shoe designs of 40 students and graduates of the Jerusalem Bezalel Academy of Arts and Design were featured this week in a special exhibit in at the Parasol Projects Gallery in the Bowery neighborhood of lower Manhattan.The exhibit, titled “Walk of Art: Visionary Shoes,” includes 60 contemporary designs and will run until February 13.The project was put together as part of the Friends of Bezalel organization’s annual initiative to celebrate the work of the academy’s students.“Shoes are communicative objects,” the exhibit’s curator Ya’ara Keydar told The Jerusalem Post. “People who come, whether they like the shoes or not, they connect to them, they think about it, it piques their interest.”Keydar is an independent Israeli fashion scholar and curator based in New York.She also teaches a class on “Fashion in Museums” at New York University and has curated multiple shoe and fashion exhibits in the US and in Israel.“The main question I wanted to raise as the curator is: can a shoe be considered a work of art? And is a shoe that can’t be walked with still a shoe? If we neutralize its practical use, can we still call it a shoe?” she says. “I think it’s absolutely a work of art.”The exhibit is divided into nine groups of shoes, each revolving around different concepts such as the ephemeral and the perennial, the beautiful and the painful, the mythology and reality of some of the most charged and coveted objects in fashion history.The Bezalel students created the footwear using different techniques and materials from porcelain, glass, metal and wood to futuristic 3D printed shoes, impossible platforms, wedges and heels.One of the designs, inspired by Salvador Dali’s famous Mae West Lips Sofa, resembles a pair of shiny red lips in which the upper lip embraces the foot while the bottom one allows for balance.Another, made of rectangular pieces of wood surrounding the foot and creating a platform, was inspired by the popular game “Jenga” in which participants have to create a tower from pieces of wood and pull them out carefully to keep the tower standing. The idea, Keydar explained, was to represent the balance and fragility a woman feels when walking in heels.The 60 juxtaposed designs, Keydar explained, tell a story about the role of shoes in our culture.“There is something about shoes that’s so full of history,” she said. “Even when you think of Cinderella: the shoe has the power to change your life. It has a magical ability.”“The shoe is also the only item of clothing that when you take it off it still keeps its shape, even without our body in it. The shape is iconic, it’s a canvas for designers to experiment with.”Keydar also noted that even if in creating the shoes the students tried to completely disconnect from the commercial aspect, the idea of wearability and even comfort, they still use traditional shoe-making methods.“If you look at the stitches, the finishes, the quality, there is an understanding of the anatomy of a foot. It’s still made for a foot,” she said.One of the designers, Reut Alon, is a Bezalel student who specializes in jewelery design, going on her final year of study.For the exhibit, she chose to create a shoe made of a metal net that she hand-shaped to fit a foot.Displaying her work in New York City, she told the Post, is “very moving.”“Every starting designer would be very happy to come to New York and show one of his creations,” she said. “We are students and every chance of exposure is very important to us because it allows us to learn and also because we love shoes and we invest so much energy and effort to come here.”“We got a lot of love and support from people who came and it’s very touching and nice to see there is so much interest in this,” Alon added.Another designer is Noa Rubin, a Bezalel student who specializes in shoe design.One of the shoes she created for the exhibit is a play on Alexander McQueen’s iconic armadillo shoe, which was inspired by the form the animal takes to protect itself from threats. Rubin’s design captures the moment after danger has subsided, when the armadillo has to decide whether to emerge from its protective position.For the past 20 years, Bezalel Academy has offered an advanced shoe design course.Among the shoes on display, some were created by renowned Bezalel-educated artists such as Sigalit Landau, famous for her Dead Sea salt-crystallized objects and Kobi Levi, who designed footwear worn by pop star Lady Gaga.JTA contributed to this report.