The stunning seaside city is a gourmet delight

By BARRY BORMAN
MAY 31, 2019 09:30
The beachfront of Herzliya, which offers an exquisite range of food
(photo credit: BARRY BORMAN)
Advertisement

“You can’t write an article just about one meal,” my wife advised. However, pushing forward the boundaries of investigative journalism – it’s a terrible job, I know, but somebody’s got to sample the food – I’ve done it anyway.In urgent need of some R & R, we headed for Herzliya and the Dan Accadia Hotel, a 1950s icon beautifully updated by an exquisite multi-million dollar refurbishment program. It is ideally located overlooking the seafront, bounded by enticing glimpses of Tel Aviv’s skyscrapers to the south and the cliffs and hotels of Netanya to the north.Inland, Herzliya is a big name hi-tech industrial area; even on the coast it isn’t really a resort as such, just half a dozen or so hotels, a range of luxury apartments and villas, and Israel’s largest marina with 700 berths and many jaw-dropping millionaire yachts. This is surrounded by several excellent kosher meat restaurants, the best of which is Bistro 56, serving mouthwatering steaks and burgers (and terrific apple crumble). For culture vultures, a trip to the Herzliya Museum of Contemporary Art is recommended, where you can engage with installation art and digital media, as well as enjoy air-conditioned respite from the heat outside. You can also visit Beit Rishonim, the Founders’ Museum, its varied exhibits tracing the life, history and culture of the area, with particular emphasis on the connection between Herzliya and Theodor Herzl’s dream. 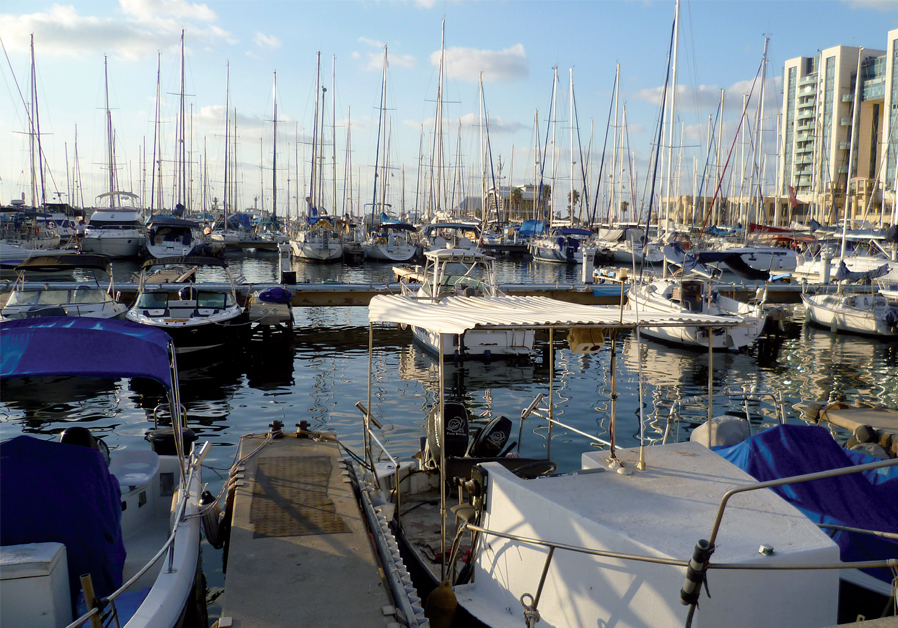 The beautiful view of the Herzliya Marina (credit: Barry Borman)Herzliya’s main asset, however, is its stunning beach, set behind several rocky breakwaters, with kayakers and surfers (mainly young kids taking lessons) gliding the shimmering foam, and the sun-bathing well organized in clutches of brightly colored recliners beneath welcoming umbrella shade. Constitutional walks on the sand, with the warm Med caressing your toes, are obligatory.From the hotel’s high belvedere, perched above its extensive palm-fringed grounds, you can watch Herzliya wake up early morning, the walkers and joggers adjusting their Fitbits on the boardwalk (think LA’s Venice Beach, minus the posing bodybuilders) or be amazed on a daily basis as the azure sea engulfs the sun’s ruby bauble at sunset.After heating up in the plus-30 temperatures, a dip in the near Olympic-sized swimming pool is a refreshing cooler, the ideal place to luxuriate while swallows flit above in acrobatic displays. You can also work out with a personal trainer or indulge in a therapeutic treatment at the hotel’s well-appointed spa.At breakfast, while most diners consume the massive amounts on offer inside the pastel-hued dining room, it’s actually a no-brainer to indulge yourself in the fresh air of the outside decked terrace, eavesdropping on the waves lapping the manicured sands. And you should be aware that this is an Israeli breakfast, so you get eggs cooked before your eyes “as you like them,” homemade olive and tomato breads, a cosmopolitan cheese board, shakshuka, burekas, herring and mackerel (schmaltz, smoked and sundry other variations), together with half a dozen varieties of cheese cake each screaming “eat me” at you, all bolstered with a Middle Eastern harvest of fresh vegetables and fruit.If you can afford to push the boat out, the Accadia evening barbecue is well worth the overdraft. Dining under the stars to the romantic accompaniment of ethnic melodies, you could start with meat or potato dim sum dumplings (color-coded for identification) or, on another night, falafel or Moroccan mince folded into warm pita. There’s soup and salads and then, from the smoking charcoal, your choice of juicy steak, kebab burgers, chorizo sausage, duck, chicken – and they don’t count how many times you go back for more! Just remember to leave a little space for the beautifully crafted desserts, artfully laid out in a separate area.Talking of food (was I?), we now move to the main event, the Friday night Shabbat meal. Even the word “banquet” doesn’t do justice to the manifold delights of this magnificently lavish buffet. You enter through the dessert station, tempting your taste buds for later. To begin with there’s obviously chopped liver and chicken soup, surrounded by “help yourself” bowls of kreplach and kneidlach. Also on offer is a vibrant display of salads the like of which is rarely glimpsed west of the Israeli coast. The mains stations comprise, of course, roast chicken like bubbie made, but there’s also lamb shank softly cajoled off the bone by the server, delicious meat strudel, and entrecote roast beef sliced hot onto your already heaped plate until you find the courage (or sense!) to instruct “enough.” The dining plates are large, but you feel guilty if you don’t cram them to the limit. The trick, if you’re to get anything like your money’s worth, is to pace yourself: savor your wine, talk between courses, observe the other diners – rush it, and it will all be over too soon.And then there’s the aforementioned desserts – forget the concept of the dessert trolley, this is an opera, a ballet, a symphony of sweet-toothed enchantment. I would estimate some 30 divine creations of which, perhaps, 25 involved chocolate in one form or another, all exquisitely presented à la Raymond Blanc. For the children (or young at heart adults), there’s the opportunity to “build your own” ice cream cone, together with lollipops and liquorice laces gracefully draped over their containing glass bowls.While not cheap, and leading to a next day feeling of “why didn’t I eat more” (a facility that’s actually impossible to perform on the night), this is nevertheless an experience not on any account to be missed. In fact, having once partaken, you’ll dream about it until the next time you find yourself with a Friday evening to spare.So, if you’re looking for a “chilled-out” seaside holiday with guaranteed summer sunshine far removed from life’s daily grind, and if you happen to like food (well, we’re Jewish, aren’t we?), then Herzliya’s the place for you.A version of this article was first published in Jewish News in the UK