‘Perfect Strangers’ is imperfect but fun. 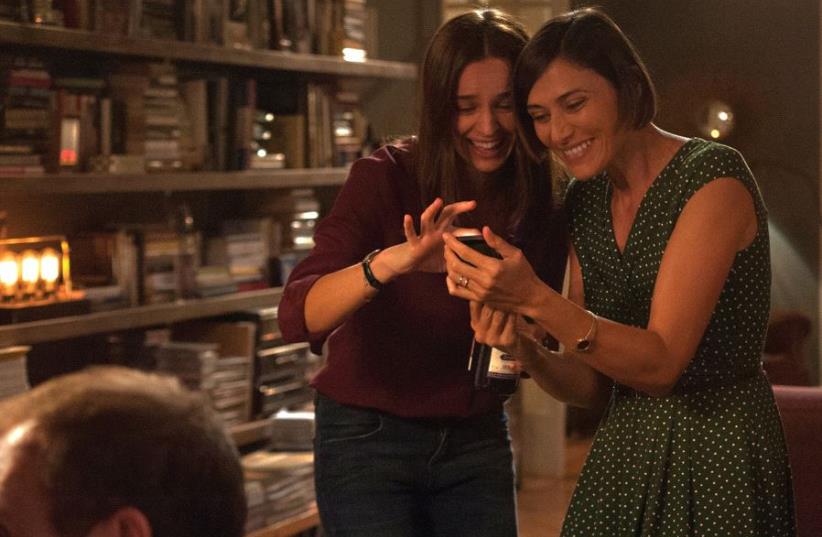 ‘Perfect Strangers’
(photo credit: PR)
PERFECT STRANGERS
Hebrew title: Zarim Mushlamim
Directed by Paolo Genovese
With Kasia Smutniak, Marco Giallini, Edoardo Leo, Alba Rohrwacher
Running time: 97 minutes
In Italian. Some theaters have English subtitles.As you read this, screenwriters are working on an English adaptation of Paolo Genovese’s film Perfect Strangers, which takes place in Italy. In addition to the American version, which is being produced by the Weinstein company, I can imagine this movie being remade in every country around the world because this story will strike a chord everywhere.The premise is simple. A group of friends – three couples and a single guy – get together to have dinner and watch the eclipse. As they chat, they discuss the fact that the marriage of an acquaintance has just broken up because she saw a text from her husband’s lover on his phone. Eva (Kasia Smutniak, a stunning actress who reminded me of the young Nastassja Kinski) has the idea that they live too much on their phones and use them to hide things from each other: that the phones have turned them all into “perfect strangers.” When everyone protests that this isn’t true, she dares them, saying, “None of us has secrets, right?” and they all put their phones on the table, face up, and promise to share every text, email and WhatsApp message that comes in during dinner. Of course, it turns out that everyone has a secret (at least one), and they range from fairly innocuous to marriageending.While some of this movie is formulaic and predictable, watching it all play out is oddly entertaining, for two reasons. The first is that, if we’re honest, we can identify with this situation. Most of us are tethered to our phones these days, and it’s a rare spouse who won’t have something on that phone that he or she wouldn’t want to conceal from their partner. It may not be something scandalous, and not everything here is, but there is certainly something that you would prefer to keep to yourself.The second element that makes this movie worth watching is the charm and attractiveness of its ensemble cast. While the men vary from stunningly handsome to quirkily handsome, the women could be models but have a touch of spirit or character that makes them identifiably human.There have been countless movies, mainly from France, in the past few years, about groups of friends and their misadventures, such as Barbecue. Every detail of their lives is meticulously curated, and every scene looks like a shot from a home furnishings catalog (although not the men-only IKEA catalog circulated in Israel, of course). In these films, while everything looks perfect, it’s sometimes difficult to understand where the characters are in terms of social class. The men in this movie seem to have grown up together, but they have vastly different professions and education levels. The hosts are Rocco (Marco Giallini), a plastic surgeon specializing in “boobs and butts,” who is married to Eva, a therapist. Their best friends are a couple who are well-heeled professionals, Lele (Valerio Mastandrea) and Carlotta (Anna Foglietta), who, like Rocco and Eva, seem to have a perfect life.But Cosimo (Edoardo Leo) is a cab driver who has tried various business ventures that haven’t panned out. He is newly married to Bianca (Alba Rohrwacher, a quirky, appealing young actress), who works as a veterinarian. The final character is Peppe (Giuseppe Battiston), a divorced gym teacher who is the least settled character of the group.The actors are relaxed and selfassured, and there are some classic farce situations that morph into something more dramatic. One character knows he will get a message featuring a nude photo from a woman who sends him one every night. He begs one of the guys to switch phones with him, but then, it turns out, he receives romantic texts from the man’s male lover, so his wife thinks his secret is that he is gay. He has to decide whether to tell her the truth — either way, she’ll be upset — and out their closeted friend.By the end, friendships and marriages are in ruins, and a few of the revelations seem over the top. But at the very end, it’s clear that most of the deceptions will continue. The sly message is that it’s better not to know what’s in the heart — or the phone — of the people in your life.