Hamburgers get respect at Burger Saloon and 26 Hamburger Gourmet. 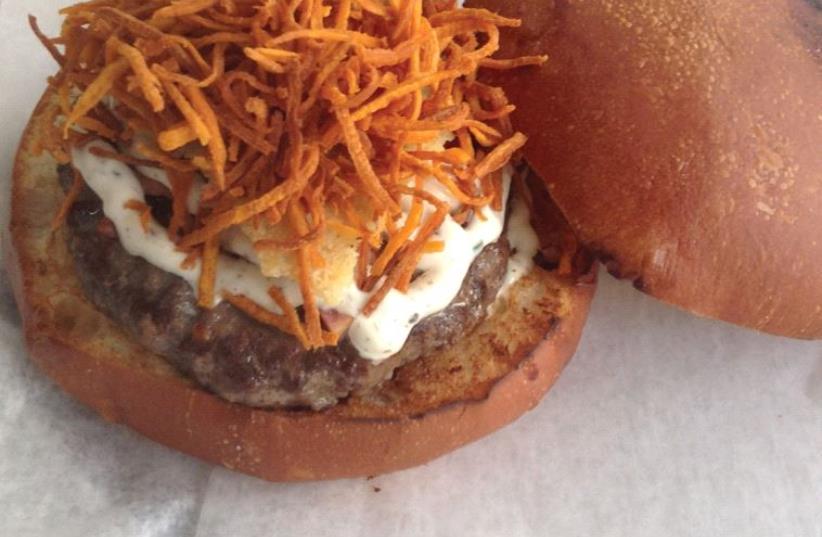 26 Hamburger Gourmet
(photo credit: PR)
Advertisement
The term “farm to table” is a phrase fashionable restaurants like to use to characterize the freshness of their ingredients. Now a new hamburger chain has adopted a similar slogan – “from pasture to table” – to describe the uniqueness of its product: the Wild Burger, from Burger Saloon, a subsidiary of Limousine in the Galilee, reputed to be one of Israel’s finest meat restaurants.The Burger Saloon branch that is closest to Tel Aviv is in Ramat Hasharon. New franchises are planned for other suburbs, but nothing is on the drawing board yet for the city itself. The chain, which describes its food service as “fast casual,” has anything but a casual approach to the quality of its beef. Sirloin cuts are delivered fresh every morning from the Limousine ranch in Ramat Yishai, and then ground just before being grilled and served to customers, who are invited to observe the whole process in the open kitchen.It is not just the burgers that are made in-house. All the condiments are made from scratch, and the buns – available as white, wheat and gluten-free – are baked in front of your eyes. Moreover, all burgers are cooked to order. If you don’t specify a preference, they are grilled medium-well.The classic Wild Burger comes in two sizes: 160 grams (NIS 37) or 220 grams (NIS 43). Burger Saloon’s cheeseburgers (NIS 45/51) are rather unique: Tnuva’s Naama processed cheese is inside the patty, such that the melted cheese oozes out when you cut (or bite) into the burger. We quite appreciated this upgrade. (Roquefort, outside the patty, is the other cheese option.) Burger Saloon’s side dishes are the usual: French fries (NIS 11); onion rings (NIS 14), which are unfortunately made from frozen; a green salad (NIS 12) dressed with a citrus vinaigrette; and a cabbage salad with caraway seeds (NIS 9) in an Asian dressing.The emphasis on home-grown beef notwithstanding, a particularly laudable characteristic of Burger Saloon is the extensive selection of alternative burgers. There is a turkey burger (NIS 39) labeled fat-free, as well as a similar pullet burger (NIS 39), that are both surprisingly good; a healthful salmon burger (NIS 44) that is virtually all fish and hardly any filler; and a soy burger (NIS 39) made with concentrated vegetable stock that elevates this vegetarian burger to among the best in its class.The Sloppy Joes (NIS 42) are quite different from any found anywhere else. The beef version is smothered in pepper cream sauce and served in a ciabatta roll, while the stir-fried sloppy chicken (NIS 42) is seasoned with the house’s distinctive sweet lemon-chili sauce. We enjoyed both, as well as another dish unique to Burger Saloon: Argentine falafel (NIS 46) – beef meatballs served with the house aioli.The only two desserts were pre-packaged, fast-food style: chocolate mousse with a topping of ganache (NIS 15) and the Burger Saloon proprietary “zebra” (NIS 10/15) – a cream cheese mousse with petit beurre cookies and a chocolate glaze. Both made for a sweet and light finish to the meal.Even though the regular menu is suitable for the entire family, the chain also offers kids’ meals. In addition, Burger Saloon promotes a “noon deal,” starting at NIS 53 for a burger, fries and beer.

Burger Saloon (Not kosher). 111 Sokolov St., Ramat Hasharon. Tel: 1-700-705-715.Vive le burger! Just about the polar opposite of Burger Saloon’s slick corporate decor is 26 Hamburger Gourmet’s mis’edet po’alim ambience. Metal card tables and spartan wooden chairs comprise the basic seating arrangements, which belie the truly epicurean ingredients incorporated into all six hamburgers on the menu.Not surprisingly, the eatery – which is modest in appearance only – is the brainchild of French olah Myriam Benarouche. The Gallic influence is reflected throughout, especially in the signature dish: La Truffe (NIS 66), hamburger with smoked goose breast in a truffle sauce, garnished with a Parmesan tuile. It is also topped with a mound of crispy shoestring sweet potato fries, which were superfluous to the rich, lavishly endowed hamburger.As expected, there is a foie gras hamburger on the menu as well, along with other tempting choices. We selected the Raclette (NIS 60) – a hamburger smothered in melted raclette cheese, with chopped chives, onion confit and an arugula leaf. The toasted bun was moistened with an unusual mayonnaise-based barbecue sauce, complementing an already succulent and satisfying hamburger.The side dishes and condiments made from scratch were prepared with similar attention to detail. 26 Hamburger Gourmet’s trademark sweet potato fries (NIS 15) are paired with Roquefort sauce; the French fries (NIS 13) with garlic mayonnaise; and the onion rings (NIS 15) with tartar sauce – although they are also good with the house ketchup. In fact, the onion rings were the best I have had in this country: generous slices of sweet white onion dipped in beer batter and fried to perfection.The house salad (NIS 16) was also excellent: mixed greens, arugula, apple, almond and blue cheese, lightly dressed in a slightly sweet vinaigrette.The house beverage is sweet tea, served cold but not iced, which is complimentary with business lunches. This being a French establishment, of course, there are two French wines – a rosé and a red – to choose from, as well as a fine domestic craft beer. During weekday Happy Hours (4 to 7 p.m.), a beer and a burger cost NIS 60.Desserts (NIS 25) were predictably continental: crème brûlée, and a chocolate mousse with slivered almonds that managed to be simultaneously fluffy in consistency and dense in flavor.26 Hamburger Gourmet is a place for burger connoisseurs (while their vegetarian companions have the option of a mozzarella steak with sun-dried tomatoes and pesto), who can enjoy creations that cost a third less than you would expect to pay for much the same thing elsewhere. An indulgence that is guilt-free budget-wise, even if not in the calorie or cholesterol department.

The writer was a guest of the restaurants.
Advertisement
Subscribe for our daily newsletter