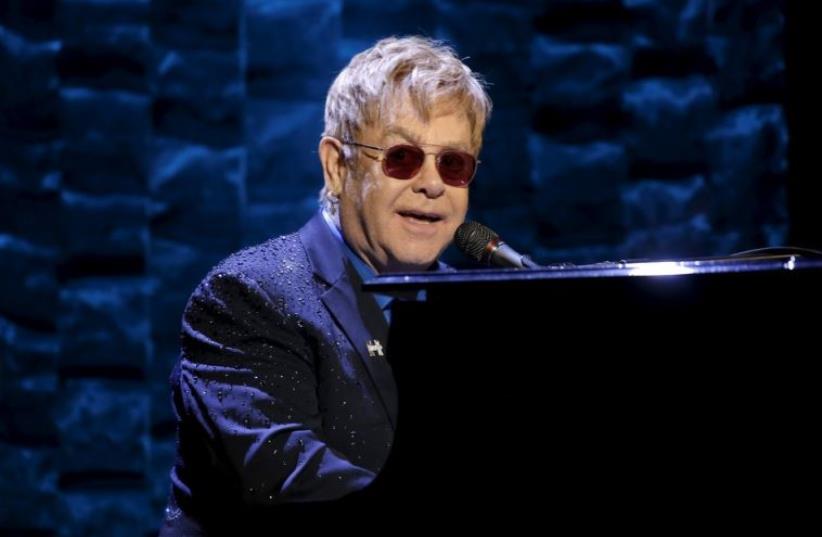 Elton John
(photo credit: REUTERS)
Advertisement
Fans of all ages were happy to let the sun go down in Tel Aviv’s Yarkon Park on Thursday night, as veteran rocker Elton John took the stage to perform for close to 40,000 fans.The rocket man did not disappoint, churning out his biggest hits alongside his new music without his powerful baritone faltering for even a moment. John opened the show – punctually I might add – with “Funeral for a Friend/Love Lies Bleeding,” before veering into “Benny and the Jets” and then “Candle in the Wind,” three songs from the 1973 double album Goodbye Yellow Brick Road. And more than 40 years later, almost everyone crowded into the park knew every word. Bedecked in a knee-length royal blue suit jacket generously sprinkled with rhinestones and with a pink bedazzled “EJ” on the back – and metallic pink shoes – John isn’t quite as flamboyant as he once was, but he still has style.Though the once infamous drama queen seems to have been mellowed by marriage and fatherhood; there was no sign of the singer who arrived in Israel in 1993 and – after getting pissed at the paparazzi – turned right around and left the country before performing (he returned in 2010 with no such histrionics).“We are very happy to be back in Israel,” John said near the top of the show. “We hope you enjoy the show we’ve prepared for you tonight.”Though reports circulated of his rockstar-like demands ahead of the performance, on stage John was nothing but gracious.“Thank you so much, Tel Aviv – we couldn’t have asked for a better audience or a nicer place to play,” he said. Reflecting on his impressive 47 years in the business, he said the one constant “is you guys, the audience.”“I love you and I’m deeply grateful for everything you do.”I should confess that I grew up on Elton John. While I may not have been alive during his heyday, my mother is what could be termed a superfan; while other kids may have been listening to Baby Einstein or Kidz Bop, we reliably had “Crocodile Rock” and “The Bitch is Back” churning out of the car radio speakers (both of which he played Thursday).Indeed fans of all ages were crowded into the show, from those older than the 69-year-old rocker to the eight-year-old girl whom dozens around me stopped to help when she got separated from her parents. He was accompanied on stage by his loyal and veteran band, including Nigel Olsson on drums, who’s 67, and Davey Johnstone, on guitar, who’s 65. But on stage they were just a crazy group of kids playing their hearts out, with incredible talent.While John played three songs from his newest (and his 32nd produced in the studio) album, Wonderful Crazy Night – “Looking Up,” “Blue Wonderful” and “A Good Heart” – he knew what the people were there for – and he delivered.From “Tiny Dancer” to “Daniel,” “Philadelphia Freedom,” “Goodbye Yellow Brick Road,” “Rocket Man” and “I’m Still Standing,” among many more, he performed unflaggingly for two-and-a-half hours, with many extended piano riffs sprinkled throughout.He capped off the evening with “Circle of Life” – complete with Lion King footage playing on the screen – and left the whole audience hoping he’ll be back again in Israel soon.