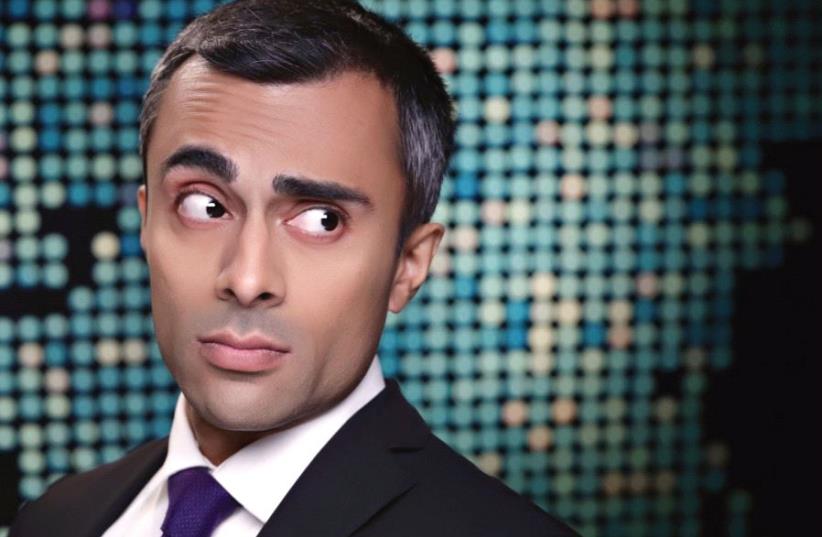 ‘I PROCESS everything through humor, good and bad – it keeps you honest when things are good and optimistic when they aren’t,’ says comedian Pardis Parker.
(photo credit: REUTERS)
Advertisement
When it comes to comedy, they say timing is everything. So things couldn’t have gone any better for Pardis Parker, a Sri Lankan-born, Canadian-raised and Los Angeles-based comedian who just launched a new show on Comedy Central’s digital platform.Mideast Minute, which released its first three episodes last month, tackles nothing other than immigration to the US from the Middle East in its very first episode. Parker plays Jamsheed al-Jamsheedi, who hosts a satirical news show which mocks US propaganda efforts aimed at the Arab world, like Alhurra, the Arabic-language channel launched under the Bush administration.“With Donald Trump’s election win leading to worries our borders will close, it’s time for the Middle East to realize that immigrating to the United States... is overrated,” Jamsheedi says. He then proceeds to list statistics on unemployment, home prices and food availability in an attempt to convince Arabs that the American dream is no dream. But Parker never imagined how realistic his satire would turn out to be.“We chose it as the first episode because we thought it was a wacky, extreme topic that would help people ease into the premise of the show,” Parker told The Jerusalem Post via email. He never imagined that by the time the episode was released, it would actually be a reality.And the second episode? That one addresses the idea of Jared Kushner serving as some sort of Middle East peace envoy – another idea closer to reality than it is fiction.While it’s called the Mideast Minute, each of the episodes – which are available on the Comedy Central website, the channel’s Snapchat account and on YouTube – are two to three minutes long. The network hasn’t announced a release date for any future episodes.In each show, Jamsheedi takes time to address the topic of the day, interspersed with real news clips from US TV networks, lending a surreal note to, well, a surreal news landscape of late. Parker has a sharp, smart tone, but some of the jokes are a bit predictable, especially in these satire-saturated news times. But the constant news ticker across the bottom of the page provides some of the funnier zingers: “Non-Violent ISIS Members Suggest Sarcasm, Passive Aggression” and “Taliban Woman Wins No Hold ‘Em Tournament, Award for Best Poker Face.”Parker recently answered some questions via email about his new show, and working in comedy in the age of Trump.Many comedians had said the election of Trump would be great for business – do you agree?I grew up in a family that believed partisanship was divisive, so I’ve never really gone after politicians or media personalities the way some comedians have. I think I tried earlier in my career, but it didn’t come naturally, and it still doesn’t. The new administration remains a gift, though – their policies and perspectives are such a departure from what came before that it’s given rise to conversations and debates we wouldn’t otherwise be having – and that, I think, is great for comedy. Wrestling with ideas and positions, good and bad, that weren’t on our radar. Think about it – there’s at least five comedians in the US who’ve stopped telling dick jokes and started tackling policy instead, and that, I think, is a net positive.Do you see your show as appealing to Arab Americans or a wide audience?The show’s name is a bit misleading.We’re focused on the lies the American government sells, more than anything, and I’m hoping to approach the writing in a way that makes the comedy as accessible as possible to a wide audience, both in the US and abroad.

Is it a coincidence that your first episode is about dissuading Middle Eastern immigration to the US – considering the timing of Trump’s ban?We shot the first few episodes before Christmas, when the idea of a Muslim ban was still seen as an unfulfillable campaign promise that was unlikely to be pursued, and we chose it as the first episode because we thought it was a wacky, extreme topic that would help people ease into the premise of the show. We never expected the ban to be put into place, and the timing with the release of the first episode was eerie. I mean, we specifically chose it because of how ridiculous and unrealistic it was. And then it happened.It was creepy. Anyway, next episode is about me winning a lifetime supply of Nutella, so, you know, your move, coincidence.

Israelis – and the Middle East as a whole – are pretty used to dark humor as a coping mechanism – do you think that’s the way the US is heading? Instead of crying, laugh? I process everything through humor, good and bad – it keeps you honest when things are good and optimistic when they aren’t. And you’re right, I think the country’s doing the same. And that’s great.“This, too, shall pass,” you know? It’ll be a footnote in history books, as long as you believe people are fundamentally good.And I do. Look at the graph as a whole and we’re trending upwards. I have no reason to believe that’ll end soon.

What kind of feedback have you gotten so far? Any hate mail? It’s been really positive. It’s still early, obviously, and the show’s only a fraction as good now as it will be in a year, but people are responding to it. Hopefully I get better and we keep gaining fans as I do.
Advertisement
Subscribe for our daily newsletter