"Anyone with an understanding of reality can see that Israel will never return the Golan Heights to Assad, a psychopath who has murdered half a million of his own people." 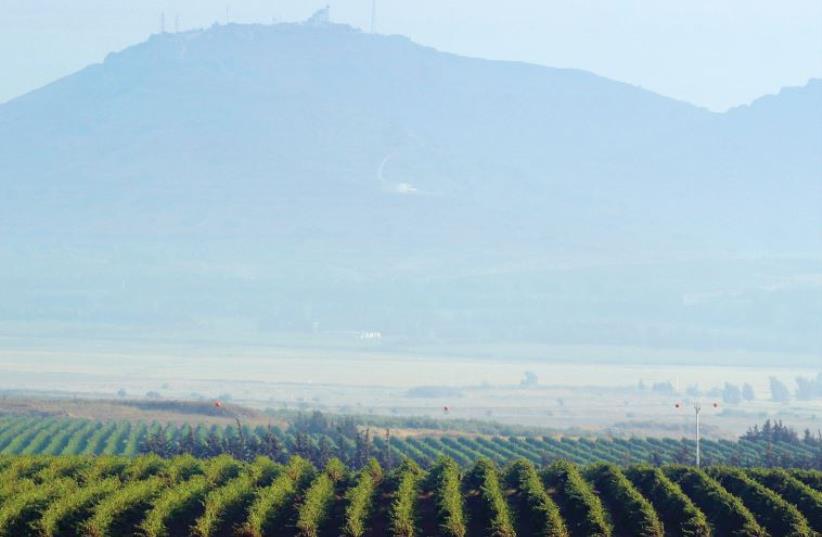 A communications post is seen above a Golan Heights Wienry vineyard
(photo credit: REUTERS)
Advertisement
A Related Video You May Like:
Finance Minister Moshe Kahlon endorsed a new plan on Wednesday to rapidly develop the Golan Heights and raise its population from 22,000 to 100,000 Jews within a decade.The plan, which was written by Deputy Minister Michael Oren, calls for forming an inter-ministerial committee led by Finance Ministry Director- General Shai Babad to improve the quality of life in the Golan and bring more tourists to the area.“The missed opportunity in the Golan is not only demographic but also a security danger,” Oren said. “Iran is trying to replace the Sunni population near the border with Shi’ite forces to build a base in Syria and make the Golan a conflict zone with Israel. We must take advantage of this window of opportunity.”
Syrian army regains full control over Damascus after 7 years, May 22, 2018 (Reuters)
Prime Minister Benjamin Netanyahu’s former national security adviser Uzi Arad revealed Wednesday that four prime ministers, including Netanyahu in two different terms, conducted comprehensive and intensive negotiations in which Israel offered to leave the Golan.The announcement of the government’s plan preempted a rally for the Golan in the Knesset hosted by Yesh Atid leader Yair Lapid. At the event, Lapid called for the entire world to recognize Israeli sovereignty over the Golan, because Israel will never give it to Syrian President Bashar al-Assad.“Anyone with an understanding of reality can see that Israel will never return the Golan Heights to Assad, a psychopath who has murdered half a million of his own people and whose partners are Iran and Hezbollah,” Lapid said at the event. “The Golan is strategically important for the entire North. We will not allow it to become an area from which Israel is under constant threat – not now and not after Assad.”Lapid explained that the argument saying the Golan Heights historically belonged to Syria was absurd. He argued that Syria ruled over the Golan Heights for only 21 years, while Israel’s connection can be traced back to the Bible, in which the Golan was in the biblical Bashan in the territory of the tribe of Menashe.He added that during archeological excavations in the area, a coin from 67 CE was discovered and on it an inscription, “For the redemption of Jerusalem the Holy.” Lapid pointed out that the Romans came to the Golan to crush the Jewish rebellion, and already back then, the Golan was a fortress that protected Jerusalem.“In meetings we’ve held over the past few years, and even more so since President Trump was elected, it is clear that there is a greater willingness than ever before in the United States to recognize our sovereignty over the Golan Heights,” he said. “For that to happen we must work together, not fight over credit. Everyone must work with the people they know, with the senators and congressmen they know. And it will happen.”“Controlling the Golan guarantees not only our water sources and the security of the Galilee but also the existence of all of Israel,” said Golan Regional Council head Eli Malka, who joined Yesh Atid.Arad cautioned that Israel's continued control over the Golan was not guaranteed, even with Trump as president.The event was attended by MKs from across the political spectrum, including Yehudah Glick (Likud), Eli Ben-Dahan (Bayit Yehudi), Revital Swid (Zionist Union), Akram Hasson (Kulanu) and Katzrin Mayor Dmitry Apartsev (Yisrael Beytenu).