The Egyptian president sees Sinai militants as an existential threat, but the army's initiative to recruit Sinai tribal fighters is failing. 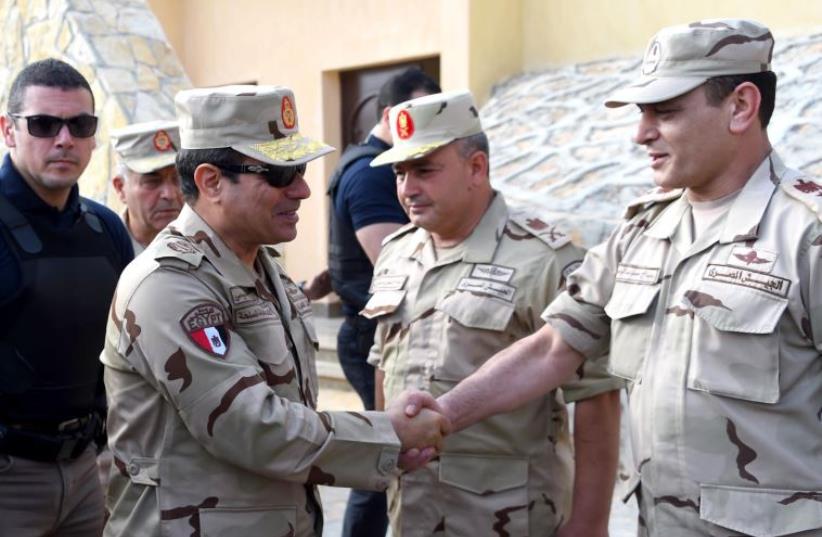 Al-Sisi in uniform making trip to Sinai
(photo credit: MOHAMED ABDELMOATY / EGYPTIAN PRESIDENCY / AFP)
Advertisement
ARISH, Egypt - An Egyptian military effort to recruit and arm tribal fighters to take on Islamic State militants in the Sinai is failing, according to security sources, Sinai residents and tribal figures.The military launched the program with much fanfare last year and tribal leaders pledged to provide hundreds of fighters. But the number of fighters in the field is no more than 35, security sources say. The scheme has been hampered by the military's reluctance to provide weapons to local fighters and by attacks by Islamic State, which are scaring off would-be tribal troops.The failure is a blow to President Abdel Fattah al-Sisi, who has promised to crack down on militants, whom he sees as an existential threat to Egypt. Islamic State's insurgency in Sinai gives the ultra-hardline group a fourth front in the Middle East after Iraq, Syria, and pockets of Libya.In statements and videos, Sinai Province, the Sinai branch of Islamic State, has said it has executed at least 17 people so far this year. On Feb. 28, the group warned on its Telegram channel, which functions as an encrypted online message board, that it had set up checkpoints around the Sinai to intercept and kill anyone who collaborates with the military.In January, Islamic State wrote in its weekly magazine Naba', which runs news from the group's various branches, that the Sinai branch had killed 1,400 people - members of the military and police as well as collaborators and tribal fighters - in the previous 15 months. The military has disputed this figure and said only 69 military personnel were killed in that period.It would not comment on its Sinai operations.The army had hoped its plan, launched in April last year, would gain it an edge in the massive region, which stretches from the Suez Canal east to the Gaza Strip and Israel. It wanted to team up with tribal leaders and local fighters who know the terrain.The local fighters promised to provide 300 men who could bring intelligence and help close down routes used to smuggle in weapons from neighboring countries. Those fighters were to be organized in what the military calls "popular committees."But a counter-terrorism researcher who closely watches the Sinai and did not want to be named because of the threat of violence when he visits the Sinai said the strategy was floundering. "The militias are child's-play. It is a failed initiative. These guys are getting the floor wiped with them by the Islamists. They do not have the training to match them."DIGGING THEIR OWN GRAVESGiven the history of tensions between the Beduin and the military, the scheme was never going to be easy to implement.The Sinai's Beduin are seen by some in government as a fifth column, while tribesmen have long felt neglected by the central government, tribal leaders say. Some senior officials initially remained uneasy about handing over weapons to local fighters.A police captain stationed in North Sinai said tribal fighters receive no formal combat training but are advised by the military and police.Even some tribal leaders were reluctant to have their men armed. One senior tribal member, who was once at the forefront of the military's campaign, said arming tribal fighters could cause infighting."Help the army? Yes. But carry guns, no. We do not form militias," said the man, who is on an Islamic State hit list and has moved away from North Sinai, the epicenter of the insurgency, after militants attacked his home.But the main reason the military has struggled to recruit more tribal fighters has been the punishment those who have joined have faced when captured by Sinai Province militants.Abdelrahman al-Moqata'a was one of nine prisoners beheaded or shot by the group in January. On a Sinai Province video of the executions, the men all said they had fought alongside or provided intelligence to security forces.In the video, Moqata'a is seen digging his own grave. "This is the fate of those who work with the army, whether young, old, or a child," he said, standing in a sandy ditch up to his waist."No one work with the army. This is the advice of the brother digging his own grave."Sinai Province later circulated a list of men it wanted dead for "crimes" such as "forming militias against Muslims" and spying for the military.

NEW RECRUITS, BUT NOT NEARLY ENOUGHDespite the dangers, some tribal fighters remain enthusiastic about helping the army.Some 500 meters outside the eastern entrance to al-Arish, North Sinai's provincial capital, motorists are questioned at a police checkpoint. One day in January, two masked men brandishing assault rifles stood guard about 100 meters up the road. They were young members of a popular committee."We are a group of youths who decided over two months ago to do our part in protecting our people from what the militants are doing," one told Reuters."At first there were nine of us. We met with police and military leaders, asking to be allowed to help get rid of these militants after the city became a war zone home to murder and horror," he added in a thick Bedouin accent. His group now numbers 15, and has been asked to provide the military with local intelligence.Initially the authorities did not want to give the men guns, the man said."A while later we went back and told them it was important they allow us to carry weapons to protect ourselves and families and they agreed, but under certain conditions."A security source said the tribal fighters can only use the guns to help secure checkpoints or to repel an attack. They also have to tell the military who is participating in each shift or mission.Residents in Arish, Sheikh Zuweid, and surrounding villages have mixed views of the army initiative. Some said the tribal fighters had restored some normality to the province. Others complained that the fighters steal food from them or bully them."We don't have a problem with them helping (the security forces), said one shopkeeper. "But they shouldn't bully people and act like thugs."