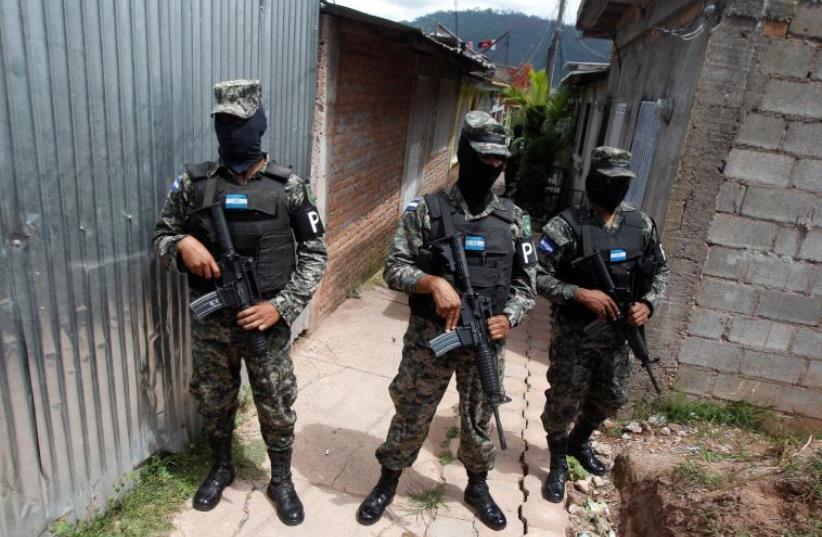 Honduran Military Police
(photo credit: REUTERS)
Advertisement
Honduras is due to approve a bilateral agreement with Israel that aims at strengthening the Central American nation's military with help from the Jewish state, according to local media on Sunday. Honduran President Juan Orlando Hernández has announced that he will present his nation's Congress with the deal signed with Israel that has the capability of strengthening the country's armed forces to a level that Honduras "likely never would have obtained" otherwise.While Hernández was anticipating opposition from some lawmakers, he nevertheless will push for legislative approval of the accord with Israel so as to bolster "the capability of guarding our national territory," reported the pan–Latin American satellite network teleSUR."I am presenting the National Congress with a very important agreement that is crucial for the growth of the Honduran nation - an agreement with the State of Israel," he was quoted as saying. "This will provide the basis of fortifying our armed forces with capabilities that we likely never would have obtained."He added that the Honduran military will go about this by "using technology from the latest generation" of Israeli military innovation to boost its abilities.The government in Tegucigalpa reportedly seeks to reinforce its military with Israeli expertise largely in order to combat organized crime in the country, which Hernández said has increased over the past 15 years. He noted that the lack of support from state institutions, such as the army, led to the rise of illicit activities in the country.The Honduran president made the announcement of the pact with Israel on Sunday during a military demonstration marking the 52-year anniversary of the establishment of the country's Second Airborne Infantry Battalion.