In September, Corbyn rejected claims of institutional tolerance for antisemitism at the party’s annual conference.

By EYTAN HALON
DECEMBER 8, 2017 03:14
Israeli Internal Security Minister Gilad Erdan
(photo credit: MARC ISRAEL SELLEM/THE JERUSALEM POST)
Advertisement
Israeli Internal Security Minister Gilad Erdan launched a stinging attack on the British Labour Party on Wednesday, accusing its leadership of holding "antisemitic views."“We recognize and we see that there are antisemitic views in many of the leadership of the current Labour party," Erdan told The Guardian during a trip to Brussels. "We hope it will be changed. The views." Despite the claim, Erdan did not specifically accuse Labour Party leader Jeremy Corbyn of being an antisemite. “I didn’t say it," said Erdan. "I said there are views that are very close to antisemitism in the leadership of the Labour party today in the UK.”The Israeli minister did, however, allude to Corbyn's 2009 comments in which he referred to members of terrorist organizations Hamas and Hezbollah as "friends." Erdan expressed hope that "they will come to the right decisions about people in their party who don’t understand that Hamas is a recognized terror organization, that you cannot have a regular relationship with a terror organization."Leader of the opposition Jeremy Corbyn, Shadow Finance Minister John McDonnell and deputy leader of the Labour Party Tom Watson, November 23, 2017 (Reuters)The minister's Brussels visit included briefing the European Parliament's Committee on Foreign Affairs on counterterrorism and Iran, as well as addressing a meeting of the European Christian Political Movement.Corbyn’s Labour Party has been repeatedly rocked by antisemitism scandals since he was elected party leader in 2015.In September, Corbyn rejected claims of institutional tolerance for antisemitism at the party’s annual conference following renewed claims of discrimination within the party's ranks.“This is not a nasty party... Anyone using antisemitic language, anyone using any form of racist language, is completely at odds with the beliefs of this party.”In November, three of Britain's most prominent authors slammed the Labour leadership's "derisory" reaction to antisemitism in an open letter to The Times that garnered considerable public attention.“We are alarmed that during the past few years, constructive criticism of Israeli governments has morphed into something closer to antisemitism under the cloak of so-called anti-Zionism,” wrote Howard Jacobson, Simon Sebag Montefiore and Simon Schama. 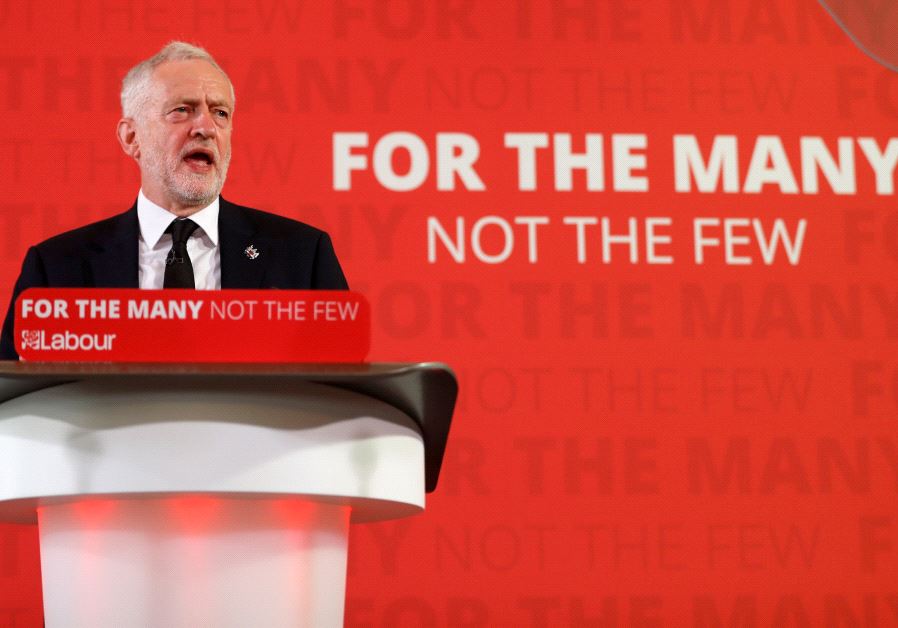 Labour Party leader Jeremy Corbyn (Reuters)An internal Labour inquiry commissioned by Corbyn cleared the party of antisemitism claims in June 2016. The investigation did find an “occasionally toxic atmosphere” in the party but concluded that it “is not overrun by antisemitism, Islamophobia or other forms of racism.”Erdan described the inquiry, chaired by Labour politician Shami Chakrabarti, as "empty."“We don’t think this committee was enough. We still follow and listen to their views and we are concerned that it will lead, it will bring, the UK to a very, very negative place. Still we are optimistic,” Erdan said.Chakrabarti was nominated for a peerage only weeks later, leading to claims that the report was a “whitewash” in return for the honor. A poll commissioned by British charity Campaign Against Antisemitism in August saw 83% of Jewish respondents state that Labour is “too tolerant of antisemitism among their MPs, members and supporters.” Only 4% felt that no UK political parties tolerate antisemitism.Under Corbyn's leadership, the Labour Party defied expectations by winning 40% of the vote in the UK's June 2017 General Election, thereby denying the ruling Conservative Party an overall majority.