Large majority of American-Jews, Israelis call for end to Orthodox monopoly in Israel

Seventy percent of American Jews and 61% of Israeli Jews said that they support establishing a pluralistic section in the Western Wall plaza to be used for egalitarian prayer services. 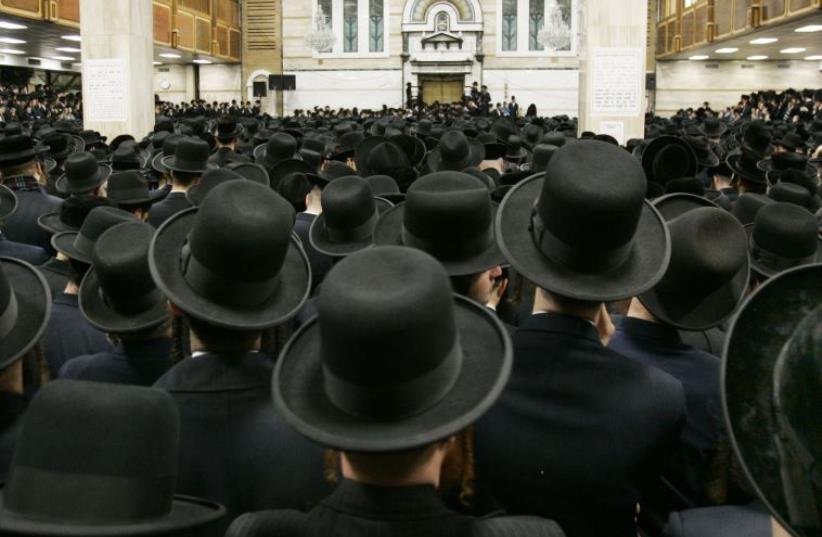 Followers of ultra-orthodox Jewish rabbi Moses Teitelbaum of the Satmar Hassidim pack the Congregation Yetev Lev D'Satmar in the town of Kirays Joel, New York
(photo credit: REUTERS)
Advertisement
A series of new polls commissioned by The Jerusalem Post in partnership with the American Jewish Committee (AJC) reveals a growing rift between the State of Israel and the American Jewish community when it comes to the Orthodox monopoly over religion- and-state issues in Israel.The polls reveal that 74% of American Jews and 62% of Israeli Jews believe that the State of Israel should officially recognize the various pluralistic Jewish denominations – namely Reform and Conservative – and allow them to conduct marriage ceremonies and conversions in Israel.The full polls will appear in The Post’s Magazine this Friday, alongside opinion pieces by the Reform and Conservative leadership in the US as well as a representative of the Orthodox movement in Israel. The polls also clearly demonstrate an acute crisis between Israel and the Diaspora surrounding the establishment of an egalitarian prayer plaza at the Western Wall, a move that has been blocked by the government due to haredi opposition, despite being approved by the cabinet earlier this year.Seventy percent of American Jews and 61% of Israeli Jews said that they support establishing a pluralistic section in the Western Wall plaza to be used for egalitarian prayer services.Forty-eight percent of American Jews said they believed that recognition of Orthodox Judaism as the official policy of the State of Israel weakens relations between Israel and the American Jewish community, whereas 39% said they don’t think this has any effect at all.Alternatively, 54% of Israeli Jews said they were opposed to allowing Orthodoxy control over matters of religion in Israel.“The Kotel is an issue of peoplehood,” said AJC director of Contemporary Jewish Life Steven Bayme. “It’s a national symbol of the Jewish people and Jewish history. US Jews might not feel strongly about how important it is when it comes to gender services, but the question is, to what extent the idea of peoplehood is still compelling to US and Israeli Jews. Peoplehood needs to be the glue binding our two communities, and when US Jews don’t see it as important, that’s disappointing,” he added.AJC has created a Jewish Religious Equality Coalition, which together with Israeli counterparts, is working to develop alternatives to the Chief Rabbinate in order to ensure freedoms to all Jews.“The chief rabbi has become more outspoken, and that has created a backlash,” Bayme said, talking to the Post just days after “traingate” saw Israel Railways paralyzed after a committee that included the Chief Rabbinate and haredi parties decided at the last minute to cancel construction work scheduled for Shabbat.“The degree of concern has risen over the past year, and at a time when we are concerned about the attachment between US Jews and Israel, religious pluralism could be one of those issues that may distance American Jews from Israel,” he added.One poll – commissioned by the Post in partnership with the AJC and conducted by the research company SSRS – questioned 1,002 American Jews over the age of 18 with a 3.57% margin of error. Another poll, commissioned by the Post and conducted by the Rafi Smith Polling Institute, questioned 500 Israeli men and women over the age of 18, with a 4.5% margin of error.The full polls will appear in this Friday’s Magazine.