Lipman was not re-elected to the Knesset in the March 17 election, as he was 17th on Yesh Atid's list which won 11 seats. 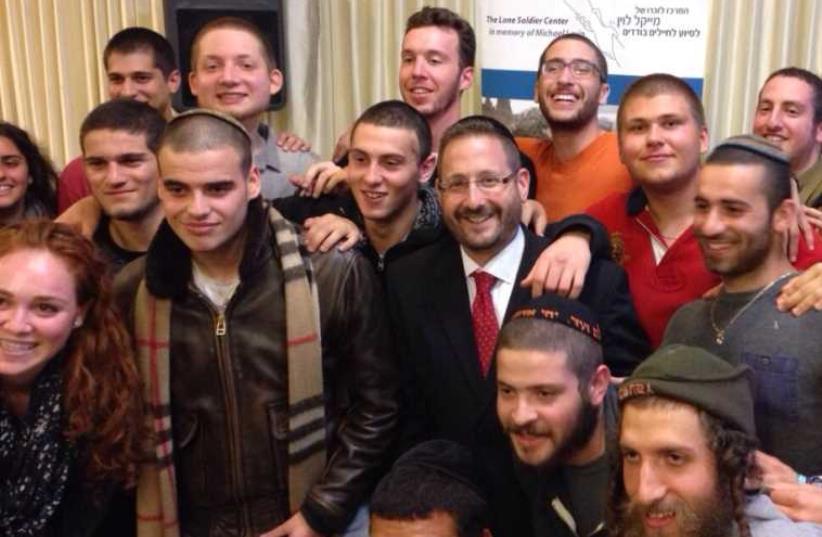 Former MK Dov Lipman with lone soldiers at a Thanksgiving dinner arranged by the Lone Soldier Center.
(photo credit: DOV LIPMAN)
Advertisement
Former Yesh Atid MK Rabbi Dov Lipman will serve as the director of government and international affairs for the Lone Soldier Center in Memory of Michael Levin and the Families of Lone Soldiers, the organizations announced Sunday.Lipman was not reelected to the Knesset in the March 17 election, when he was 17th on Yesh Atid’s list of candidates, which won 11 seats.He will continue to keep office hours in the Knesset to help English speakers at Yesh Atid’s request in addition to his new post helping lone soldiers.For the lone soldiers’ organizations, Lipman will serve as the liaison to the Knesset and Defense Ministry. His goal will be to improve the conditions for both lone soldiers and their families.“We are excited to have Rabbi Lipman join our team dedicated to the welfare of lone soldiers and to assist the special needs of their families outside of Israel,” Dr. Lawrence Platt and Eli Fitlovitz of Families of Lone Soldiers said in a joint statement. “His proven dedication to the lone soldiers during his term in Knesset and his availability to the parents is well recognized. Our organizations are indeed most fortunate and we look forward to a long association with him.”Josh Flaster, national director of the Lone Soldier Center in Memory of Michael Levin, said his organization was “honored to have a gifted, courageous and extremely motivated leader like former MK Rabbi Lipman join our family.”Flaster said Lipman has dedicated his life to bettering and enriching the lives of Jewish youth.“We are very excited to work together with Rabbi Lipman and Families of Lone Soldiers to collectively better the lives of 6,000 lone soldiers in the State of Israel and their families abroad,” Flaster said.Lipman said that during his two years in the Knesset he became more acquainted with the challenges faced by lone soldiers – both while Israel is at war and in quieter times.He noted that 44 percent of the lone soldiers in Israel come from haredi backgrounds.Lipman said he saw assisting them as a natural continuation of the work he was doing with haredim when he was in the Knesset.“These young men and women along with their families are nothing short of an inspiration and I look forward to helping the cause,” Lipman said. “They have real needs to help them prepare for their service, during their service and finding employment after their service, and I intend to work towards legislation and policy adjustments to improve their situation.”