The night before, hundreds marched in central Jerusalem in support of Azaria. His trial has led to major controversy in Israel and sparked political tensions. 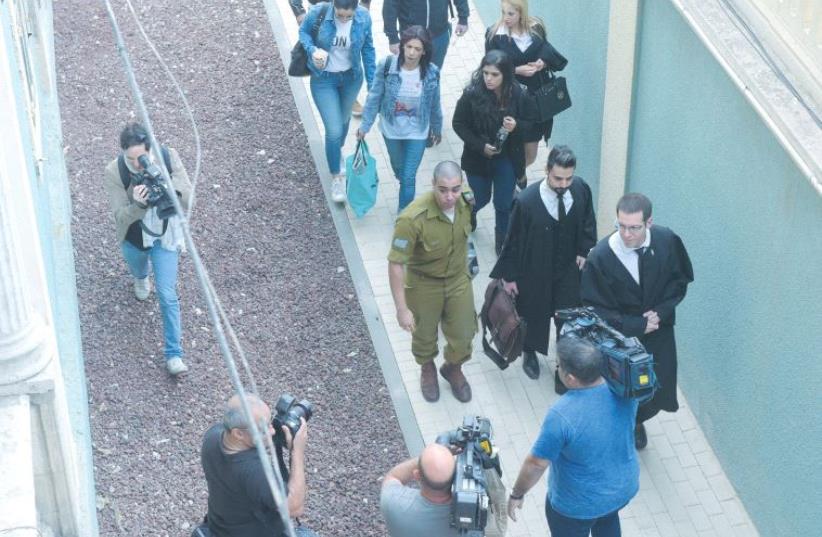 SGT. ELOR AZARIA (in uniform) arrives at the Jaffa Military Court
(photo credit: AVSHALOM SASSONI)
Advertisement
The final stage of the trial of Sgt. Elor Azaria, on trial for manslaughter for shooting terrorist Abdel Fatah al-Sharif in the head, took place on Wednesday as both the prosecution and defense presented their oral submissions.The night before, hundreds marched in central Jerusalem in support of Azaria. His trial has led to major controversy in Israel and sparked political tensions, with far-right supporters calling for the soldier’s release, and human rights groups labeling the killing a summary execution.The oral summation stage was opened by prosecutor Nadav Weisman, who told the Jaffa Military Court that he had “found no legal precedent that found fit shooting someone in the head without any warning.“If the court would have asked me to summarize this whole case in a minute, I would have shown the video that depicts the behavior of the accused immediately after the shooting,” he said.“In the video he is seen walking down the street with his friends after the shooting, not saying a word about an explosive vest that he claims that he saw and which was the reason behind him shooting the terrorist.The accused isn’t seen warning his friends or anyone else about a bomb that he suspected that the terrorist was carrying.It doesn’t make any sense and it contradicts his claim.”According to Weisman, Azaria changed his version of the event several times. “A defendant who keeps changing his version, even in front of the court, is someone who realizes there’s a problem with his initial version.”The real reason behind Azaria’s decision to shoot, Weisman said, was the preceding actions of the terrorist, who had just stabbed his friend.Weisman also said that there are contradictions between the objective findings on the ground and Azaria’s version, and that there were even indications that he gave false testimony.“Records show Azaria didn’t mention fear of an explosive vest to his battalion commander.But in court he said he did,” Weisman said.Another claim that the prosecution mentioned to the court was that Azaria said he was slapped by his commander “in front of everybody.” But no other witness mentioned the slaps. The defense later changed its version to say Azaria and his commander were alone when slaps occurred.Azaria claims he thought Sharif’s heavy coat was suspicious and that he had moved just before Azaria shot him. But Weisman told the court that it was not 30 degrees, as Azaria claimed, but 19 degrees, and four other people are seen wearing jackets in the video.“Is everyone lying and it’s only Azaria telling the truth?” Weisman asked the court. “Lies upon lies upon more lies.”According to Weisman, Azaria changed his version of the incident too many times, falsely accused officers, and therefore “does not deserve to be trusted.”Following the summations of the prosecution, Azaria’s defense attorneys presented theirs to the court.According to the defense, which has asked the court to acquit Azaria of all charges, there have been several other cases that are similar to Azaria, most of which never even made it to trial. Azaria’s case, they stated, was different because of outside interference by former defense minister Moshe Ya’alon and current IDF Chief of Staff Lt.-Gen. Gadi Eisenkot, who condemned Azaria before the trial even began.In response, the judges stated that it was in fact statements by supporters of both sides who may have “infected the trial.”But according to the defense, the comments made by those higher up in the military echelon had a direct effect on Azaria’s commanders, who towed the military line in court in favor of the prosecution.Azaria’s defense attorney Eyal Basserglick asked the court, “So what if he said that sentence” (referring to the statement Azaria is alleged to have made to a fellow soldier), stating that his hands were covered in the blood of his friend, whom he had just treated, after his friend had been stabbed by Sharif.According to Basserglick, it is impossible to assume that reasoning was the motive behind his actions.The final verdict is expected to be delivered in the next two weeks.