Herzog: Israel owes it to its fallen soldiers to pursue peace 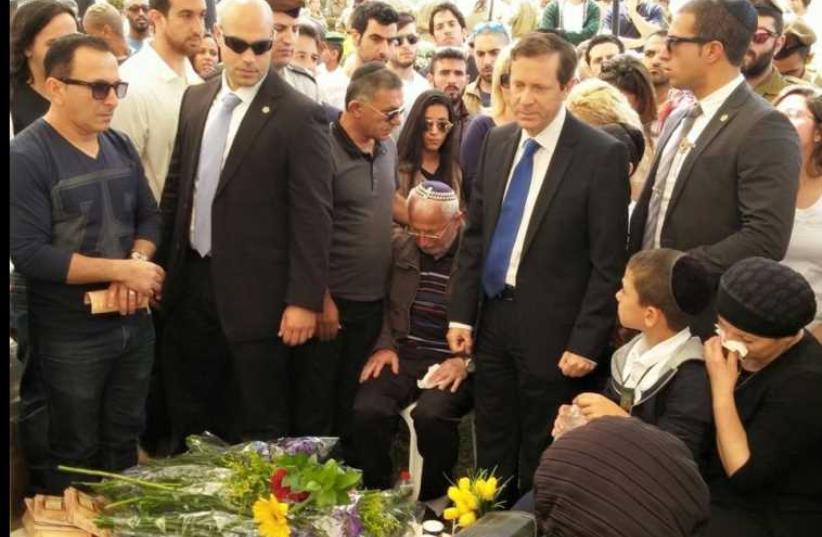 Zionist Union leader Isaac Herzog pays his respects to the fallen at the military cemetery in Ashkelon
(photo credit: FACEBOOK)
Advertisement
Politicians from across the political spectrum spoke at cemeteries Wednesday on Remembrance Day, paying tribute to fallen soldiers interspersed with political messages.Speaking at the military cemetery in Ashkelon, Zionist Union leader Isaac Herzog invoked the memories of the fallen to justify his support for pursuing a diplomatic agreement with the Palestinians.“We must do everything possible to strengthen our security and pursue peace as an ethical obligation to all those who sacrificed their souls for the State of Israel and for future generations,” Herzog said. “The price of peace is not easy to pay, but the price of war is unbearable.”Herzog said every rock and gravestone at the military ceremony has a story to tell about the latest link in the chain of the Jewish people.“This year, too, we endured the pain of Ashkelon and the surrounding areas that were hit by missiles in Operation Protective Edge,” Herzog said.“We lost soldiers and dear citizens. We once again saw the strength of our wonderful nation that built a strong democracy amid great dangers. This past summer we also saw solidarity and unity that give us infinite power to go on.”His Zionist Union colleague, MK Tzipi Livni, vowed to continue her efforts to defend the IDF from international courts and tribunals.“Israel’s struggle for its existence as the state of the Jewish people and its fight against terrorism cannot be judged by foreigners through a twisted lens,” she said at the military cemetery in Afula. “The IDF is an ethical army and i will not let anyone claim otherwise. Its battles cannot be equated with the actions of the terrorists who target Israeli citizens.”Yesh Atid chairman Yair Lapid also addressed Operation Protective Edge when he took part in the official Remembrance Day ceremony at the military ceremony in Ra’anana as a representative of the state.“This past summer I spent my nights in the security cabinet and divided my days between visits to communities in the South who were under fire and visits to bereaved families,” he said. “They call it comforting the mourners, but the mourners cannot be comforted and it might not even be the role of the government to comfort.The role of the government is to tell them, to tell you, the truth: that sometimes there is no choice. That it isn’t right that they died, but that they died for the most just cause in the world. That it is due to them that we have a State of Israel, that it is due to them that we stand here today.”Lapid lamented: “You sit with the families and your throat is choked. Sometimes out of sadness, sometimes out of pride. You sit there and know what every person here today already knows – that there are no shortcuts. That pain has its own timetable.That it is true that life goes on, but it isn’t the same life.Speaking at the military cemetery in Rishon Lezion, Bayit Yehudi leader Naftali Bennett said the message of Remembrance Day is the power of the people of Israel when they unite against all odds.“In every generation a different enemy comes and tries to destroy us,” he said, quoting from the Passover Haggada.“Their idea and their motivation are identical: hatred and cowardice. Hatred for the Jewish people and the values that it represents and cowardice to deal with such values. Enemies who have no common border with us in Iran and enemies who have no ethical border with us in Gaza need to be told the people of Israel is united in days of joy and in days of pain with no boundaries between ourselves. In the face of a united Israel and all of its boundless goodness, no evil can stand.”