More than a week after flames are doused, Jewish-Arab relations continue to smolder. 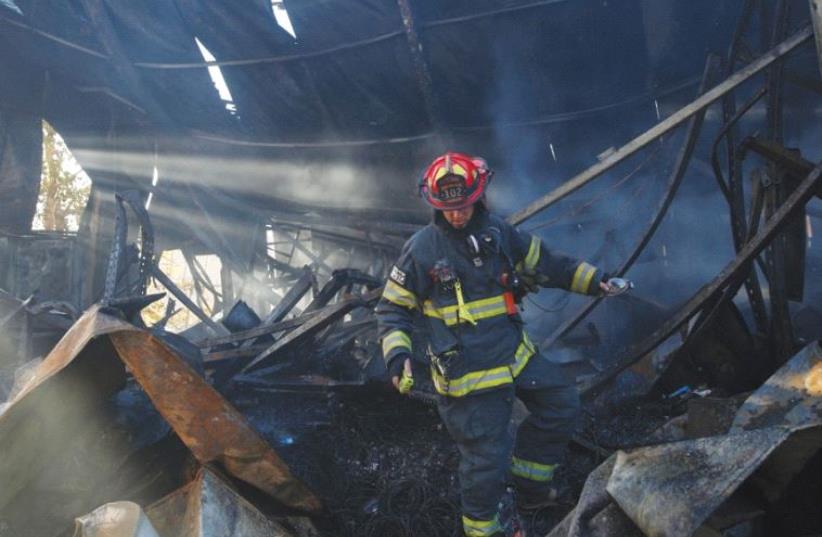 A FIREFIGHTER WALKS inside a building destroyed by fire in Beit Meir, near Jerusalem, in November
(photo credit: REUTERS)
Advertisement
Recrimination over the recent wave of fires resounded Monday as an Arab member of the Knesset accused the government of adopting the tactics of Nazi propaganda minister Josef Goebbels to incite against the Arab minority.Aida Touma-Sliman (Joint List) said that statements by Prime Minister Benjamin Netanyahu, Public Security Minister Gilad Erdan, Education Minister Naftali Bennett and Culture Minister Miri Regev blaming the wave of fires on terrorist arson had been disproved by the fact that only three indictments have been issued for 1,773 reported fires.“That says it all,” she told The Jerusalem Post. “The problem is not the accusations themselves, but how many times these campaigns of racism [have been] raised,” she said.
Fires rage across Israel. Video: Ariel Kedem, National Parks Authority.
“It’s a very clear [use of] the Goebbels method of lie and lie and lie and lie and eventually people will believe something.”The comments made by Touma- Sliman point to simmering anger over being blamed for the blazes, unjustly in the view of the Arab population, and suggest that while the fires have been doused, relations between the Jewish majority and Arab minority continue to smolder.Erdan and Regev have dug in during the past few days, sticking to their views that terrorism was the primary cause of the fires and citing the police as saying that 29 out of the 39 worst fires are being treated as arson or suspected arson.Thirty-nine people were arrested on suspicion of arson after the blazes began on November 18 and at least 29 have been released, according to Channel 2.Authorities still haven’t determined the cause of the biggest blaze, in Haifa. Ran Shelef, the Fire and Rescue Authority’s chief investigator told the Post on Sunday that authorities found evidence of arson in four areas: the Galilee, the area from Umm el-Fahm to Beitar Illit, the West Bank and the central region. But police declined to comment and another authority investigator said in remarks on Friday to Channel Two, that the cause of the blazes in the northern district is unknown.Touma-Sliman said that Netanyahu has also incited against Arabs in the past, including after a deadly shooting in Tel Aviv by an Arab citizen in January and on election day in March 2015, when he said Arabs were heading to the polls in “droves.” Netanyahu apologized for the latter statement in July.“If you lie and lie and lie, something will stay in the awareness or subconscious of the people and this is how it’s working,” Touma-Sliman said.“It’s again revealing the ugly racist face of the government. If you are the leader, the prime minister, then of course you are responsible for everything your ministers are saying, [and] what you are saying.”Netanyahu’s office did not respond to a request for comment.But a spokesman for Regev stood by a comparison the minister made between the fires and the 1929 massacre of Hebron’s Jewish community.“The minister compares between terrorist attacks in the past and terrorism today. Both tried to burn, kill and hurt the Jewish people,” the spokesman said.Mohammed Barakeh, chairman of the Arab Higher Follow- Up Committee, said they would ask Attorney-General Avichai Mandelblit to investigate Netanyahu for incitement.Barakeh said: “Netanyahu knows the truth. He is not a private person, he has access to intelligence sources. Inciting racism and impugning an entire public is not covered under freedom of expression.” Netanyahu’s office declined to respond.Of the three people indicted for arson, two are minors.In the third case, the accused, Ali Mahajane, 24, burned trash near his home in Umm el-Fahm. He said he did this due to lack of municipal garbage disposal services.In what may be the most high-profile suspected arson case, Jawad Katoush, 43, from Battir in the West Bank, was released on December 1 after being imprisoned for five days and interrogated by the Shin Bet (Israel Security Agency).On the day of his arrest, police released video footage of him appearing to set a fire.“Usually, in a situation like this, if they had found something against him they would keep him under arrest and submit an indictment,” said Gaby Lasky, his lawyer. She said he set the fire meters away from his home on agricultural land he owns to prepare the ground for planting, as he does every year.“He set the fire and then he put out the fire. Whoever saw him setting the fire also saw him putting it out,” she added.A police spokeswoman said the case is still open and Katoush is still suspected of arson. But Channel 2 reported that authorities had accepted his explanation.