MK Zahava Gal-On accused Netanyahu of using the fires to bury his own submarine scandal. 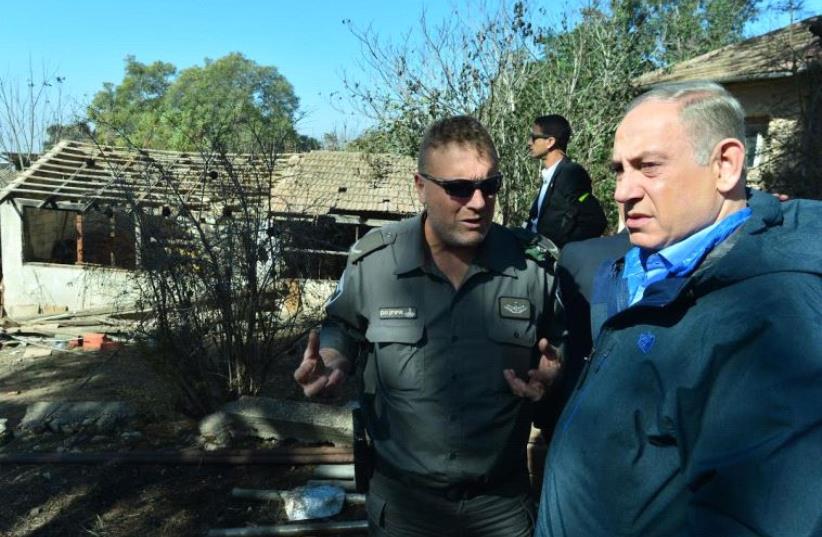 Prime Minister Benjamin Netanyahu visits fire torn Haifa
(photo credit: KOBI GIDEON/GPO)
Advertisement
Prime Minister Benjamin Netanyahu deliberately encouraged arsonists to ignite fires in an effort to divert attention from a scandal over German submarines, Meretz leader Zehava Gal-On told The Jerusalem Post Monday.The scandal over a German company hiring Netanyahu’s personal lawyer and confidant David Shimron ahead of a massive deal to purchase vessels for the Israeli navy dominated headlines in the days ahead of the fires. But once the conflagrations spread, the scandal shifted to inside pages of the papers.“There was a deliberate maneuver by the prime minister to distract the public from the submarine affair,” Gal-On said. “The way he called the attacks arson and terror at such an early stage only led to more incidents of arson, which served him.”Gal-On said she agreed with a controversial Facebook post of Peace Now cofounder Amiram Goldblum, who wrote that “Netanyahu’s incitement intifada is raging across the country,” and “It’s difficult not to see the connection between Netanyahu’s incitement following the arsons and the submarines scandal.”While Netanyahu’s spokesman declined to respond, coalition chairman David Bitan, who is close to the prime minister, reacted by saying that “the extreme Left lost its mind a long time ago.”Peace Now director-general Avi Buskila distanced the organization from the comments, stressing that Goldblum has not been with Peace Now for many years and calling what he wrote and Gal-On later said “a harsh, baseless accusation.”Zionist Union faction head Merav Michaeli said she did not agree with the accusations.“I won’t counter incitement with incitement by saying what she said,” she said. “We don’t incite against Netanyahu, but we legitimately criticize him. He often incites to distract the public but I won’t say he caused more people to start fires.”The German business daily Handelsblatt reported on Monday that the delivery to Israel of an advanced submarine to be called Dakar is now subject to delay. The German-built underwater vessel is slated to be sent in two years but there is a dispute over who should pay for additional weapons technology embedded in the submarine.According to the paper, “The boat has to be lengthened” to accommodate the weapon system. Handelsblatt said “informed” sources reported the spat between ThyssenKrupp – the manufacturer – and Israel.Israel awarded ThyssenKrupp a contract worth €500 million in 2015 to manufacture four patrol boats. The four corvettes are now a new lightning rod in the dispute between Miki Ganor, Israel’s ThyssenKrupp representative, and the company.The paper said Ganor commenced the patrol boat deal and was aided by Shimron, who inquired at the Defense Ministry’s legal department about the tender for the patrol boats and told Handelsblatt: “I did this for Mr. Ganor and was not tasked by ThyssenKrupp.”The Knesset’s Committee on Transparency, headed by Zionist Union MK Stav Shaffir, met Monday for deliberations on conflicts of interest in Netanyahu’s employment of Shimron and his law firm copartner Isaac Molho.Justice Ministry representative Danny Horin told the committee that his office was reconsidering its current methods for checking conflicts of interest among volunteer advisers like Shimron and Molho. Shaffir urged him to make the change immediately.