“We have no doubt that the Obama Administration initiated it, stood behind it, coordinated the texts, and made sure it passed.” 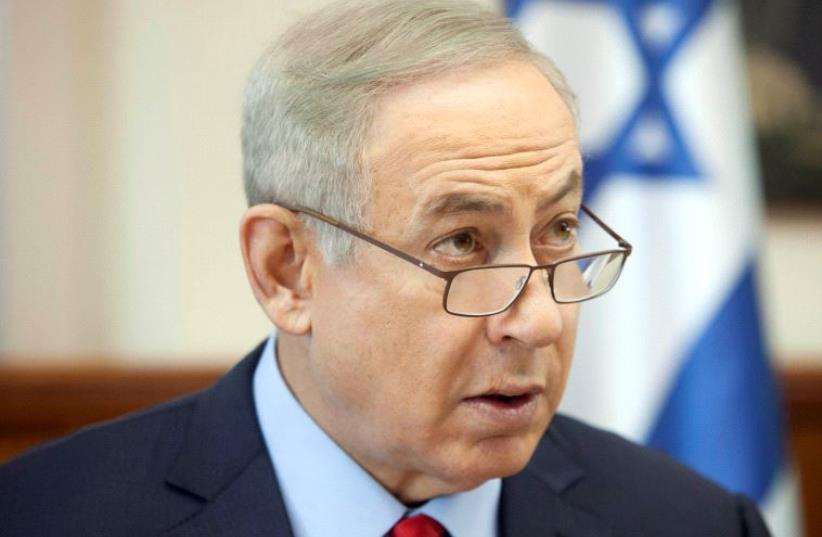 Benjamin Netanyahu
(photo credit: REUTERS)
Advertisement
Sunday morning's cabinet set the stage for several strong comments from Prime Minister Benjamin Netanyahu, but the major one was that the prime minister has instructed the Ministry of Foreign Affairs to summon the ambassadors of the 12 countries in the Security Council with whom Israel has diplomatic ties for a talk in which Netanyahu is expected to reprimand them for the anti-Israel resolution that was passed on Friday. The summoning of the representatives, though expected, was unusual at is took place on Christmas Day.The Ministry of Foreign Affairs has already summoned the ambassadors from China, Russia, France, the UK, Spain, Egypt, Japan, the Ukraine, Angola and Uruguay. Seeing as this summoning is taking place on Christmas, the majority of the ambassadors are on vacation in their countries and in some of the cases, their deputies or lower ranks are expected to come in their place. Another topic that was introduced in the cabinet meeting was Netanyahu's accusations against the Obama administration.
Netanyahu: Israel to reassess UN ties after settlement vote
The anti-settlement resolution passed by the UN Security Council on Friday may have been initiated by New Zealand, Senegal, Venezuela and Malaysia, but US President Barack Obama's administration initiated it and shepherded it through, Netanyahu stated.Stepping up angry rhetoric against the administration, he said at the outset of Sunday's cabinet meeting that he shared the “anger and frustration” felt by the ministers around the table at the “imbalance and “very hostile resolution” against Israel.“We have no doubt that the Obama Administration initiated it, stood behind it, coordinated the texts, and made sure it passed,” he said. “This is  of course, in complete opposition to traditional US policy which committed itself to not trying to impose permanent agreement conditions, or anything connected to them,  in the UN Security Council.”Netanyahu said this was also a clear contravention of Obama's own commitments on the matter made publicly in 2011.Turning to English, in his first English comments on the matter, the prime minister said he spoke to US Secretary of State John Kerry on Thursday and said “friends don't take friends to the Security Council.”“US administrations and Israeli governments have disagreed about the settlements for decades, but there was an agreement that the Security Council was not the place to resolve this issue,” he pressed on.“We knew that going there would make the negotiations harder, and drive peace further away,” he said. The premier said he was “encouraged” by the statements being made by both Republican and Democratic friends in the US, though he did not specify whom he was referring to.“They understand how reckless and destructive this UN resolution was, they understand that the Western Wall isn't occupied territory,” he said. “ I look forward to working with those friends and the new administration when it takes office next month.”Netanyahu said the government would do “everything needed to ensure that Israel is not harmed by this shameful resolution.” He called on the Foreign Ministry to present an action plan within a month of steps that can be taken toward the UN and other international organizations.At the same time, he urged his ministers to act “wisely, responsibly and calmly.” He said that the security cabinet would meet Sunday afternoon, and that the ministers should act on this issue according to directives that will come out of that meeting.Dana Somberg contributed to this report.